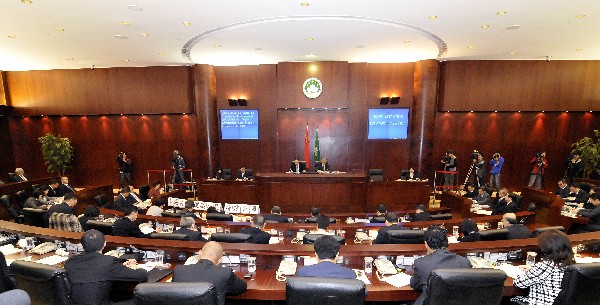 Executive Council (ExCo) spokesman Leong Heng Teng announced in a press conference at Government House Monday that the 10-member advisory body has finished discussing the government’s two amendment bills on the methods of electing the chief executive (CE) and the Legislative Assembly (AL).

Under the proposed changes, the Chief Executive Election Committee will comprise of 400 members, an increase of 100 from 300 (known as “+100”).

The new membership structure breaks down as follows: 120 members from the industrial, commercial and financial sectors, 20 more than before. 26 cultural subsector representatives (+8 members), 29 from the educational subsector (+9), 43 from the professional subsector (+13) and 17 from the sport subsector members (+5).

The number of members from Macau’s religious subsector remains unchanged, with two each for Catholics and Buddhists and one each for Protestants and Taoists.

The committee will also include 22 lawmakers (+6), 12 National People’s Congress (NPC) deputies from Macau (same as now) and 16 local members of the National

Leong was quoted as saying by The Macau Post Daily that the legislative election amendment bill proposes that one each of the legislature’s two additional indirectly elected seats be given to the professional subsector and the culture and sport subsector.

Currently, candidates in the indirect elections for the legislature that stand uncontested are automatically given their seat.

Leong said that the “automatic election” mechanism would be eradicated, so that all candidates would have to submit themselves to an electoral process. Indirect election candidates are elected by representatives of labour, business, professional, cultural, sports and other associations.

The ExCo spokesman said this proved that a step forward had been made in the progress of Macau’s political development.(macaunews)