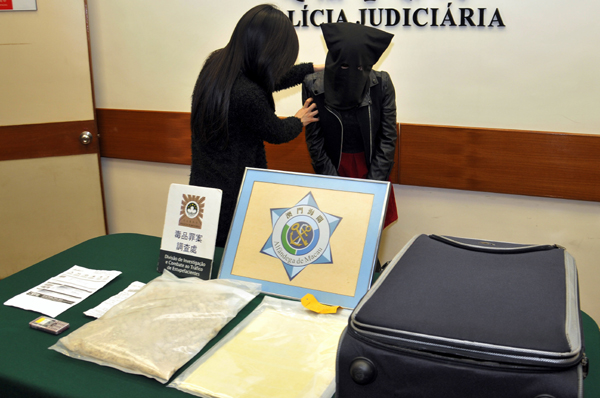 Macau, China, 9 Dec – Macau’s police have netted a massive drug haul of slightly over two kilos of cocaine in a 21-year-old woman’s luggage, which they say would fetch some HK$ 2 million (US$ 250 thousand) on the streets.

The suspected trafficker, a young woman from the relatively impoverished southern autonomous region of Guangxi Zhuang, flew into Macau late Tuesday on a flight out of Kuala Lumpur.

According to a Judiciary Police (PJ) spokesperson, the massive packs of the party drug were discovered during a regular baggage check by Public Security Police (PSP) and Customs Service (SA) officers at the Macau International Airport.

A sniffer dog raised the alarm, but after cursory examination officers put the suitcase out on the carousel and then swooped when the suspect, surnamed Shi, went to collect it, the spokesperson said in a special press conference yesterday.

The officers found a total of 2.1 kilograms of cocaine worth HK$ 2 million inside Shi’s luggage.

Shi told police she had been told she would receive just 1,000 yuan for carrying the drugs into Macau, the spokesperson added.

The PJ also found that Shi had entered Macau in a similar way in both October and November, and the spokesperson said they suspected Shi had successfully trafficked drugs into the mainland through Macau at least twice in the past.

Acording to The Macau Post Daily Shi will be transferred to the Public Prosecution (MP) today for further investigation and possible arraignment on charges of drug trafficking, facing at least eight years behind bars if found guilty.