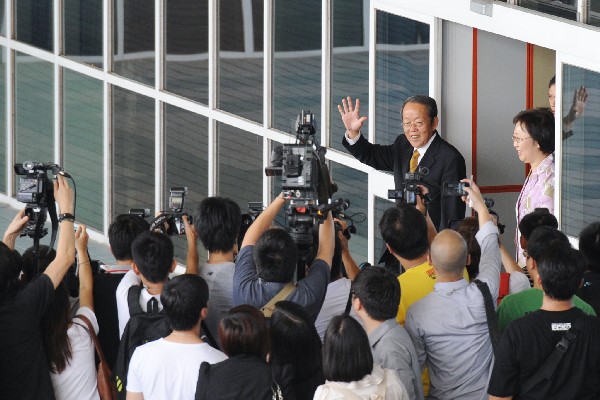 Wang arrived from a three-day working visit to Hong Kong .

Chief Executive Fernando Chui Sai On and Macau ’s principal officials, including all the five policy secretaries, met Wang for a one-hour closed-door meeting at Government House soon after his arrival.

According to a statement released by the Government’s Information Bureau  (GCS), Chui introduced the local government’s policies and development plans to Wang during the working meeting.

The GCS statement also said that Wang praised Chui’s effort in setting up a “transparent” government. Wang also said that the central government appreciated the “pragmatic and dedicated” governance by the local authorities, namely its effort to improve residents’ living standards and ensure social stability.

Xinhua said that before the meeting Wang had paid a courtesy call on former chief executive Edmund Ho Hau Wah, who is now a vice-chairman of the National Committee of the Chinese People’s Political Consultative Conference (CPPCC).

In the evening, Wang paid a very brief visit to the Grand Lisboa casino.

Wang visited the San Kio and Fai Chi Kei districts and will hold a meeting with community representatives.

The career diplomat has headed the HKMAO since last October.

It is his first working visit to Macau as HKMAO director. He accompanied Premier Wan Jiabo on the latter’s first visit to the city in November.

Wang is scheduled to return to Beijing Thursday.(MacauNews/Politics)