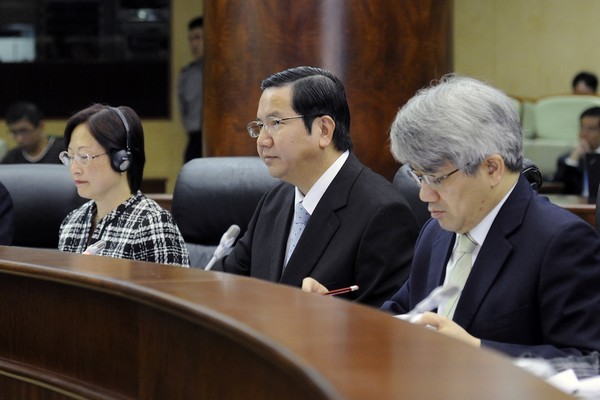 The government’s vowed Thursday that it would submit a bill to the legislature to deal with medical malpractice by the end of the year.

Secretary for Social Affairs and Culture Cheong U made the promise in the legislature’s hemicycle THursday.

Cheong, accompanied by senior officials of his policy portfolio, was in the legislature to answer lawmakers’ questions about his 2013 policy guidelines. The two-day Q&A ends today.

During the four-and-a-half-hour plenary meeting, 10 of the 29 lawmakers present raised questions on different aspects of Cheong’s policy guidelines such as how to improve the quality of medical services and tertiary and non-tertiary education, how to further diversify local tourism, as well how to protect the city’s cultural heritage, improve cultural education among locals and strengthen benefits for the city’s teaching staff.

Directly-elected lawmaker-cum-businessman Chan Meng Kam said during the meeting that locals repeatedly complain that they have to wait a long time before they can see a doctor in the public health system.

“Residents often question why the government has failed to tackle the matter although it has a lot of money … residents have to wait about a month before they can see a general practitioner, for heart disease the waiting list is about three months … ,” Chan was quoted by The Macau Post Daily as saying, pointing out that the government has increased its budget for the public health system from 1.23 billion patacas in 1999 to 5.2 billion patacas next year.

Chan also criticised the government for its delay in completing the bill regulating medical malpractice.

Grassroots lawmaker Chan Wai Chi, who is a middle-school teacher, also slammed the government for failing to tackle the matter.

Directly-elected lawmaker Ho Ion Sang, who is a vice-president of the Macau General Union of Neighbourhood Associations (popularly known as Kai Fong), urged the government to come up with ways to improve the public health services.

Responding to lawmakers’ criticisms, Cheong said that the Health Bureau (SSM) had completed the revision of the bill dealing with medical misconduct.

He said that the legislation on medical malpractice was an important move in the reform of the medical system.(macaunews)