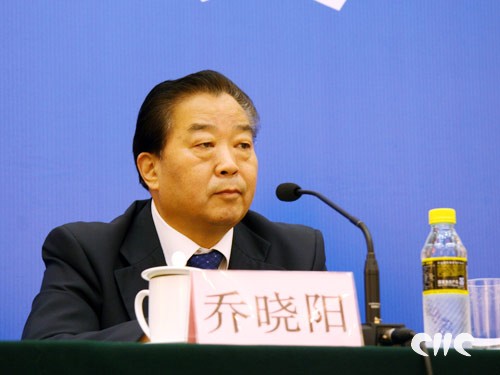 According to The Macau Post Daily speaking to reporters on the sidelines of the opening and closing ceremonies for a Macau Basic Law course for public servants at the Macau World Trade Centre, Qiao said that the interpretation of the NPC Standing Committee on possible changes to the method of electing the chief executive and forming the legislature was the same for both the Hong Kong Basic Law and its local counterpart.

Qiao, who chairs both the Basic Law committees of Hong Kong and Macau, made the remark when asked by reporters whether Macau needed to follow Hong Kong ‘s "five-step" political reform pace if it wanted to make changes to how the chief executive is elected and the legislature is formed.

The China Daily Hong Kong edition of April 15 quoted Qiao as saying in Beijing on the previous day that "all (the) five steps must be completed, step by step, before Hong Kong could implement its political reform plans.

The newspaper, which has official status in the mainland, enumerated the "five steps" as follows: "To change the electoral methods for electing the Chief Executive (CE) and forming the Legislative Council (LegCo), the Hong Kong SAR government must have the authorization of the NPCSC, submit the reform package to the LegCo, obtain a two-thirds majority passage in the legislature, have (the) consent of the CE, and finally receive endorsement by the NPCSC."

Speaking yesterday, Qiao pointed out that the regulations enshrined in the Annexes I & II of the Basic Laws of Hong Kong and Macau "are the same."

Qiao, aged 65, said that since the contents of the two annexes in either Basic Law was the same, because of which "it can be said that the [2004] interpretation [of the NPCSC concerning Annexes I & II of the Hong Kong Basic Law] is the same (as far as the two annexes of the Macau Basic Law is concerned).

Asked by reporters when Macau should start its political reform process, Qiao merely said that any such move must be in accordance with the Macau Basic Law.

Qiao, who came to Macau just to take part in Tuesday’s ceremonies, is a graduate of the Beijing Language and Culture University . He has been a member of the Communist Party of China (CPC) since 1974.