As the National Director of Macau Special Olympics, Hetzer Siu has been building a career in athletics for decades. 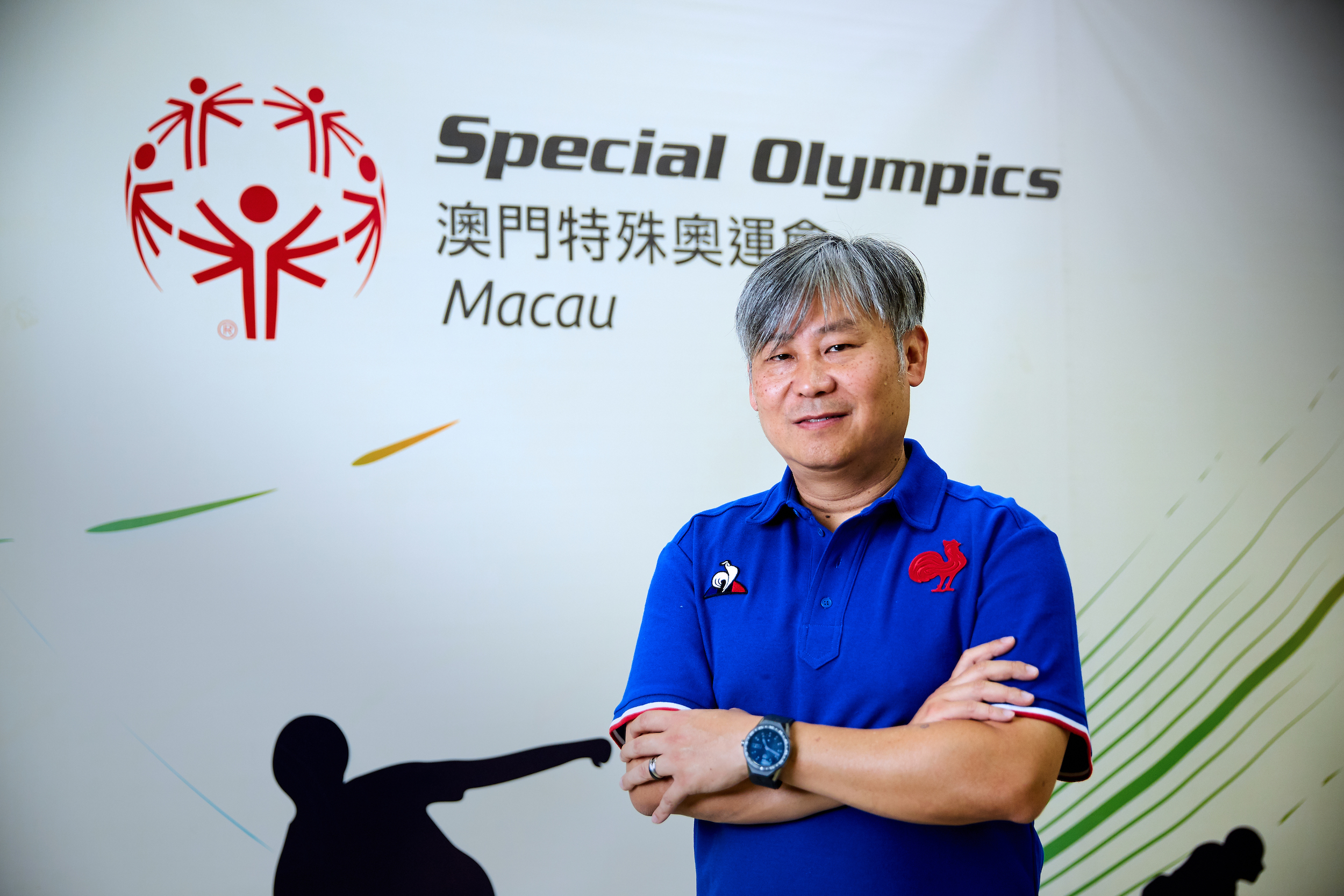 As the National Director of Macau Special Olympics (MSO), Hetzer Siu has been building a career in athletics for decades. So it comes as a surprise to hear that he had little interest in sports growing up. A self-confessed “fat boy” in his early years, Siu remembers himself as a class jester, more interested in chatting with classmates than a game of pick-up footy.

That may have had something to do with the fact that he was one of very few boys to attend Sacred Heart Canossian College Macau, which is traditionally an all-girls school.

“Our home was nearby, so my parents chose the school closest to us. Sacred Heart is an all-girls secondary school. But in primary, they expect to have a few boys as students.”

Siu didn’t mind being a minority among his mostly-female student body, but says it caused a delayed interest in the world of athletics.

“When you’re a boy in a girl’s primary school, you tend to avoid playing sports with the girls because you want to play ‘boy sports’, not ‘girl sports’. At my school, everyone wanted to play volleyball, but I thought boys should be playing football or basketball… so instead I just avoided sports entirely in primary.”

That changed somewhat when he moved to Instituto Salesiano as a teenager. “My secondary school is very famous for its football team, so sometimes I would play a game with classmates,” he says, adding that his working class family, who emigrated from Hong Kong, didn’t have much money to spend on sporting equipment for Siu and his younger brother.

Born in February 1968, Siu’s family moved from Hong Kong to Macao when he was just two years old. He could hardly have known that he would grow into one of Macao’s most impactful figures in the local community.

After graduation, Siu joined local electricity company, Companhia de Electricidade de Macau (CEM), as an electrical technician in 1986. Several of his friends from school had done the same, and he looks back on the job fondly as the heady days of his youth.

“There were about 10-12 of us on staff at the electricity company, right out of school,” he laughs. “You can imagine what teenagers like that get up to, and I was always the one to do the craziest things.”

The power of sports

His position at CEM left him with plenty of free time and in 1988, a friend suggested he try volunteering. He discovered volunteer coaching roles with Macau Special Olympics, which piqued his curiosity.

Despite his late interest in sports, Siu still believed it could be a powerful motivator. In his own life, Siu had been meeting with former classmates every Sunday – even on holidays – for a weekly football game. The idea of helping people with intellectual disabilities through sports resonated with him, so he joined MSO.

Founded in 1983 by volunteers, the Macao branch of Special Olympics International supports adults and children with intellectual disabilities, campaigning for a more inclusive society through athletic competitions and social support programmes. In 1987, MSO was formally established and registered as a local non-profit organisation.

When he first joined, Siu recalls training being limited to just track and field, with training one day a week on Saturdays. The team of 12 other volunteers agreed that more could be done, and expanded the schedule to offer more training days, as well as incorporate basketball and swimming.

Volunteering at MSO turned out to be a profound growth opportunity for the young coach, who found his interactions with the athletes rewarding and refreshing.

“[Our athletes] speak directly, they say what they want and how they are feeling. They aren’t afraid to show their emotions, so it’s easy to have honest interactions with them,” says Siu of the coaching relationships that have developed into friendships.

The experience also changed Siu’s perception of people with intellectual disabilities, which he says had been largely informed by unfair portrayals in the media. Inspired by his athletes, Siu felt motivated to invest more time and energy into volunteering and changing public perceptions of disabilities.

After a few years as a volunteer, Siu welcomed a life-changing opportunity. He travelled to the US for the 1991 Special Olympics World Summer Games in Minneapolis-St Paul, Minnesota, representing MSO for the first time on an international stage outside of China. The experience afforded him a global perspective, offering real-world examples of how other countries support disabled communities.

“I realised that we are not alone in Macao and Hong Kong. The world is big, and for the first time, I could see what was being done for people with intellectual disabilities in other countries. From that moment, I thought, ‘How can I use this [knowledge] to help Macao?’”

Newly inspired, Siu enrolled at Macao Polytechnic Institute in 1995 to study social work. After the first three years, he took a couple of gap years, completing his degree in 2004.

That same year, he became a full-time social worker. “Social workers help people in need, and inspire change; MSO believes in the power of sport to develop teamwork and communication skills, which can change lives and give our participants a better life,” he says. “The mission of social workers and MSO are similar, and that’s why they both appeal to me.”

The growth of MSO

As a newly qualified social worker, Siu accepted a government job with the Correctional Service Bureau where he was assigned to Coloane Prison for the next three years. It was a challenging experience, which helped him better understand how to work within large organisations while balancing the needs of individuals.

After Coloane Prison, Siu was in need of a change. He realised that working for an NGO might better suit his personality, and provide a closer and more direct relationship with the people he was trying to help. In 2003, he joined MSO full-time as National Director, and has served in that role for nearly two decades.

“Over the past 18 years, we have provided many services, not only to people with intellectual disabilities but also to their parents and families,” he says of his tenure at the organisation, adding that many of the athletes’ parents feel more empowered to advocate for their children as a result of MSO programmes.

Much has changed over the decades. Back in 2003, for example, MSO only had 14 staff members; today, it counts 230 staff and about 1,500 volunteers who help with events. They also expanded services, providing community care and education support, in addition to sports and vocational training.

In terms of social welfare, MSO trains people in real-life working situations and helps them find suitable jobs. “More and more athletes have been employed since the vocational training and supported employment services were implemented,” says Siu.

When it comes to education, MSO has established a team of occupational therapists, physical therapists, mental-health counsellors, special education teachers and social workers. “This team aims to provide students with training in mood control, social and learning skills and help them better fit into school life.”

Of the proudest moments in his career, Siu says, was the creation of a special education needs (SEN) service in 2009. Expanding MSO from the sports arena to Macao’s classrooms, the programme offers a range of services to students with special needs, including physiotherapy, occupational therapy, speech therapy, and physiotherapy.

“There are around 1,700 SEN students in Macao, and we provide services to about 60 per cent of them,” he says with pride.

After decades of caring for others, Siu says he’s looking forward to one day retiring and spending more time with his wife – a primary school teacher – reading books on history, sociology and philosophy and building models (he’s built over 1,000 sets in his collection at home).

But even when Siu does step down one day, it’s unlikely that this life-long MSO supporter will vanish completely. He plans to cheer his athletes on from the sidelines, even in retirement.