Herbal tea, incense sticks, elaborate wedding dresses… What do they have in common? These Intangible Heritage elements, and many more, can be found around the Ruins of St Paul’s neighbourhood.

When the Macao government added 55 Intangible Heritage items to its intangible cultural heritage list in 2020, the move dramatically expanded the existing list of 15 elements announced in 2017. Handed down for over 450 years, each of these 70 elements has a story of its own. And under the government’s protection, these unique handicrafts, artforms, religious festivals and culinary delights will be safeguarded for generations to come.

So where can you find them? Considered Macao’s Historic Old City Centre, the Ruins of St Paul’s neighbourhood is brimming with intangible heritage elements, including time-honoured crafts such as herbal tea brewing, incense sticks manufacturing and Chinese wedding dress tailoring. 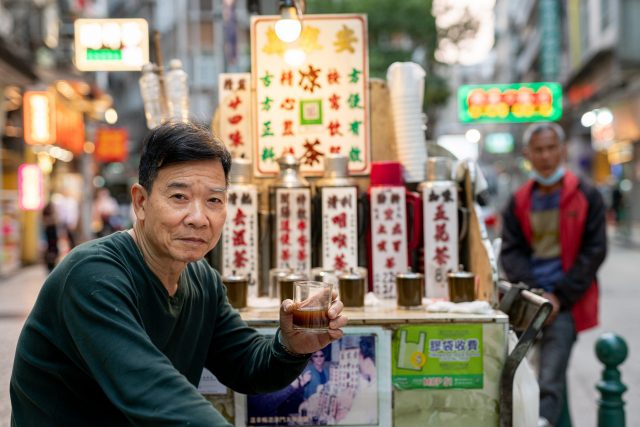 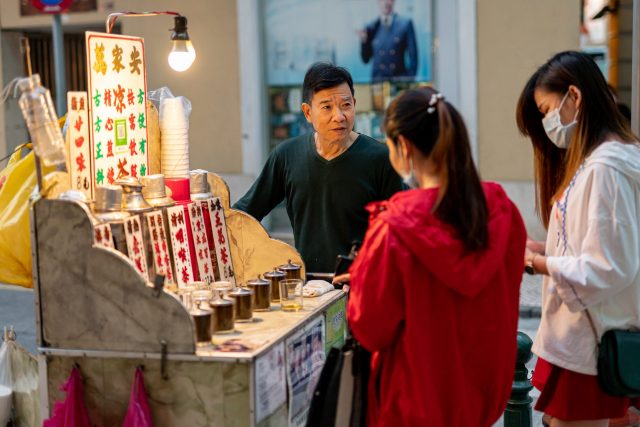 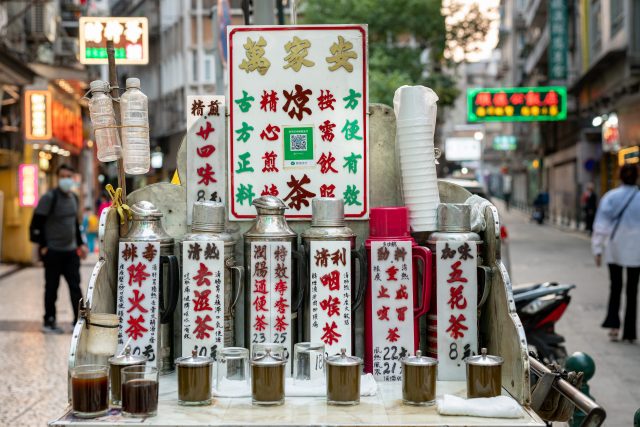 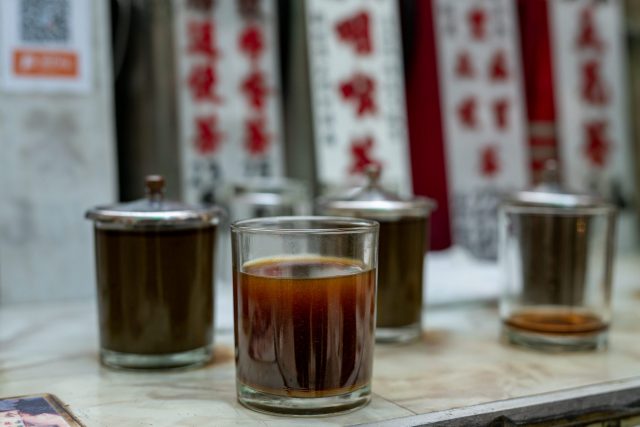 Depending on customers needs, Wong Ping will have a herbal tea to recommend 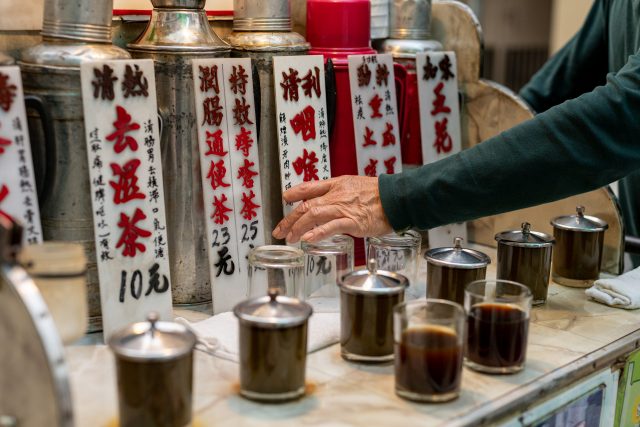 Choosing the right tea for your unique system and specific ailments is important, says Wong Ping

Just before evening sets in, Wong Ping prepares his stall, Man Ka On (萬家安涼茶) along Avenida de Almeida Ribeiro for a rush of afterwork customers. A sweet flowery aroma wafts through the air as he fixes a lightbulb hanging above six glasses filled with various herbal teas on display.

Having established his stall in 1985, Wong has been brewing herbal tea for health-conscious Macao residents for over 35 years. He learned Traditional Chinese Medicine (TCM) in his hometown of Shunde, in mainland China’s Guangdong province, and his wealth of knowledge has made him something of a local expert in herbal tea.

Since setting up shop nearly four decades ago, Wong has watched the area change yet each street remains very “distinctive”. Wong chose the Ruins of St Paul’s neighbourhood, near Rua da Felicidade, for his stall because of its convenience and popularity – he sees lots of foot traffic every day, which is good for business.

“Because the customers have casinos or night shift work, their tempers can flare and they might have dry mouth, a bitter [or bad] taste, or suffer from poor quality of sleep,” he says. “Herbal tea can help in this case.” He even served Hong Kong star Simon Yam Tat Wah herbal tea once, and a film crew borrowed his stall for filming.

The medical theories behind herbal tea can be traced to the Western Jin dynasty (266-316 CE), nearly 2,000 years ago. In 1723, Lin Zhihan – a famous Qing dynasty pharmacist – published a regional study on febrile illnesses in the form of eight-volume collection, Essentials for Four Diagnoses (Sizhen Jue Wei), which then became the guide for TCM diagnoses across China.

While it’s difficult to pinpoint exactly when herbal tea shops first appeared in Macao, one of the first was Tai Sing Kung Cha Medicinal (大聲公) that opened near the Ruins of St Paul’s in the Qing dynasty more than 200 years ago. 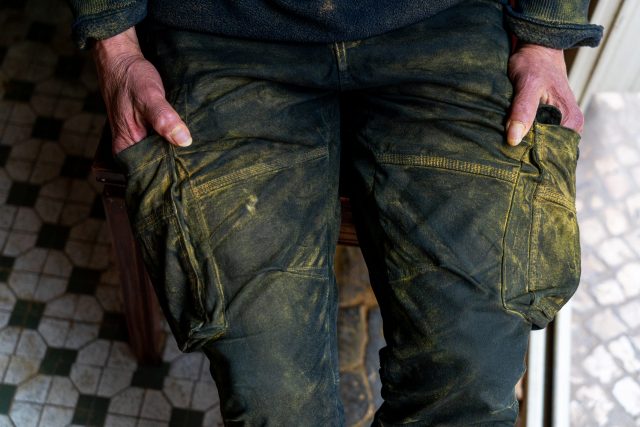 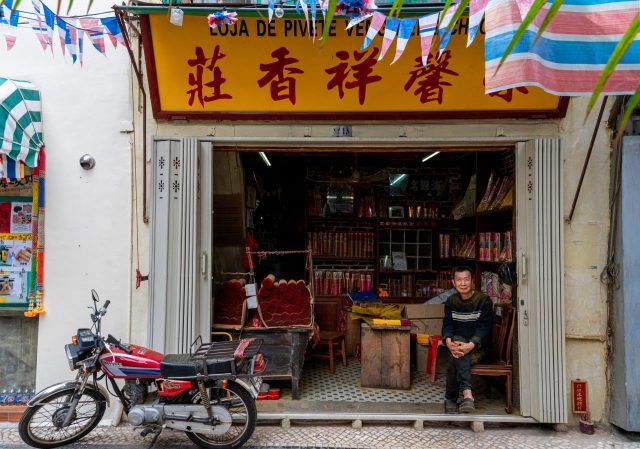 Tam Kin Hong outside his shop on Rua dos Ervanários 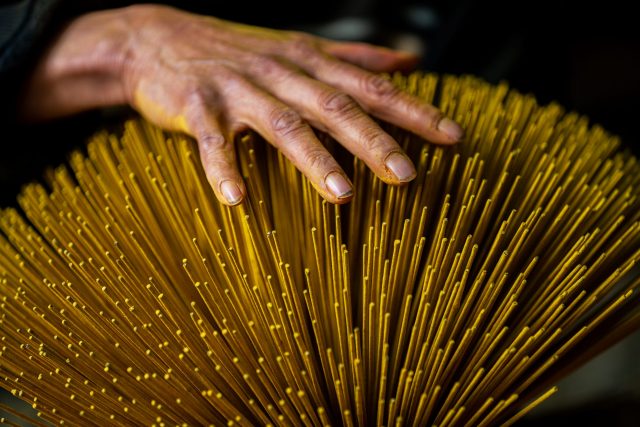 Incense sticks fanned out at the store Products on display at the Veng Heng Cheong Joss-stick Shop 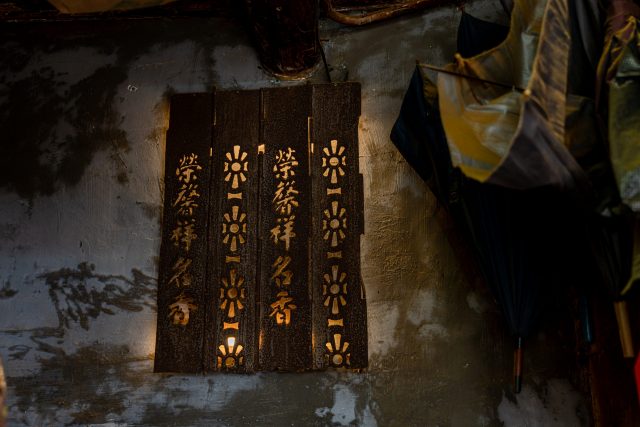 The original shutters of the store preserved post-renovation

Jam-packed with pink, red and yellow incense sticks, the store feels like a relic of the past. Tam explains the message behind the name: “My father is Tam Veng, so the name is taken from his ‘Veng’. ‘Heng’ means fragrance and ‘Cheong’ means auspicious.”

Tam’s family founded the shop in 1968, choosing the prosperous Ruins of St Paul’s neighbourhood because it’s in the heart of the city with plenty of passersby. The store is also close to a few temples – the Na Tcha Temple behind the ruins and the Hong Kung Temple on Rua de Cinco de Outubro – making it convenient for customers to purchase joss sticks before worship.

Tam learned the trade from his parents when he was in middle school. “I started learning how to make incense by going with my mother to the factory.” Since then, he’d spend all of his school breaks learning the trade. He later enhanced his techniques by apprenticing with a master incense maker at the age of 17.

Crafting incense sticks, which are usually made from sandalwood or agarwood, by hand is more complicated than one might imagine. In fact, there are three distinct methods. The first, called ‘Cuoxiang’ (搓香), requires the artisan to knead a mixture of sawdust, spices and incense powder onto bamboo sticks until they’re fully coated.

The second, ‘Linxiang’ (淋香), sees craftsmen dip a bundle of bamboo sticks into water, then into a mixture of incense powder three times before being left to dry. And the third uses machinery – the most recent development in the trade. “While there are three ways to make incense, I learned to craft two kinds: Cuoxiang and Linxiang. In our store, our incense sticks are Cuoxiang-made [by artisans in mainland China].”

Widely in use since China’s Neolithic period, incense stick manufacturing grew more popular from the Xia dynasty (2070-1600 BCE) onward, reaching greater heights during the Song dynasty (960–1279 CE). In Macao, the industry thrived during the 20th and 21st centuries, with 17 factories known to have existed by 1910.

From the 1950s to the 1970s, joss sticks manufacturing was one of  Macao’s three main industries – right behind matchsticks and firecrackers. At the industry’s height, there were more than 40 incense factories. But when the mainland Chinese market opened up in the late 1970s and ‘80s, many competitors emerged and Macao’s joss-stick trade rapidly declined.

Veng Heng Cheong is one of a handful of remaining joss stick shops in Macao and Tam, who’s nearly 70 years old, does not know what the future holds for the trade. With little interest from the younger generation, there is no other choice but to close shop when the time comes. “If I am no longer in good health, I will have to stop doing this,” he says. 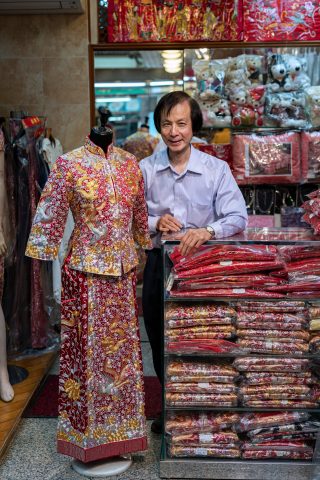 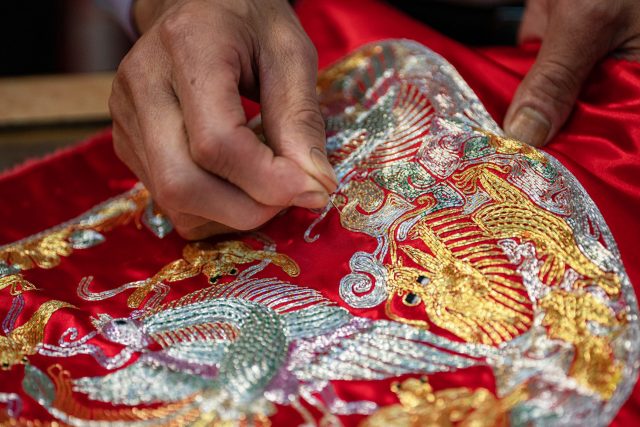 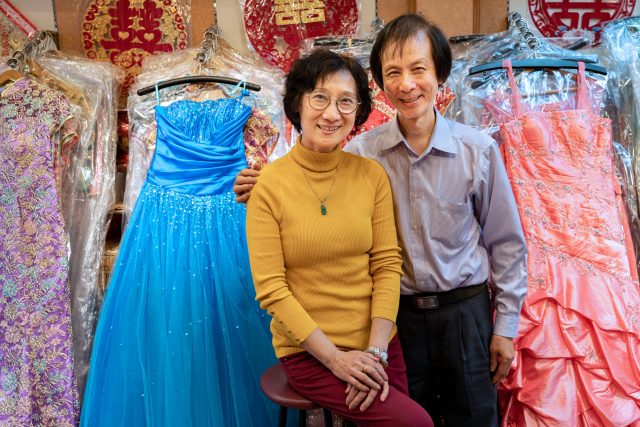 Wong Weng Sou and Wu Lai Heng at their store 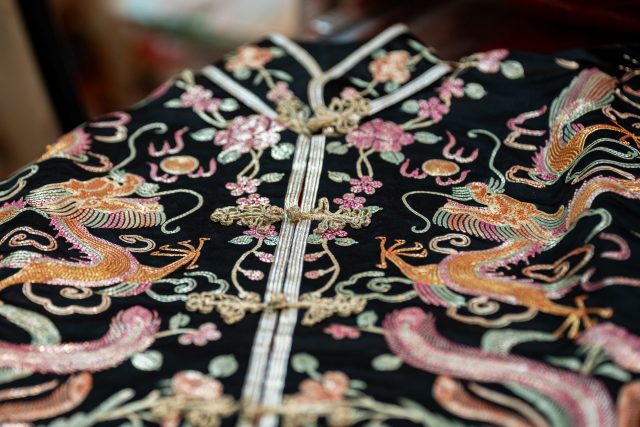 Close-up of the front of a 'kwan kwa' 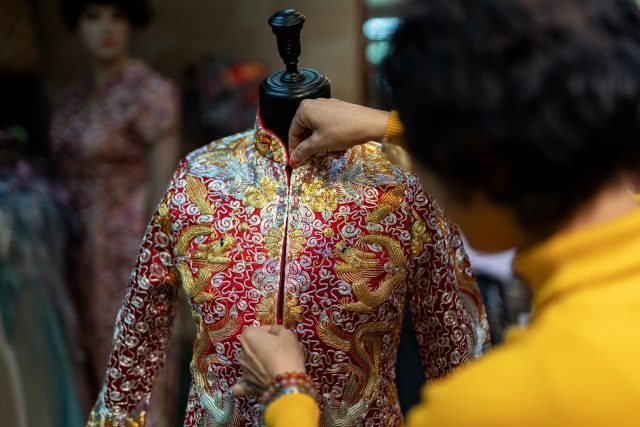 One of the dresses at Choi Sang Long Embroidery

Just around the corner from Veng Heng Cheong Joss-stick Shop, along Rua dos Mercadores, stands Choi Sang Long Embroidery (彩生隆嫁娶用品專門店). With more than 100 years of history, this is one of the few remaining traditional Chinese tailors in Macao that still crafts traditional Chinese wedding dresses (known locally as ‘kwan kwa’) by hand.

The store’s third-generation owner Wong Weng Sou says he can’t remember exactly when the store opened, but pulls out a laminated invoice dating all the way back to 1913 – a year after the founding of the Republic of China.

“I only know that it has been more than a hundred years because this shop was opened during my grandfather’s generation,” he says, adding that his grandfather was only the master dyer and took ownership of the store 80 years ago.

“Choi means different colours; Sang, business; and Long, prosperity,” he continues, explaining the store’s name. “Together, it is Choi Sang Long, which means that the ‘business of different colours of fabrics is prosperous.’”

From outside, the shop’s display of embroidered red kwan kwa captures the attention of brides-to-be. Inside, you can sift through reams and reams of fabric, all protected by special coverings.

In his grandfather’s time, the store was a dyehouse. Then in the 1970s, the family changed directions and became a bridal store selling both Western-style formal wear and traditional Chinese dresses.

The traditional bridal ensemble features two pieces – a long skirt known as the ‘kwan’ and an upper gown called the ‘kwa’ with buttons down the front – with the handmade, intricate embroidery that takes several months to create. First, tailors measure the client, then cut the fabric, draw patterns, build the structure, refine, and finally hand-stitch the embroidery.

The embroidered designs tend to take on symbolic patterns, such as a flying dragon sewn with glistening golden thread alongside a gold or silver phoenix, which together signify ‘eternal love’. Often, the skilled tailors also weave clouds, flowers and other patterns into the designs –  each with its own meaning. “For example, the flowers represent the blossoming of wealth and honour,” he says.

“In the past, we also made beaded gowns and skirts,” Wong continues. “Nowadays, customers don’t like to use beads. Most of our customers prefer gold and silver thread. In the past two decades, they’ve also asked for three-dimensional designs, enhancing the quality of the dress.”

Usually worn during the traditional tea ceremony – an important part of Chinese weddings spent with senior family members – the entire dress can cost MOP 25,000 or more. Naturally, the more elaborate the embroidery, the more expensive a dress will be. If rented, however, a kwan kwa can cost a tenth of the price.

One of the only few stores left in the city doing traditional Chinese wedding dress embroidery, Choi Sang Long’s clientele includes many locals and even orders from abroad. The couple is proud to preserve the artform in Macao, adding that their location near a cakeshop and a Che Lee Yuen (謝利源) – a local gold and jewellery store – is a boon for business. “[We] create such beautiful clothes for brides,” says Wu. “Everyone is happy when they have an unforgettable wedding.”