Storms, floods and deaths on the rise as climate fallout takes shape in Asia Link copied

It’s no coincidence that we're seeing climate change. Not only do natural disasters cost lives, but they also destroy habitats and increase the risk of future pandemics. 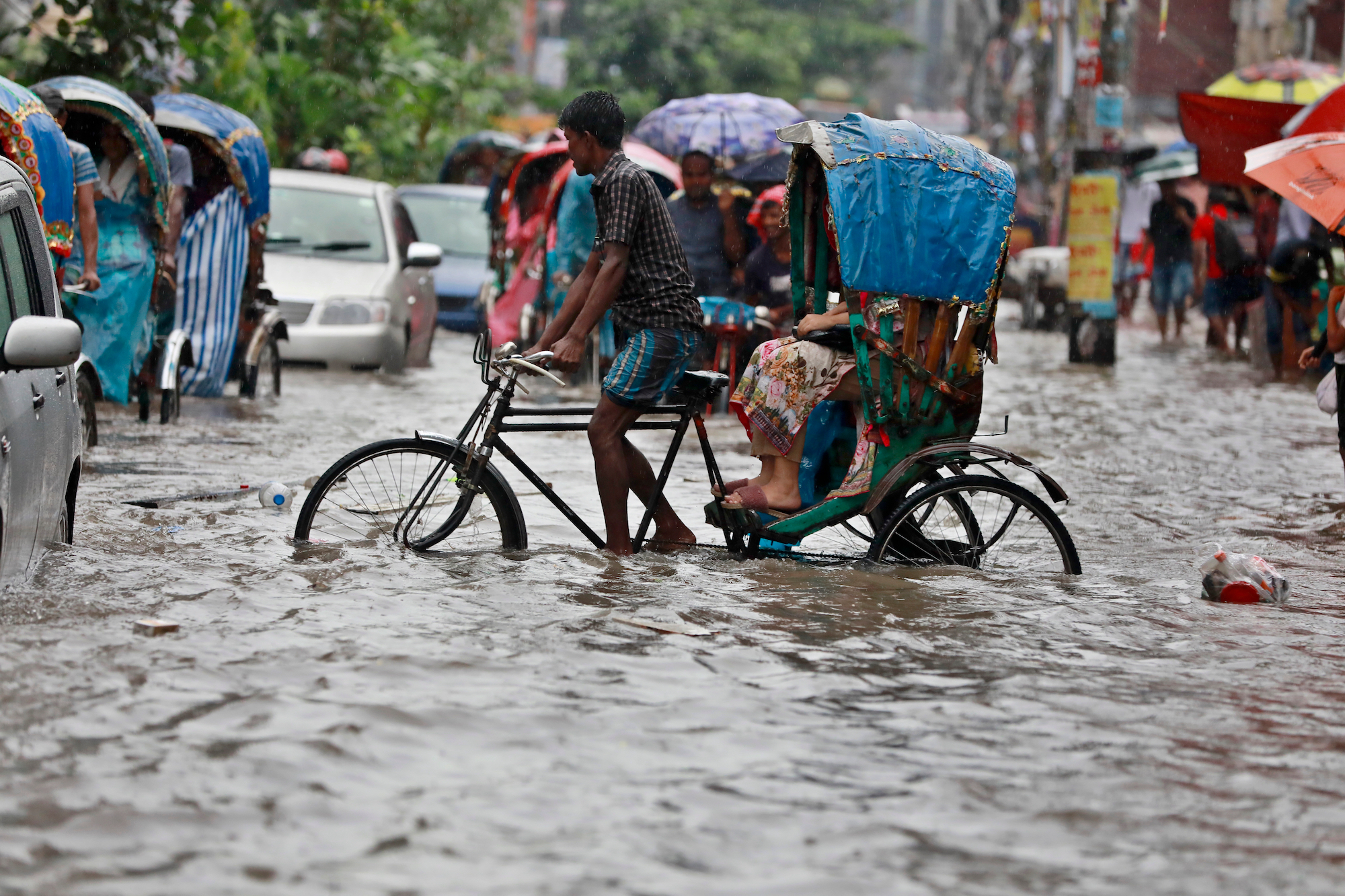 Photo by Sk Hasan Ali
In partnership with

On 20 December 2021, the Macao government raised a Tropical Cyclone Signal No.1 as Super Typhoon Rai (also known as Rey or Odette) roared across the South China Sea. The move marked the second instance in recorded history that the city raised a warning so late in the year. The last time it happened was 46 years ago when Super Typhoon Emma battered Japan and South Korea with 230-kilometre-per-hour winds before veering toward Hong Kong and Macao.

In December, Typhoon Rai petered out before it made landfall in Macao but not before ravaging the Philippines, where the storm killed more than 400 people, injured over 1,000 and caused at least MOP 6.376 million (US$794 million) in damages. It is normal for the Philippines to experience several typhoons every year, but most occur during the typhoon season from June to September. In addition, few typhoons in the country’s history have swelled as rapidly, leaving residents with little time to prepare or evacuate.

Last year’s rare December storm was just one of many grave “milestones” on the climate front in 2021. Globally, the concentration of carbon dioxide in the atmosphere hit a dangerous new peak in May, while July became the hottest month on record.

Macao alone broke eight records when it comes to extreme weather last year. For example, the city recorded the highest number of “extremely” hot days (over 33°C) and the most rainfall in a single day since 1952.

This is no coincidence: research shows that climate change has increased the frequency and severity of extreme weather. Essentially, as the sea surface temperature increases, the additional energy leads to stronger and larger winds and higher rainfall, while rising sea levels make storm surges even more likely.

In regards to tropical typhoons specifically, studies show that the proportion of “severe storms” (equivalent to Signal Nos. 8-10  in Macao) has grown by 5 per cent every decade since 1979. And if global warming surpasses 2°C, scientists warn that tropical typhoons could intensify by a further 5 per cent while associated rainfall jumps by 14 per cent.

Macao has warmed at an average rate of about 0.09°C per decade between 1952 and 2020. In parallel, three out of seven Signal No. 10 typhoons issued since 1968 occurred in the past five years.

Climate change not only alters our weather patterns, but also has serious implications for the economy, public health, food security, infectious diseases and habitats. If nothing changes in coming years, we can expect:

The 10 costliest weather disasters of 2021 exceeded approximately MOP 1 trillion (US$124.7 billion) globally in total, according to a study by Christian Aid. What’s more, data from the World Meteorological Organization shows that environment-related hazards caused almost half of the total disasters worldwide recorded between 1970 and 2019, resulting in over 2 million deaths and approximately MOP 29 trillion (US$3.6 trillion) in losses.

In the aftermath of Super Typhoon Hato, for example, Macao suffered a total of MOP 12.57 billion (​​US$1.6 billion) in economic losses. That’s just one natural disaster in one city – if climate change goes unchecked, scientists and economists expect the global economic output to plummet approximately MOP 184 trillion (US$22.9 trillion) by 2050.

As surface and ocean temperatures rise, so too does the risk of infectious disease outbreaks. Global warming has caused many species to migrate in search of food, habitat or more suitable temperatures, which means species that have never been in contact before may now intersect and transfer pathogens.

Similarly, deforestation and encroachment on animal habitats can lead to virus and bacteria transmission from wild animals to humans. For example, the World Health Organization warns that people living at higher altitudes, such as Nepal, will be at greater risk of malaria as climate change continues.

Malaria, which is a vector-borne disease, develops faster at higher temperatures and longer, heavier monsoons will provide ideal breeding grounds for mosquitoes, which carry the malaria parasite. The issue will not just affect the Himalayas: around the globe, scientists estimate that climate change will cause 5 per cent of malaria cases (or 21 million cases) by 2030.

The increased risk of disease transmission will impact plants, too. As the Earth warms, crops are becoming more vulnerable to attacks by pests and pathogens. Over time, this could make it more difficult to produce enough edible crops to feed the world’s rapidly growing population.

Besides warmer temperatures, changes in rainfall and extreme weather events also pose risks to food production, quality and distribution, threatening our collective access to food. In the context of Covid-19, extreme weather events around the world led to a 10-year high in global food prices in 2021. Meanwhile, in China, prices for fresh vegetables rose by 30 per cent in 2021 compared to the year prior, due to severe flooding.

The global mean sea level rose by 20 centimetres over the past century. That may not sound like much, but it could have catastrophic consequences. Sea level rise causes coastal erosion, contaminates soil, destroys animal habitats and damages underlying urban infrastructure. If the trend continues, sea level rise could render many coastal areas uninhabitable for humans.

Super Typhoon Rai shows just how devastating sea level rise can be. The deadly storm damaged 1.5 million homes and displaced 144,000 people. If humans continue to cause greenhouse gases at the current pace, the global mean sea level will likely rise 0.6–1.0 metres by 2100. Here in Macao, the sea level is expected to rise by half a metre by the middle of the century.

It’s an inconvenient truth, but all aspects of our lives are inseparable from climate change, from our health to economy, food and homes. When the climate is altered, our lives will be too.

We must restore the balance of the climate system. Since the 1980s, scientists have been educating the public about climate change and its potential impacts, while establishing international frameworks and agreements to enable collective action.

However, we are not making anywhere near enough progress. In 2015, world leaders agreed to keep global warming under 1.5°C compared with pre-industrial levels by passing the Paris Agreement. Six years later, the world is on track to warm by 2.7°C by the end of the century.

The good news is that every individual can make a difference and help keep greenhouse gas emissions from escalating. No matter your age or job, you can take action for climate change and our home. Here’s how to help:

1. Live greener. From carrying a reusable water bottle to adopting a plant-based diet, there are many ways that you can embrace a more eco-friendly, low-carbon lifestyle. The key is to create sustainable habits that you can continue for the long-term.

2. Talk about it. Most people have heard of climate change, but surprisingly few accept that it’s caused by humans and we have the power to stop it. Research shows that people are more likely to accept climate change facts when the message comes from someone in their social circle. So discussing climate change with friends and family and encouraging them to learn more is a great place to start!

3. Volunteer for the planet. Join a beach clean-up in your local area, volunteer at a recycling station, help a local environmental organisation and invite others to pitch in, too.  When more people take part in environmental activities, the movement will grow faster and receive more support – both from the private and public sector.