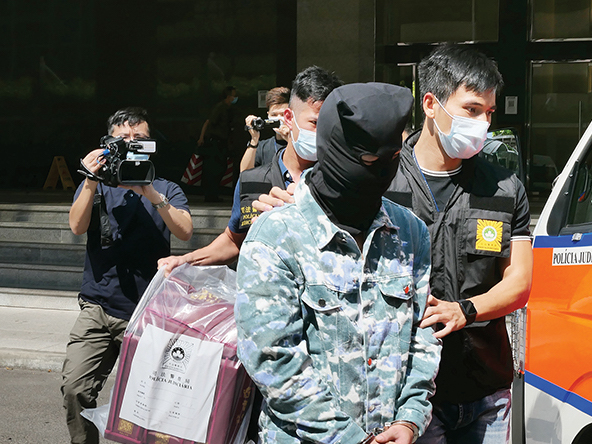 A local man was arrested on Tuesday for embezzling his friend’s seven bottles of luxury Scotch whisky worth HK$134,000 (MOP 138,000) and reselling them for MOP 100,000, Judiciary Police (PJ) spokesman Lai Chio Hong said at a special press conference on Wednesday.

The 32-year-old suspect surnamed Kuok told the police that he works as a banquet supervisor in a hotel. Kuok and the victim have been friends for four years.

According to Lai, the victim and Kuok reported the case to the police together on August 14, saying they had been defrauded by a parallel trader allegedly hired by Kuok to smuggle seven bottles of whisky to the victim’s friend in the mainland, resulting in a loss of about MOP 140,000.

The victim told the police that he assisted his friend in the mainland to buy seven bottles of whisky in Macao on August 10 – six bottles worth HK$16,000 each and one bottle worth HK$38,000, costing HK$134,000 in total. Kuok told the victim that he could hire a parallel trader to smuggle the liquor into the mainland for MOP 300 per bottle.

Kuok stated that the victim then handed over the seven bottles to a shop in a mall near the Barrier Gate. Afterwards, the victim received no news from Kuok and contacted him on 13 August. Kuok told the victim that he had given the bottles to a parallel trader surnamed Lei but Kuok later discovered that Lei did not go to the mainland, and he was unable to contact Lei. The victim told the police that Kuok showed him a copy of what he told him was Lei’s Macao ID card. Both told the police they suspected that Lei stole the bottles, Lai said.

The victim’s name was not released by the police.

According to Lai, PJ officers had doubts about the case as presented to them by Kuok and the victim. After scrutinising CCTV footage and double-checking the information provided by Kuok, PJ officers discovered that what Kuok had told them was completely inconsistent with the CCTV footage. PJ officers discovered that the person who carried the seven bottles was not the “parallel trader” surnamed Lei, but the owner of a liquor store in the northern district.

PJ officers later confirmed that Kuok had falsely told the owner of the liquor store that he had gambled away all his money and urgently needed cash, and therefore decided to resell the seven bottles for MOP 100,000 in cash. PJ officers later recovered the loot from the store, Lai said.

According to Lai, Kuok was arrested on Tuesday at the Barrier Gate checkpoint when he was about to leave Macao. He admitted to committing the crime and told the police that he had used the copy of a fake Macao ID card photo which he found in a chat group. He also admitted that he cheated his friend by telling him that Lei was the parallel trader who assisted him in smuggling the bottles to the victim’s friend in the mainland. Kuok told the police that he used the MOP 100,000 to repay his debts.

Kuok was transferred to the Public Prosecutions Office (MP) on Wednesday, facing a fraud charge, according to Lai.