Two men were arrested on Tuesday for stealing and fencing goods worth more than MOP 350,000. 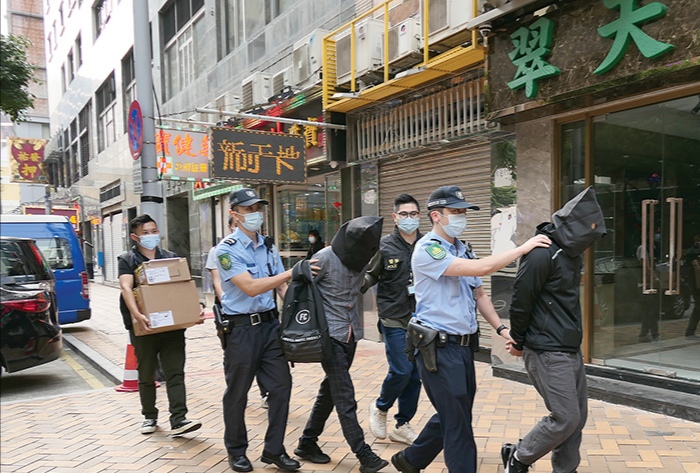 Two mainlanders were arrested on Tuesday for stealing and fencing goods worth more than MOP 350,000 (US$43,900), Public Security Police (PSP) spokesman Cheong Heon Fan said at a special press conference on Wednesday.

According to Cheong, PSP officers were informed by a hotel contact on Tuesday night that a man acting suspiciously was moving goods near the footbridge in Estrada do Istmo in Cotai.

PSP officers continued their investigation based on the information provided by Liu and went to Shi’s home in Areia Preta district. They arrested Shi at his home and seized 25 goods.

Under questioning, Shi admitted that since April, he had stolen a number of goods from a section in the shop not covered by its CCTV surveillance cameras and resold them to Liu at a 40 per cent discount of the original price for profit. He claimed that he could not remember the prices of the goods stolen since April. However, he acknowledged that he stole goods worth about MOP 350,000 in October.

PSP officers also discovered that MOP 200,000 had been deposited into Shi’s bank account in October. Shi admitted that the deposits into his account came from the resale of stolen goods. Cheong said after buying the stolen goods from Shi, Liu resold them online. Liu kept the goods at a consignment store (格仔店) near the Barrier Gate checkpoint and arranged for buyers to pick up the goods there in order to avoid being traced.

According to Cheong, PSP officers seized a total of 108 stolen goods, 24 at the scene where Liu was arrested, 25 at Shi’s home and 59 at the consignment store. The total commercial value was still being calculated at the time of Wednesday’s press conference. After checking the records, PSP officers discovered that Shi once reported a shoplifting case to the police on behalf of the shop’s management in June. The shop’s financial loss from purported shoplifting since April is still being assessed by the management, Cheong said.

The duo were transferred to the Public Prosecutions Office (MP) on Wednesday for follow-up investigation, facing aggravated theft and fencing charges.