The New Macau Gaming Workers' Rights Union organised a protest march on Monday, urging the government to push the city’s six gaming operators to raise their workers’ wages by at least five per cent. 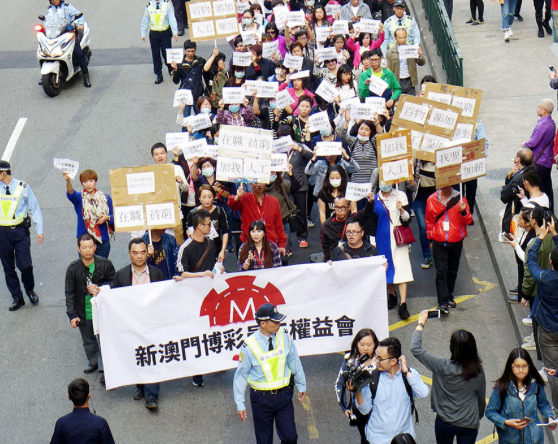 The New Macau Gaming Workers’ Rights Union organised a protest march on Monday, urging the government to push the city’s six gaming operators to raise their workers’ wages by at least five per cent.

According to Cloee Chao Sao Fong, the union’s high-profile leader, the protest rally also aimed to urge the government to reduce the number of non-resident workers and submit a trade union bill to the legislature.

Speaking to reporters before the protest, Chao said that except Sands China, the other five gaming operators had not increased their workers’ wages last year.

“Employees who are working in other departments of casinos, such as security and housekeeping, only earn about 10,000 patacas per month,” Chao said. “Outsiders may think that people working in casinos earn a lot. But they are wrong.”

After handing a petition to an official outside Government Headquarters, Chao said about 300 people had joined the protest.

According to the Public Security Police (PSP), the protest drew about 200 demonstrators, while 30 police officers were deployed to maintain order.

In response to a reporter’s question of what if any further actions the association would take if the city’s six rival gaming operators failed to increase their staff salaries after the protest, Chao said her association was planning to ask some lawmakers to raise the matter in the legislature.

Chao added her association was also planning to collect signatures from gaming workers and hold protests outside local casinos, if the operators did not respond to her union’s demand before Chinese New Year.

Lei Man Chao, the union’s vice-president, said he did not rule out the possibility of calling a walkout in the gaming industry. However, he was quick to add that “it depends on the situation”.

Lei said: “I hope the gaming operators will be more appreciative. After earning money in Macau, don’t simply take it away [without benefitting locals].”