A Chinese character on banknotes issued by the Bank of China, Macau Branch has raised concerns about the notes being printed differently from that outlined in the Basic Law. 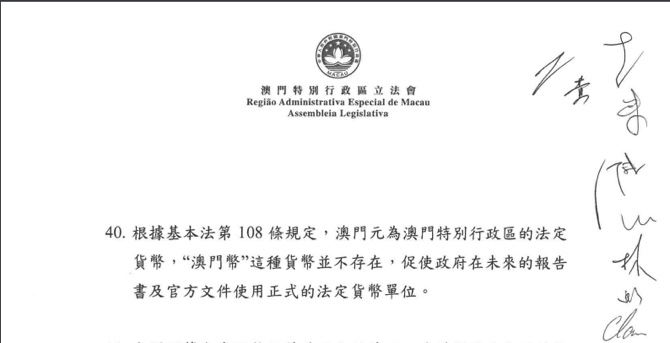 A Chinese character on banknotes issued by the Bank of China, Macau Branch has raised concerns about the notes being printed differently from that outlined in the Basic Law, cited minutes of a Legislative Assembly Committee meeting,  according to Macau Daily Times today.

The Committee Following-up Public Finance Affairs issued the minutes on August 5. The minutes detailed the discussion on budget execution in 2018 by the Executive branch.

Item 40 of the minutes was highlighted by social media users speculating that the issue may invalidate the money as legal tender. The item stresses that the legal tender in Macau, pursuant to the Basic Law, is 걜門禱 (Ou Mun Yuen). In the item, the committee urged the government to adopt the correct term in the future.

The local newspaper writte that “This has given rise to concerns about the legal tender printed by the Bank of China, Macau Branch, as a different term is used on the notes. The term the bank uses is 걜門幣 (Ou Mun Pai), and it is printed on all the banknotes the bank issues.”

Legally, pursuant to Article 4 of the Decree-law No. 7/95/M, the legal tender in Macau is called the Macau pataca in Portuguese, and designated as MOP in the ISO 4217 list of international currency codes. According to the legislation, the official name in Chinese is Ou Mun Pai, as pronounced in Cantonese, which literally means “Macau currency” in English.

As a constitutional document, the Basic Law is the foundation of the Macau legal system. Any law that contradicts the Basic Law requires revision or nullification.

The Monetary Authority of Macao, in response to Macau Daily Times’ inquiry on the matter, cited the provisions in both laws, adding that Law No. 1/1999 did not expressly discuss the different terms for the currency.

In response, they explained that, in the Monetary Authority’s understanding, both Ou Mun Yuen and Ou Mun Pai are different only in name. The Authority does not see any difference in their nature.

Technically, the Authority remarked, the Chinese character 幣 (Pai) is used for general references to currency or money.

According to Macau Daily Times the local  lawyer Vítor Tang holds a similar view. “Considering the issue to be a potential breach of the Basic Law may be a bit of an exaggeration,” the lawyer said.

The Basic Law provision may have been there to ensure the smooth transition of power between two sovereign states, Tang postulated.

“The exact wording of the Article is ‘The Macao Pataca, as the legal tender in the Macao Special Administrative Region, shall continue to circulate,’ which I believe focused more on the continuation of the currency, instead of what it should be called,” Tang said.

“At that time, ensuring no fluctuation occurred in the financial market was prominent,” the lawyer added.

The lawyer also cited other laws that refer to the currency as Ou Mun Pai as examples of the widespread use of the term.

The same thing occurred in Hong Kong. The Hong Kong Basic Law uses Heung Kong Yuen, not Heung Kong Pai, to refer to the currency. However, “Kong Pai” (an abbreviation for Hong Kong Dollar in Chinese) is printed on the paper money.

Considering the issue from another perspective, Tang thinks this problem may have been caused by something being “lost in translation.” A mere word choice may be the root of the issue.

It is worth pointing out that when Macau was under Portuguese administration, written Chinese was not even an official language of Macau until 1991.

Before 1999, when all laws were written in Portuguese, the currency would only be referred to as “pataca.” The Chinese name may have become ambiguous, as both Pai and Yuen mean money.

Nonetheless, Tang pointed out that some laws were written in both languages even before 1999. In these laws, Ou Mun Pai was used to refer to the currency.

The lawyer pointed out that the 20th anniversary commemorative banknote used Ou Mun Yuen. An Executive Decree was issued in March, far earlier than the minutes of the Legislative Committee.

Prior to the actual issuing of paper money, the design and other specifications were to be determined by an Executive Decree. In the Executive Decree, the currency is referred to in Chinese as Ou Mun Pai, not Ou Mun Yuen.

“I don’t think the matter can be raised up to the level of violating the Basic Law,” Tang reiterated.

The legal tender of Macau is not issued by its de-facto central bank, the Monetary Authority of Macao. It is issued, under the authority’s commission, by two commercial banks: the Bank of China and Banco Nacional Ultramarino. The latter has never explicitly used either of the full Chinese terms on their banknotes.

The Bank of China was also contacted for comment, but no response was received by press time.