Macao residents living overseas share their concerns, frustrations and hopes as the city battles its biggest Covid-19 outbreak to date. 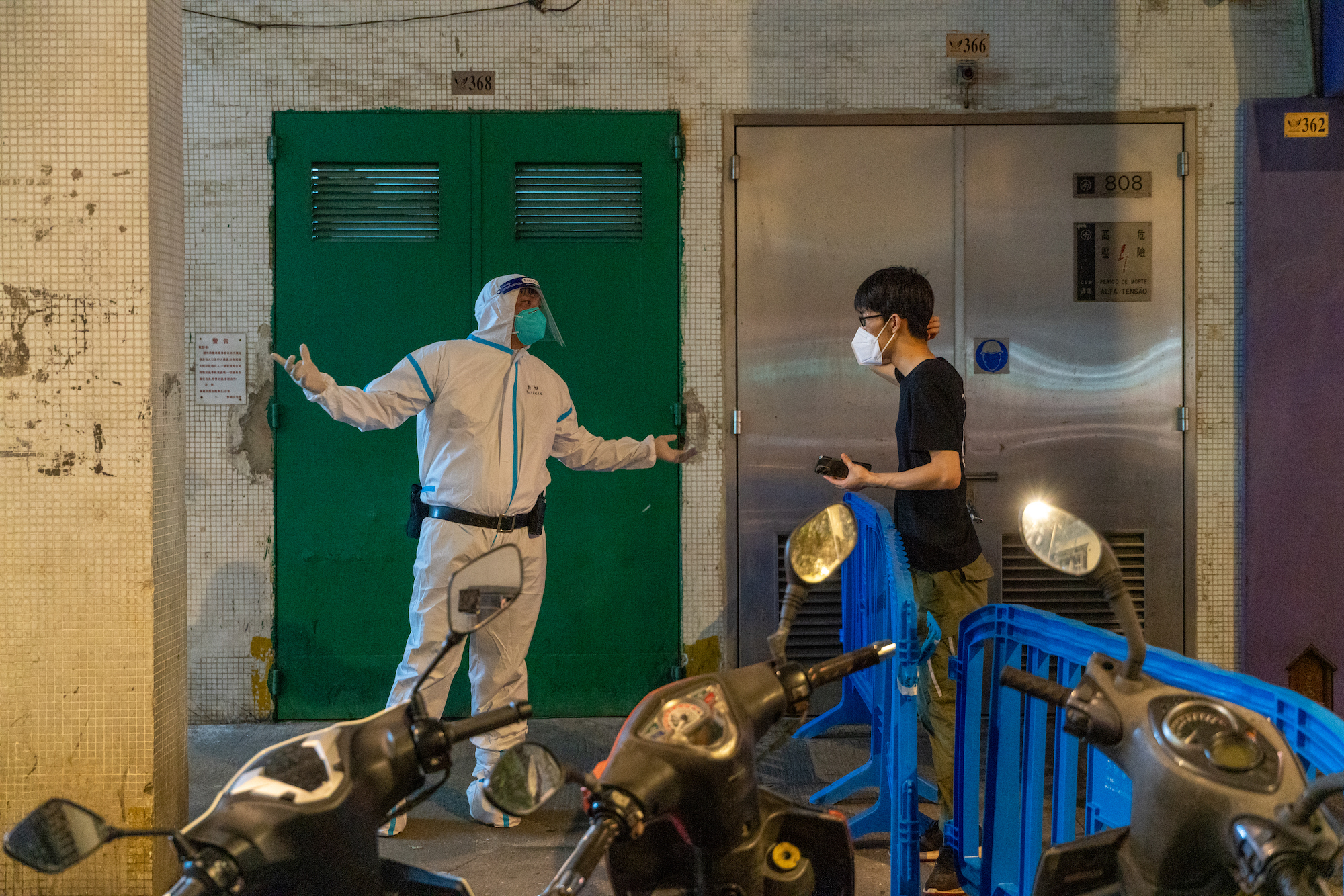 Since Macao’s current – and so far worst – Covid-19 outbreak began on 18 June, many people who once lived in the city have been following the news, some with bated breath, and some with exasperation.

We spoke to five Macao residents based overseas to get their take on the city’s management of the crisis, as well as their hopes and fears for the future.

Johannesburg-born Alexandre Torrão came to Macao with his parents in 1997. He studied at the Macau Portuguese School (EPM) and Dom Bosco and, though he returned to South Africa in 2011 to open his business – Eighty8s Food Co. catering, food trucks and restaurants, as well as a noodle bar called @Noodsjoint – he still has many friends and some family members in this city, including his parents.

“I have not seen my friends and family, and my children have not seen their grandparents for more than two years. I’m worried about Macao, [about] my parents and some family members who live in Macao,” he says.

“I think the Macao government has poorly managed the entire situation. From the exaggerated lockdowns to the numerous tests done on citizens, as well as focusing on certain communities such as deeming all Filipinos in Macao high-risk,” says Torrao, who is “not confident” about Macao’s short-term or long-term outlook.

“Giving money [to residents] every few months is not the way. People don’t just want money. People want freedom … to travel and move freely,” he insists.

Torrão is also worried that Macao’s strict Covid-19 measures – including banning foreign tourists from entering the city – will affect the health of the city’s economy.

“Businesses have been affected, skilled migrants and workers have been affected. The fact that Macao has single-handedly killed its breadwinning industries [gaming and tourism] is not surprising at all,” he says. “For me, the measures [the government has] taken are draconian and have been reactive rather than calculated [measures] that make sense [for] the community and are in line with the WHO.

“I hope Macao can overcome this situation.”

Born in Indonesia in 1961 to an ethnic Chinese father and Indonesian-Dutch mother, Nancy Julia Yip was only three years old when her parents took her and four older siblings to Macao, where she was raised and would eventually raise her own family. In 1998, Yip, her husband and their three children migrated to Sydney in Australia.

Even though she has been away for many years, Yip still feels a strong attachment to Macao. “I grew up and lived there for nearly 35 years before moving overseas, so Macao will always be my home,” she says.

Prior to the pandemic, she and her Mozambique-born husband – whose many relatives are also still based in Macao – continued to visit the city every year or two, but they haven’t been able to visit since 2019.

“We have been following the news about Macao’s [Covid-19] situation on Facebook. I think the government is doing their best to handle the situation and I hope everything will be under control,” says the 60-year-old, although she admits that she and her husband are still concerned about their loved ones.

“I have my oldest sister and mother-in-law there, and my nephews and nieces and other relatives and friends,” she points out.

“I’m worried about my family there and I miss them so much. I’m just feeling a bit emotional. We really miss you all in Macao,” she says with a slight crack in her voice.

“We can’t do anything but pray for the best. We love you all there.”

Cathy Lai left Macao for Switzerland in February 2020, before the pandemic interrupted international travel. Since then, she hasn’t been back or seen her parents, younger brother, and sister-in-law, all of whom remain in Macao, in person. That isn’t her only concern.

“My parents [both in their 60s] are not young, so Covid-19 might be more dangerous to them than to us [younger people]. That’s for sure one of my worries,” says the 36-year-old content creator and environmental journalist from her home base in Zürich.

“But to be honest, I’m more worried about the economic impact of the current Covid-19 measures and how they affect people’s livelihood.”

Many people she knows in Macao, both friends and family, have been forced to take unpaid leave since the pandemic began. “Some of my friends even say, ‘I’m lucky that I could keep my job’, which is something you seldom heard before the pandemic,” Lai says.

And now, with the current outbreak and some of its “extreme measures” like “instructing people in Macao to do so many rounds” of nucleic acid testing (NAT), Lai cannot help but wonder if the measures that she thinks made sense at the beginning of the pandemic still do today.

“At that time, we didn’t know a lot about the virus, so we [were better off being] cautious rather than relaxed,” she says.

“I’m not confident about how the situation is being handled [by the Macao government] because the Covid-19 measures there seem to be hurting society rather than protecting it. Macao is losing its status as a gaming hub; people suffering from other diseases are not getting immediate and necessary medical support; a lot of small businesses [have] shut down due to the bad economy and the entire population is under a lot of stress.”

Ricky Asuncion came to Macao with his parents about 30 years ago. In 2018, the 44-year-old owner of well-known Filipino restaurant Sarimanok on Rua da Alfândega decided to relocate to the Philippines with his wife and four younger children, while his oldest daughter and her family stayed in Macao, where Asuncion’s 71-year-old widowed mother also lives.

“We’re worried about my mother, who lives by herself in my place back in Macao. Before the [partial] lockdown, I asked my oldest daughter to buy two weeks’ worth of food and other necessary things for her,” he says.

He is also worried about Sarimanok. Public health measures have taken their toll on the business since the beginning of the pandemic. The outlook has only worsened during the current Covid-19 outbreak.

“We have lost about 70 per cent of our revenues compared to before the pandemic. And with the current outbreak, if situations don’t change, [Sarimanok] may have to close down,” says Asuncion.

Sin Kit I has been living in Medellín, Colombia, for the past 13 years, but many members of her big family still live in Macao, which she last visited in 2019.

“My 71-year-old father is there; my brother and sister-in-law, my cousins, uncles and aunts are there. I still have a lot of friends there. I’ve been following the news about Macao’s Covid-19 situation since the pandemic began and I’m worried about them,” says the 39-year-old public servant.

“First, I’m worried about their mental health when they’re not allowed to go out. I think, if a few people – even in the same family – are confined to the same space, especially if their homes are small, it would affect their mental health,” she adds, referring to Macao’s recent partial lockdown and the city’s locked-down red code zones (the last four buildings were reopened on 28 July).

But what Sin is most worried about is Macao’s economy. “Macao depends on the casinos and tourists visiting the city, and these two sectors are obviously not working [in the current outbreak]. So many people work for the casinos. This affects their jobs and their lives,” she says.

Although she admits to not being up to speed on all of Macao’s Covid-19 measures, Sin does think that her hometown’s zero-Covid policy is “not realistic”.

”It is very hard to have zero cases of any disease, not just Covid-19,” she notes. “It will only end up like a rollercoaster. When the cases are going up, you try to bring the cases down again, knowing that they will go up again.”

Rather than pushing for zero Covid-19 cases, she advocates for a more reasoned approach. “I hope the government and all people in Macao can learn to live with this disease or other diseases that may come in the future and, instead of trying to push for zero cases, try to understand the disease better, and again – not just with Covid-19.”

However, she doesn’t think all Macao’s measures have been misguided. She appreciates that the government has given free Covid-19 necessities to the population, such as facemasks, rapid antigen tests and nucleic acid tests.

“Here [in Colombia], you really have to pay for all those things,” says Sin.

“I miss Macao very much – my family, friends, the food and just walking along the streets there. I hope Macao will be able to cope with the current outbreak and the entire pandemic situation will get better soon.”