Is Macao as deaf-friendly as it could be? Link copied

Macao’s hearing impaired community is well-supported these days, but there’s still work to be done – especially for the city’s hearing-impaired youth, for whom the mask mandate has taken a real toll. 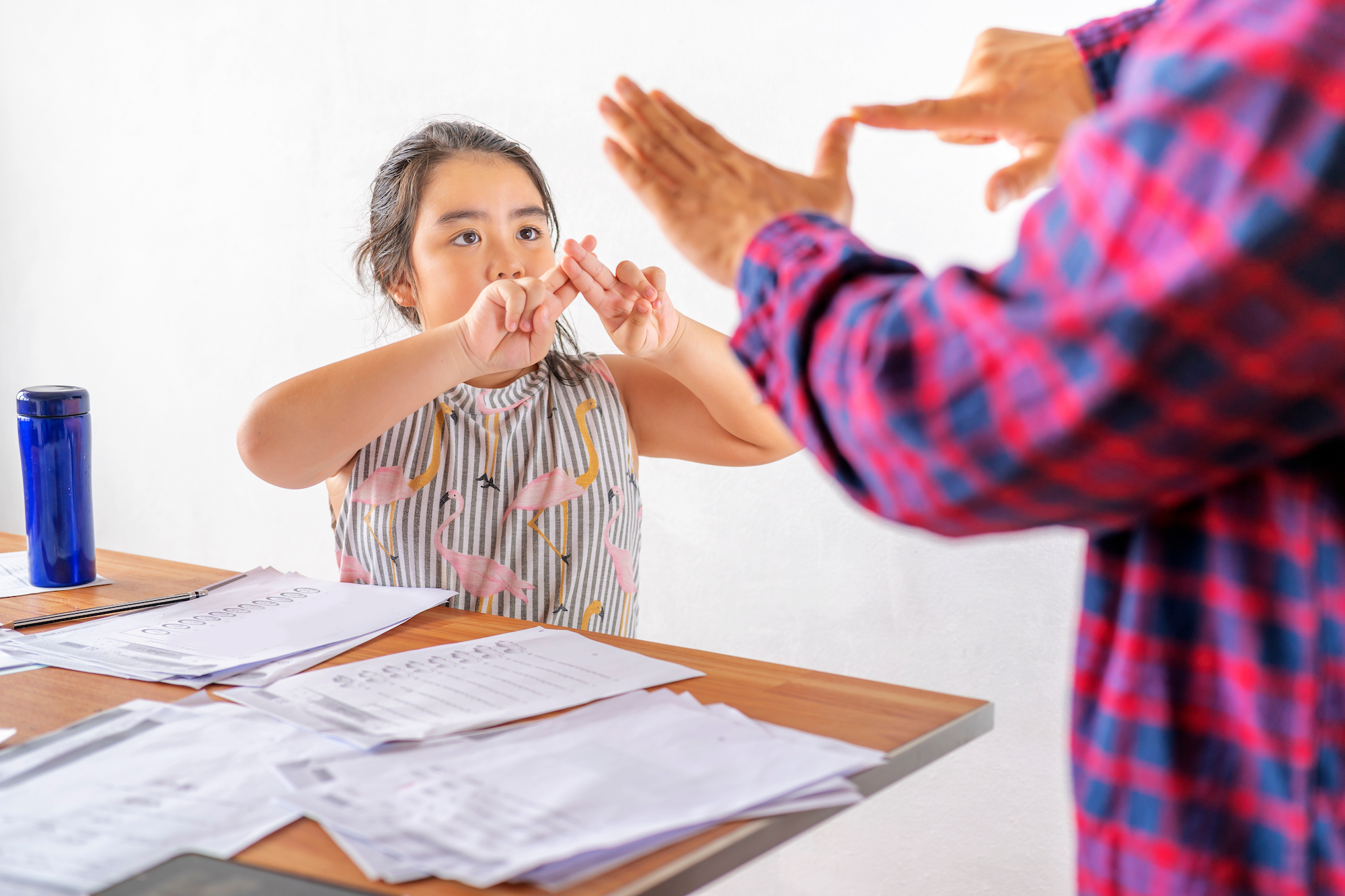 There are more than 90 people under the age of 18 with hearing impairment in Macao, according to the Social Welfare Affairs Bureau (IAS). Two per cent of the city’s hearing-impaired community. At school, they rely on combinations of sign language, hearing aids, facial expressions, lip reading, and loud, clear-speaking voices to understand their teachers and classmates. Widely reported anecdotal evidence suggests wearing masks at school during the Covid-19 pandemic has made learning harder for all students, but its impact on anyone who struggles or cannot hear is indubitably worse.

Director of the Macau Deaf Association (MDA) Nerissa Lau points out that most masks make lip reading impossible and hinder the interpretation of facial expressions. Masks also muffle voices; for students already struggling to hear, this can be the difference between taking in some content and taking in no content.

The MDA provides school admission support services. In addition to strengthening the school’s understanding of hearing-impaired students, the association also explains students’ hearing-impairment status and the difficulties they face in learning to school teachers, while also providing teaching suggestions.

“We recommend that teachers use transparent masks, adjust seats for affected students, provide preview materials before class and learning points after class, as well as increasing use of visuals like PowerPoint, blackboard and pictures,” Lau advises. She also says teachers can use wireless frequency modulation systems so students with moderate hearing impairment can directly listen to a teacher’s voice through their hearing aids.

According to Lau, some of the city’s hearing-impaired students have even stopped studying altogether – and Macao is not alone in this problem. Covid-19 restrictions have had a major impact on students around the world, hearing impaired or not. School drop-out rates have increased by more than 35 per cent in some places over the past three years, according to the Center for Global Development, a US-based think-tank.

“Although there are many difficulties and obstacles for these students during the pandemic, all these problems should not hinder anyone’s learning rights,” she insists.

This is just one issue that Macao’s hearing-impaired community currently faces, though life for the city’s hard-of-hearing has improved immeasurably over the past two decades. The MDA’s president, Wong Kam Sun, says deaf people were largely shunned by society even in the 1990s, and there was no place for them to gather together as a community. “Back then, we used to write things down on paper so people could read what we tried to say,” Wong, who is in his late 30s, remembers. He lost his hearing gradually after suffering from a severe fever as a toddler.

When a South African Catholic missionary named Father Cyril Axelrod established the Macau Deaf Association (MDA) in 1994, it’s few dozen members were all completely deaf. But that only accounted for a fraction of people whose lives were impacted by hearing loss. The IAS estimates there are about 4,700 hearing-impaired people in Macao today, and divides them into four categories: slight (34 per cent of Macao’s hearing impaired), moderate (43 per cent), severe (8 per cent) and very severe (15 per cent). Seventy-three per cent are aged 65 and over.

Over the years, the MDA’s membership has grown to about 700, including people with mild deafness as well as their family and friends. The Macau Association for the Hearing Impaired (MAHI) also supports the community. It was established in 2021 and has several hundred members. Both organisations are subsidised by the IAS.

Laying foundations for a deaf-friendly Macao

Sign language was not well-known in the 1990s and many of Macao’s hearing impaired had yet to learn it. Anyone that did was considered “weird”, Wong says. Mobile phones barely existed. These days, mobile phones are a crucial tool for helping people with mild to moderate hearing loss communicate with others.

Father Axelrod, now 80, pioneered many services for Macao’s hearing impaired over more than a decade in the city – after arriving in the late 1980s. He was born with Usher syndrome, an incurable genetic disorder causing both deafness and blindness (called ‘deafblindness’). Deaf all his life, Father Axelrod’s vision only began deteriorating in the late 1970s.

He was the one who introduced Hong Kong Sign Language to Macao, which has since evolved into a Macao-specific dialect. For deafblind people like himself, Father Axelrod taught tactile signing – incorporating touch. He went totally blind in 2000, the same year he left Macao for London (where he still lives today). The MDA remained, however, working hard to empower the city’s hearing impaired.

It teaches sign language and lip reading, and organises activities for the hearing impaired and their family members – or anyone interested in supporting this community. The MDA also connects members with job opportunities and facilitates ‘silence experience’ workshops, where participants’ ears are blocked by headphones to give them a better understanding of life without sound.

Macao’s hearing-impaired community started seeing a lot more government support after the city returned to China in 1999. “We [the MDA] started being able to organise more activities and workshops, through which people in Macao began to have more knowledge about our community and association,” Wong says.

By 2010, local TV news was being broadcast in sign language thanks to cooperation between the MDA and Teledifusão de Macau (TDM). In 2016, TDM launched a programme specifically for Macao’s hearing-impaired community – teaching sign language and sharing information about relevant events in the city.

While direct and indirect discrimination towards the hearing impaired still happens, Wong believes society’s increasing familiarity with the community has made it easier to be deaf in Macao. “Nowadays, the media gives our community a lot of coverage, so people are more used to seeing us and they know how we live,” he says.

Wong insists there’s still work to be done, however.

Career-wise, Wong says most MDA members have blue-collar jobs. Many work in hotels as housekeepers, cleaners and logistics workers, others work in catering or wash cars. A minority work in government departments. Wong would like to see the community better represented at management levels.

“Not many deaf people in Macao are able to continue their studies at a university – unless they only suffer mild hearing problems,” he says. “Because of this, many of them can only do basic jobs.”

Those that do make it up the career ladder can feel isolated in their workplaces, as it’s unlikely their colleagues understand sign language.

Wong also urges the Macao government to make the city safer for deaf people. Currently, outdoor emergency warnings are issued via loudspeakers – not particularly useful for anyone who cannot hear. Accompanying these warnings with “lights or vibration” would help, says Wong.

“The city has [toilet and lift] facilities for people in wheelchairs, and [tactile paving] for those who cannot see. It would be great if we have more facilities across the city for the hearing-impaired community too.”

The government is on board

Several government departments, including the IAS and DSEDJ, support residents with hearing loss severe enough to be deemed a disability. These people qualify for allowances and subsidies to buy devices, access services, and obtain treatments that make life as a deaf person easier.

The DSEDJ says it subsidises organisations that provide services, equipment, treatment and various activities for hearing-impaired school students. It also funds training courses to equip teachers with “skills and strategies” to make sure their hearing-impaired students get the most out of lessons.

The IAS, meanwhile, subsidises MDA and MAHI to provide case-based assistance, educational support, and employment assistance services to the hearing impaired and their families, as well as a 24-hour sign language interpretation service. The IAS employs 16 sign language translators for this purpose.

The IAS told Macao News that the bureau is continually striving to build a “barrier-free and inclusive environment” for anyone hearing impaired. Its initiatives include rehabilitation services for people suffering hearing loss through injury or illness, sign language training courses for frontline staff at public departments, and enhancing its sign language interpretation services.

“Through public education, professional training and technical guidance, IAS will continue to encourage and support the community to work together… to create a society based on equal rights and inclusion,” the spokesperson said.

Meanwhile, the MDA continues Father Axelrod’s legacy in Macao through broadening its own reach and range of offerings.

The MDA’s Deaf Support Centre is located in Tower 2, La Magnificence building, on Avenida Marginal do Lam Mau. It also runs the Education Centre for Children with Hearing Problems at Macao Court, on Rua Marginal do Lam Mau, providing support for newborns, children, and young people up to the age of 21.