Ever wondered why there’s a plane in the middle of Seac Pai Van Park? Here’s why. Link copied

In 1987, single-engine Sagres and its crew completed the first aerial journey from Lisbon to Macao and became the first plane to land in the city. Today, the plane is parked in Coloane – a testament to this historic adventure. 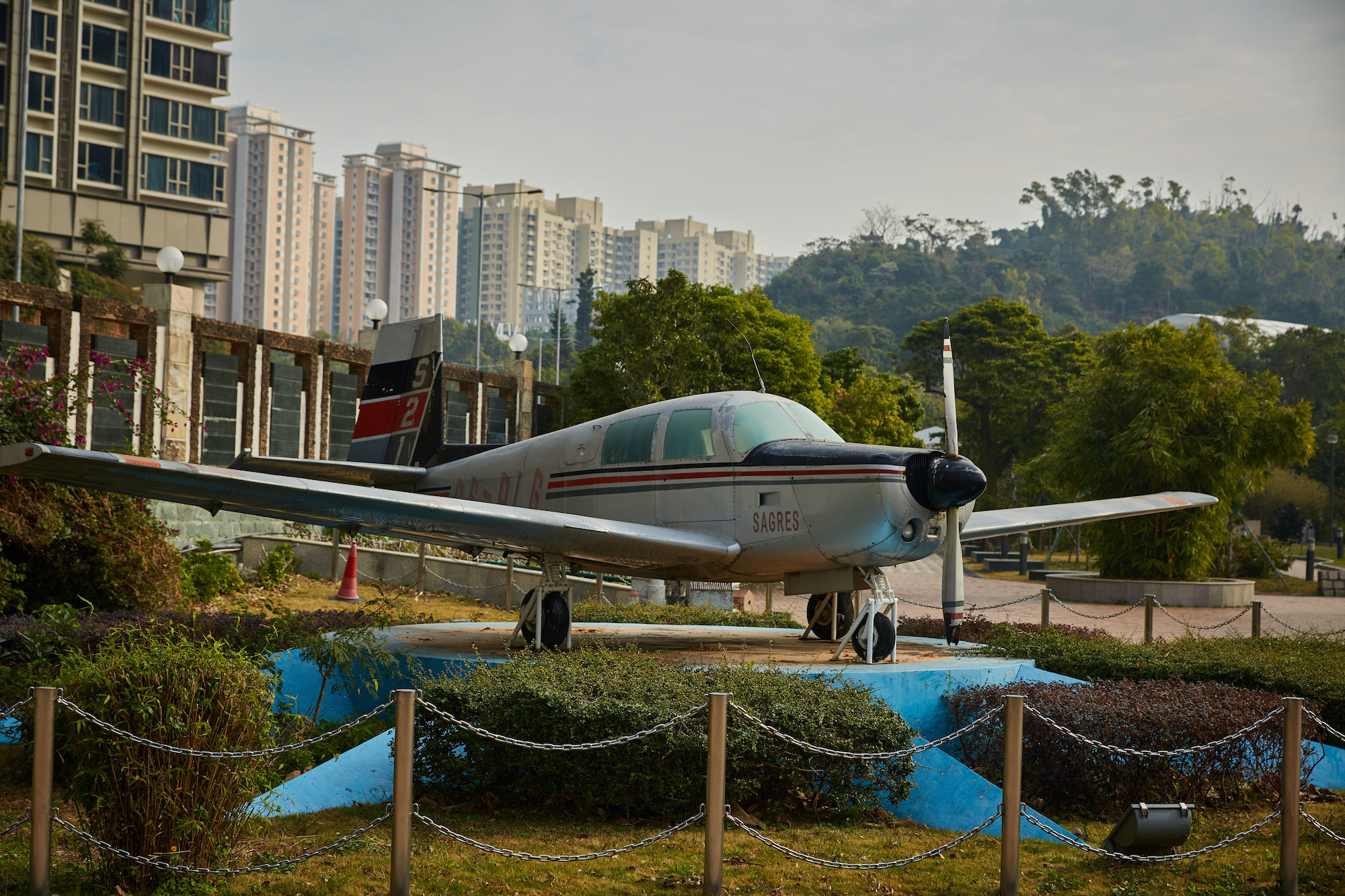 Jorge Cruz Galego, Álvaro Prata Mendes and Arnaldo Alves Leal left Lisbon in 1987, on a single-engine plane named Sagres. The destination? Macao. The goal? To honour Portuguese pilots Sarmento Beires and Brito Pais, and engineer Manuel Gouveia, who made the first flight attempt attempted the first flight journey between the Portuguese capital and Macao in 1924.

Unfortunately, the first plane’s engine failed while flying over India due to a storm. Though no one died, the crew had to wait for assistance. The Portuguese government authorised the purchase of a second aircraft, the Pátria II, which made the final stage with stops in Burma, Thailand, Vietnam and finally in Canton, where it once again conducted an emergency landing. Although the crew once again survived, they couldn’t complete the challenge and ended the journey on 23 June 1924.

Inspired by these earlier adventurers, Cruz Galego, Prata Mendes and Alves Leal finally fulfilled the historic feat 63 years later, successfully landing Sagres in Coloane on 6 February 1987. Still to this day, the plane remains inside the park as a monument of the mission.

“By this time, 1986, people were talking about the end of Portuguese administration in Macao,” explains Prata Mendes. An aeronautical engineer, Mendes was the youngest member of the crew and served as the maintenance director during the trip.

“The flight served as a double tribute, both to those who for centuries ensured Portugal’s presence in Macao as well as to three intrepid aviators who attempted the first air connection,” adds the 74-year-old, who spoke with Macao News on the phone from his home in Portugal.

The beginnings of a historic journey

The idea to attempt the journey started with a discussion between former Portuguese military commander and pilot Jorge Cruz Galego and Dr Fonseca Marques, the CEO of Portuguese brewery the Sociedade Central de Cervejas (SCC).

“Jorge wanted to repeat the attempt at a Lisbon-Macao aerial journey both for national pride and to recognise the earlier efforts,” says Prata Mendes. The SCC, which owns the Sagres beer brand, would ultimately sponsor the aerial adventure. The plane was named after the beer, as well as the name of the Portuguese city in the South, Sagres, from which the Portuguese left by sea to discover the world in the age of exploration.

It was a tight squeeze on board, and the trio had room only for essentials. “There were three of us, and the plane was tiny,” says Prata Mendes. “Luckily, there was no need to take groceries because we had to refuel every five hours, anyway.”

Before taking off on 10 January 1987, the pilots carefully plotted their route and secured the rights to fly and land in each jurisdiction. They had a 15,000-kilometre, multi-leg journey ahead of them, which would require them to stop in 10 countries and make 23 landings along the way.

On average, the pilots flew five hours a day, with one exception – the Corfu to Heraklion, Greece leg – where they flew 10 hours in a day. By the end of the journey, they clocked more than 65 hours – 40 of them at night without visibility – in flight across a total of 26 days.

Challenges in the air, on the ground

Prata Mendes never feared for his life, but he says the crew experienced their fair share of challenges, starting with an expected twist from Mother Nature.

Sagres left Lisbon for Ibiza with ease, but when they tried to take off from Palermo, a huge storm forced them to change course to Cagliari, Sardinia’s capital. “The storm was so massive, it was something absolutely indescribable,” he recalls of that first emergency. “But we managed to land Sagres safely. And from Sicily, we could venture on to Greece as planned.”

Sagres experienced an electrical failure three days later when leaving Corfu that left the crew without instruments or communications. They had to ad-lib, with Cruz Galego navigating based on a magnetic compass and Prata Mendes holding a flashlight so they could see.

“We had another problem when we left Egypt for Saudi Arabia,” recalls Prata Mendes. “The airfield was closed. But fortunately, the lights were on, and we landed in the dead of night. We were lucky.”

They also ran out of fuel on the way to Riyadh, the capital of Saudi Arabia, while flying over the desert. “Suddenly, an airplane runway appeared – Riyadh Air Base – and we had no choice but to land without authorisation. It was either that or the desert.”

While the technical situation had improved dramatically since 1924, social obstacles around the world proved harder to navigate. “The situations at various airports were tough, especially on the legs between Europe and [greater] China,” recalls Prata Mendes.

The trio encountered many problems in Egypt, where in addition to obsolete infrastructure, corruption ran rampant. “I had to pay for everything: to get permission to take off, for the flight plan, to have it signed…”

In Pakistan, where barbed wire and machine guns surrounded the airport, they extended their stay because the country was in the midst of the Indo-Pakistani War (also known as the Siachen conflict).

And in Bangladesh, they flew into a chaotic scene where people and animals roamed the runway, as though it were just another road in the city. “When the siren sounded, the traffic would clear, and then planes could land or take off,” he says.

Just as they entered the home stretch, the crew encountered one last hiccup. While they made a stopover in mainland China, a cyclist crashed into the plane overnight. “I don’t know what the man was doing with the bicycle on the airfield… ” says Prata Mendes. “The plane was very badly damaged, with a dented wing and a torn plate. But [airport staff] helped us fix the plane, and we managed to get to Macao.”

Ahead of their landing in Macao, which did not have an airport at the time, then Macao Governor Joaquim Germano Pinto Machado Correia da Silva built a runway in Coloane for the sole purpose of receiving Sagres.

“It was the first plane to land in Macao,” Prata Mendes says, proudly. “Definitely, I would do it again. It was a very instructive adventure. It is a remarkable event.”

Roughly a dozen people, including several official delegates, met Sagres as it descended onto the runway to welcome the pilots and celebrate the momentous event. The city also held a large reception with fireworks, dragon dances, dinners and lunches, press conferences, and many interviews for the next few days.

That day, Governor Pinto Correia awarded the three pilots the Macao Sport Merit Medal (Medalha de Mérito Desportivo de Macao) and named them national heroes. They were also given a commemorative plaque with the trip’s names and date, which was placed inside the Leal Senado building next to a similar plaque honouring the 1924 mission by Sarmento Beires, Brito Pais and Manuel Gouveia.

With the festivities behind them, the pilots planned to retrace their steps back to Lisbon. They left on 15 February, but a fuel leak forced an emergency landing in Lishicun, in Yunnan province, and severely damaged the plane.

As it would have been impossible to fly Sagres back to Portugal, the pilots left the plane in mainland China and continued home. The Portuguese ambassador in Beijing later sent the aircraft back to Macao for repairs.

According to the Municipal Affairs Bureau, the crew offered the plane to Macao’s Provisional Islands City Council, in 1987. The government moved Sagres to Seac Pai Van Park, very close to the landing site, in memory of the feat. And still today, it can be visited by residents, tourists and aviation enthusiasts alike.

The experience also resulted in a book, Raid Aéreo no Sagres de Sagres a Macau, (loosely translated to ‘Aerial Flight in Sagres from Sagres to Macao’, in English) written by Jorge Cruz Galego, one of the pilots, and published in 1988.

He describes the journey as one of the most memorable experiences of his life: “We landed nervous and tired. Thrilled, we watched the many celebrations that followed, while receiving greetings from entities and friends there. It was worth it!”