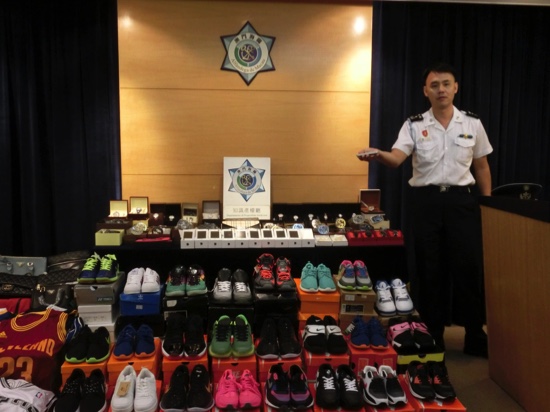 Macau Customs Service officers have busted a 53-year-old logistics company owner, surnamed Lai, and a 56-year-old driver, surnamed Kou, on suspicion of smuggling bogus goods into the city from the mainland before sending them on to a third destination.

Both male suspects are local residents, according to the Customs Service.

Customs Service spokesperson Ian Chan Un revealed details of the case during a press conference at the Customs headquarters in Barra on Tuesday.

Ian said the counterfeit items included mobile phones, watches, handbags and shoes, adding that officers discovered the items while inspecting 120 boxes of cargo at the airport on August 12. The officers found 34 boxes not listed on the manifest.

Ian said that Kou had brought the cargo into Macau from the mainland through the Cotai-Hengqin checkpoint. The contraband was to be sent by plane to a third destination.

Ian said part of the smuggled goods infringed the copyright of brands such as Adidas, Apple, Chanel, Gucci, Rolex and New Balance, adding that the Customs Service had contacted some of the brands’ copyright holders and determined that the items were fakes.

Also speaking at the press conference, Cheng Kin Chong, another Customs spokesperson, said that the counterfeit items were worth more than 1.5 million patacas if sold as genuine. “There are some tricks on the manifest … A destination was written, but we found that it was false.” Cheng said that as the local Customs were still investigating the case with their mainland counterparts, he was unable to comment further.

The two suspects will be transferred to the Public Prosecution Office (MP) for possible property rights violation charges. If convicted, they may be slapped with a six-month prison sentence.

In addition, the Customs may also impose an administration penalty on Lai’s company for breaching the External Trade Law, facing a maximum fine of 50,000 patacas, according to Ian.