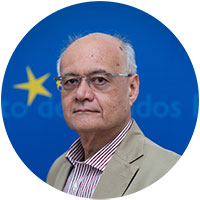 José Luís de Sales Marques was born and raised in Macao. After a degree in Economics in Portugal, returned to Macao and worked with the government starting in 1983. He was mayor of the City Hall (Leal Senado) for eight years and has been the president of the Institute of European Studies of Macau since 2002. He is also the president of the Council of Macanese Communities.

The Greater Bay Area of Guangdong, Hong Kong and Macao is a regional integration process that will lead to the formation of a world class megapolis integrated in China’s national development strategy.