From a young age, Chan Man or ‘MP Man’ has had a passion for comic artwork – and the talent to match. 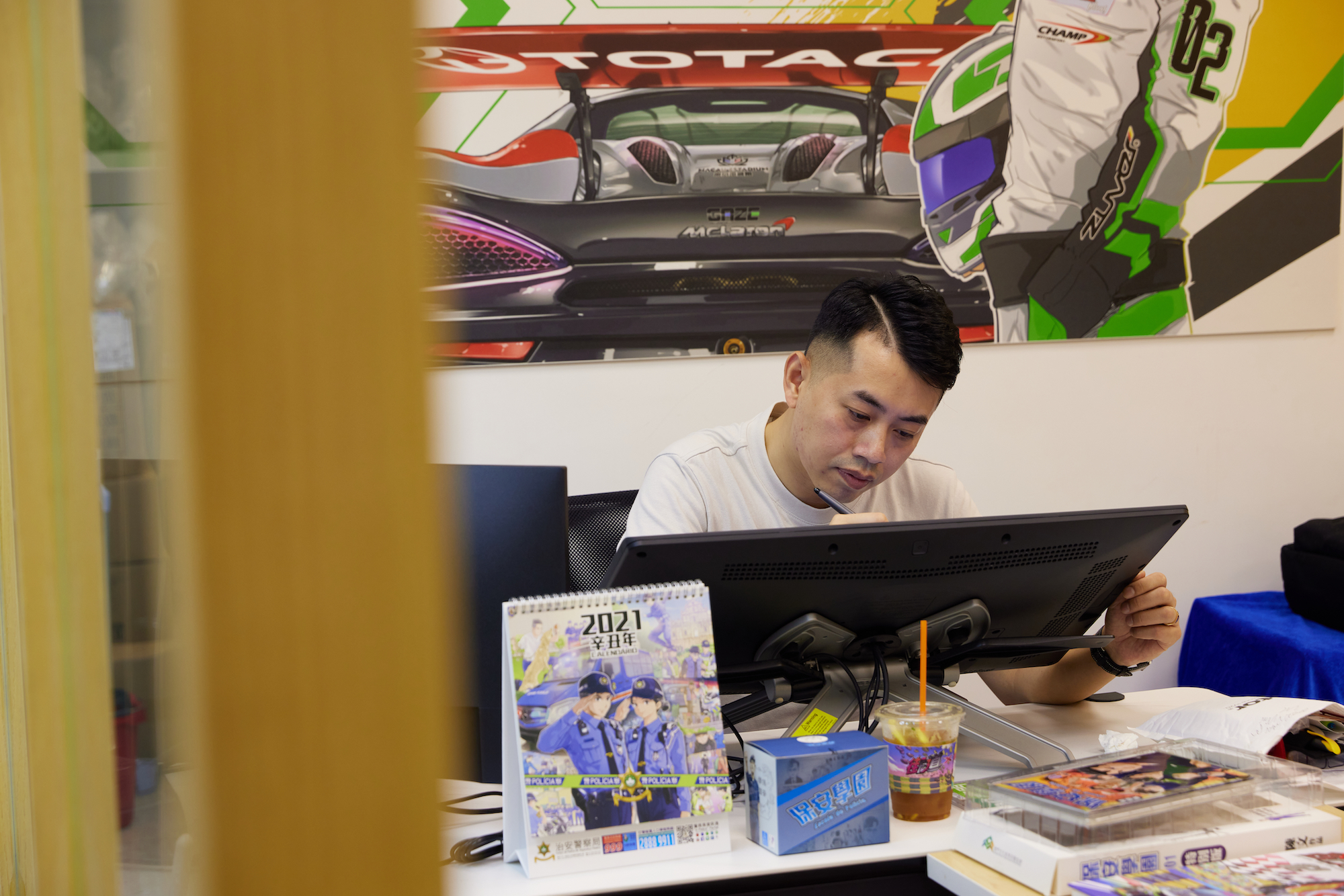 When one thinks of policemen, rarely do comics come to mind. But Chief Constable Lei Wai Man – who goes by his pseudonyms, ‘Chan Man’ or ‘MP Man’, when it comes to art – bucks stereotypes as a successful comic book artist. The 44-year-old Macao native, who has been creating comics since his teens, published two comic books – successful ‘Escola de Polícia I’ 《保安學園 I》 and ‘Escola de Polícia II’ 《保安學園 II》– in 2017 and 2018, respectively.

He also applies his talents during his day job in the police’s Public Relations Division, where he creates entertaining and engaging comics about crime prevention, community services, police training, events and more. From developing his unique comic style to researching race cars for a book, the police veteran shares his atypical story with Macao News. Chan, who grew up in 1980s Macao, loved reading Hong Kong comics  – like Old Master Q 《老夫子》, Yok Long Comics 《玉郎漫畫》 and Birthday Boy《壽星仔》 – as well as Japanese manga as a youngster. Inspired by the masters, Chan taught himself to draw when he was around 15 years old.

To improve his skills, he joined a Macao-based art club, where he learned from other local comic artists. With practice, he gradually developed his own style, which is inspired by Japanese manga.

“The club is not around anymore, but that’s where I improved my comic drawing skills,” Chan says. He also learned about storytelling fundamentals – character development, dialogue and action – to take his work to the next level. But just as he was gaining momentum, Chan hit a setback. He self-published his own comic book and promoted it around the city. “It proved to be very difficult and was somewhat dejecting to see little support,” says Chan.

Unsure he could make a living as a comic artist, Chan set down his pen and pursued a more stable career path. In 1997, he joined the Public Security Police Force (PSP) and left his art in the past.

Life flew by in the subsequent years. Chan got married in 2006, had three daughters and became very busy with work. While he would occasionally doodle, he didn’t have much time to commit to his comic art.

But in 2014, some of his colleagues discovered his artistic skills and encouraged him to share comics on social media under the pseudonym, MP Man (陳文). Why MP Man? “There’s an easy answer to that: It stands for “Macao Police Man,” he says.

With a Macao PSP station as the setting, Chan’s manga-style comics traced the lives of five young officers during their careers. Once he started sharing his work on social media, Chan saw positive feedback. The first post garnered around 1,100 likes and 86 shares, while subsequent comics typically saw 300 to 700 likes per post.

This gave him the confidence to compile his comics and publish them as a collection, entitled Escola de Polícia I (《保安學園 I》) in 2017. In 2018, he published a sequel, Escola de Polícia II (《保安學園 II》), which turned a spotlight on the police training academy. Through his comics, Chan hoped to show readers how to become an officer, as well as what life is like in the force. 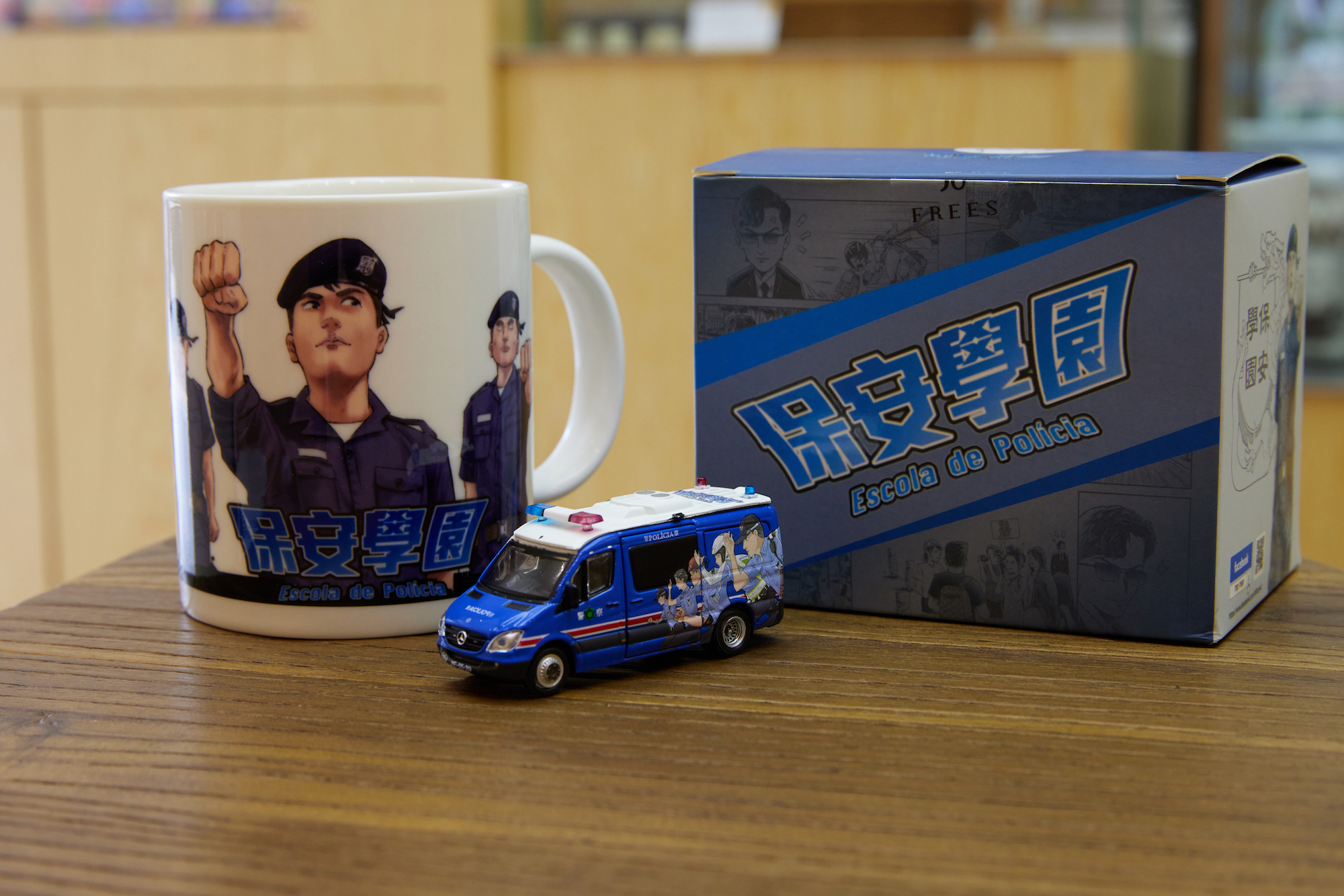 “It’s all about the five main characters, who learn discipline but also find moments of joy and laughter in the academy,” says Chan.

While the series was successful, Chan realised that many people mistook his personal projects for official PSP comics, so he decided to end the series. “That’s why the series had only two instalments,” he says. “It was also creating some confusion – I wanted to differentiate my personal work from my police work.”

Moving away from police-themed comics, Chan gravitated towards another passion in his life: Motorsports. Chan has always loved Macao’s Guia Circuit – and with this inspiration in mind, he created another comic series called, Heróis do Circuito (《街道》).

To research the first volume, which published in 2019, he learned all about Macao’s former Formula 3 champions. He even reached out to Macanese racing driver Michael Ho Hon Keong to ask for permission to feature him in the comic series.

“Michael asked me to meet up and bring my work to show him before agreeing to my request,” Chan recalls. “When he saw my sketches, he thought they were pretty decent and gave me the go ahead.” 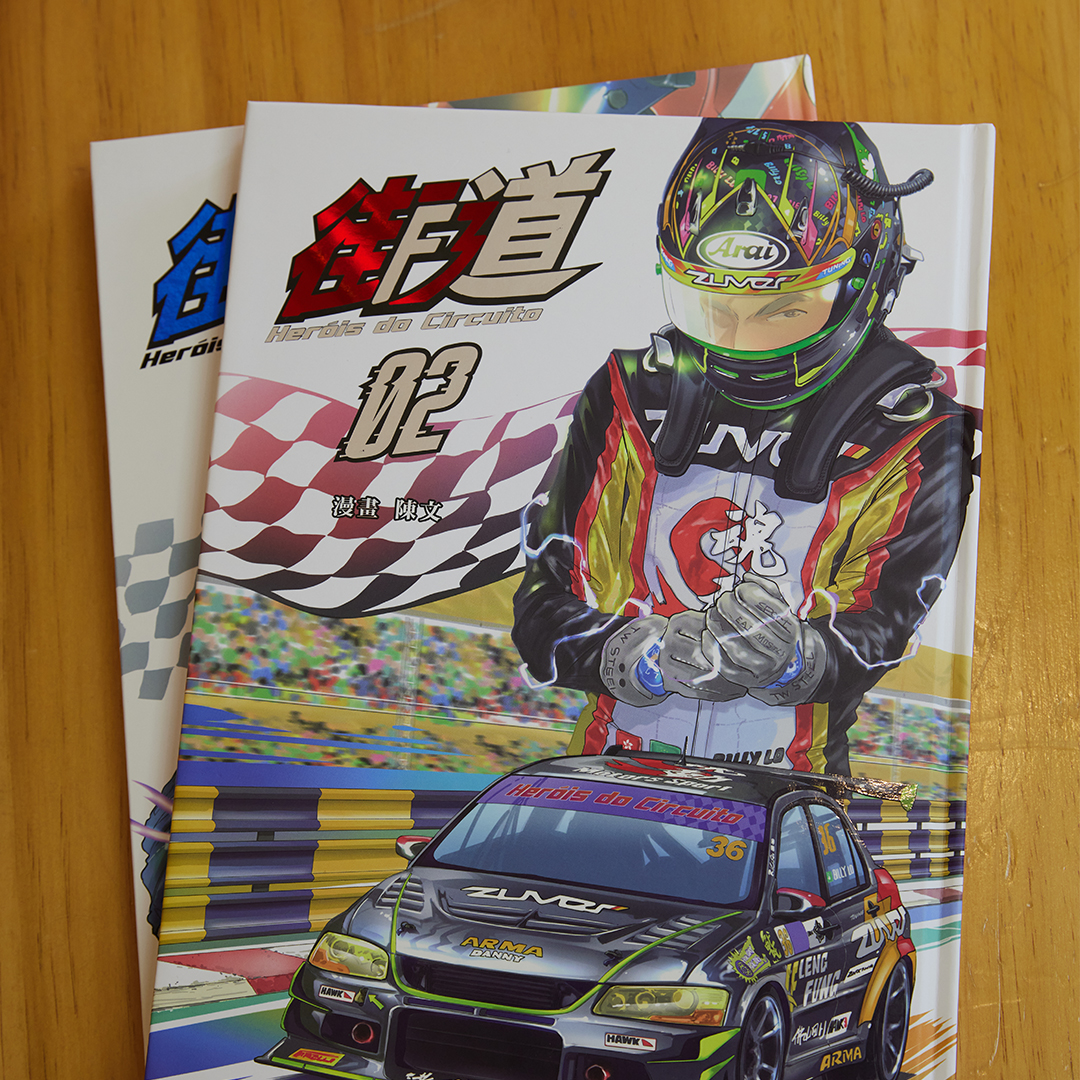 Ho also gave Chan access to the inside of one of his race cars – an F4 practice car that novices use to train – so the artist could sketch the car design, roads, and angles as accurately as possible. In addition, Chan also took street shots of the Macau Grand Prix and the Zhuhai International circuits to have lots of visual references.

“For this comic, there was quite a lot of research that needed to be done to make the drawings as realistic as possible,” he says. “One of the more interesting things I learned was how an entire racing team operates behind one vehicle. It’s definitely not easy,” he says. These types of insights and industry examples, he says, helped to make the story more interesting and accurate.

Chan’s work caught the attention of the Macao Government Tourism Office (MGTO), which led to an excellent opportunity for the artist. Before the Macao Grand Prix Museum opened in June 2021, the Office invited Chan to create a mural for an exhibition on the FIA GT Cup, an annual event during the Macau Grand Prix where GT cars compete. According to the MGTO’s brief, Chan needed to feature all the winning vehicles in the image. A challenge, seeing as GT3 category cars first started racing in 2007 and there have been more than 10 winners so far. “At first, they gave me just one wall to work on. Then I offered to also extend the mural onto the adjacent wall, so all the winning vehicles could fit,” he says. With help from another artist, the mural took him about two months from start to finish.

Chan says that Macao is a racing city with a long motorsports history, and he loves that the circuits take place on actual streets. This history, combined with his love for comics and driving, fueled the project and inspired him to produce this second series about motorsports,  Heróis do Circuito (《街道》), with the second instalment published early this year.

“I wanted to create a set of original racing comics for Macao people,” he says. “It’s meaningful because this would be the city’s first racing caricature.” 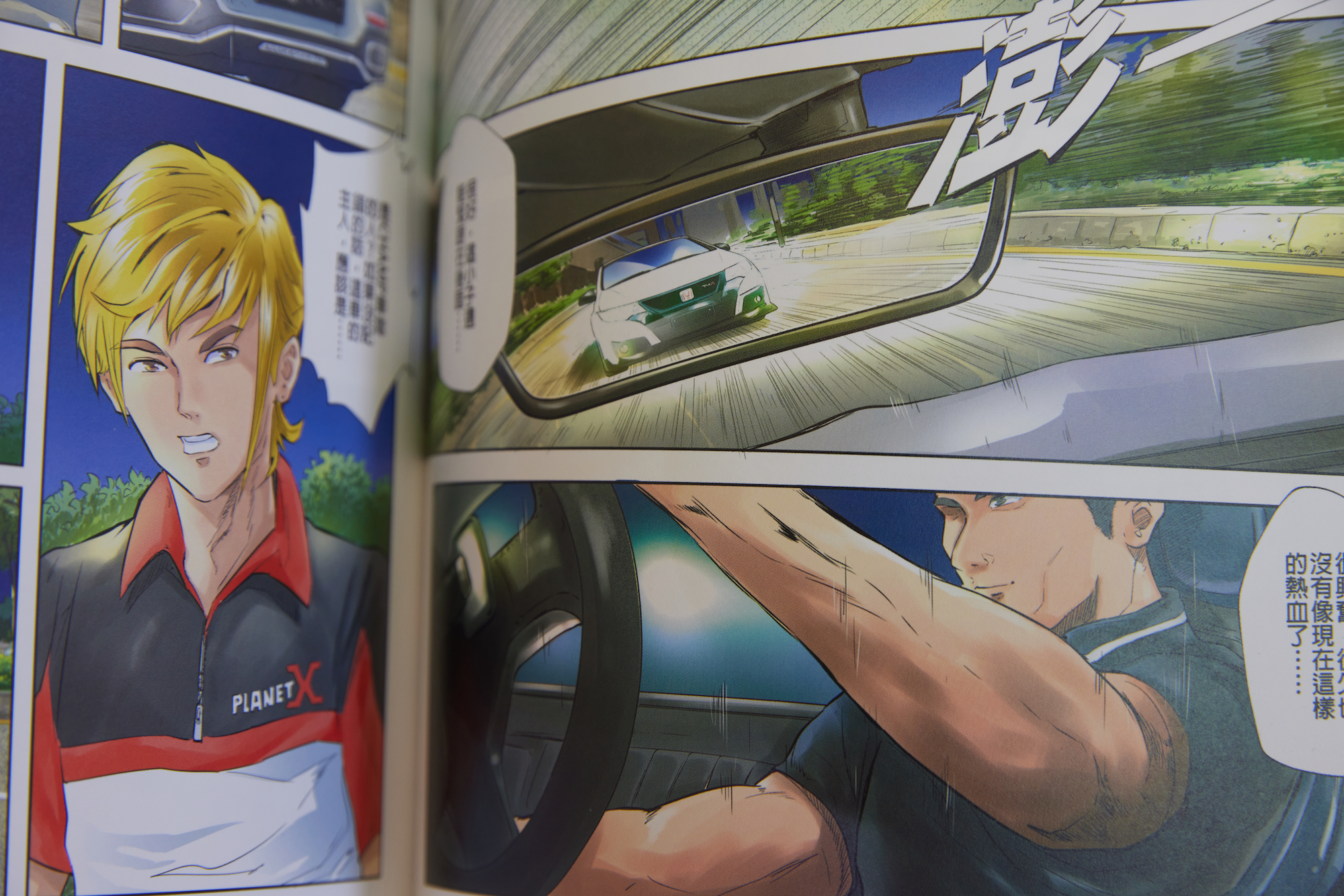 While Chan has found success as an artist in Macao, he believes the local art scene needs more support to truly thrive. To create his own work, he relies on a mix of government resources, commercial sponsorships, family, friends and his own savings. For example, Heróis do Circuito was created with a mix of his own savings and support from friends. While he isn’t sure of the exact figure, he estimates that the book cost MOP 40,000-50,000 to produce around 100 copies.  “Someday, I hope that the comic industry can be self-sufficient and we have more opportunities, and a certain degree of competitiveness in the market,” he says.

Outside of his passion projects and day job at the PSP, Chan also handles advertising and merchandise design for his wife’s coffee shop, Another Coffee. He even created the store’s cat mascot, which he hopes is unique enough to capture consumers’ attention. At the moment, his wife is relocating the cafe to a bigger space inside the Macao Grand Prix Museum, with plans to open by October.

“I have three things to balance right now – my day job, comics and the coffee shop,” he says. “It can be stressful to choose which of my responsibilities to work on first, but I usually go with what is most urgent. I simply hope to be a good example for other artists, so they know there is hope for creatives in Macao.”