The Eurasian multi-millionaire blazed a trail through the commercial and social life of Macao and Hong Kong leaving a legacy that endures today. 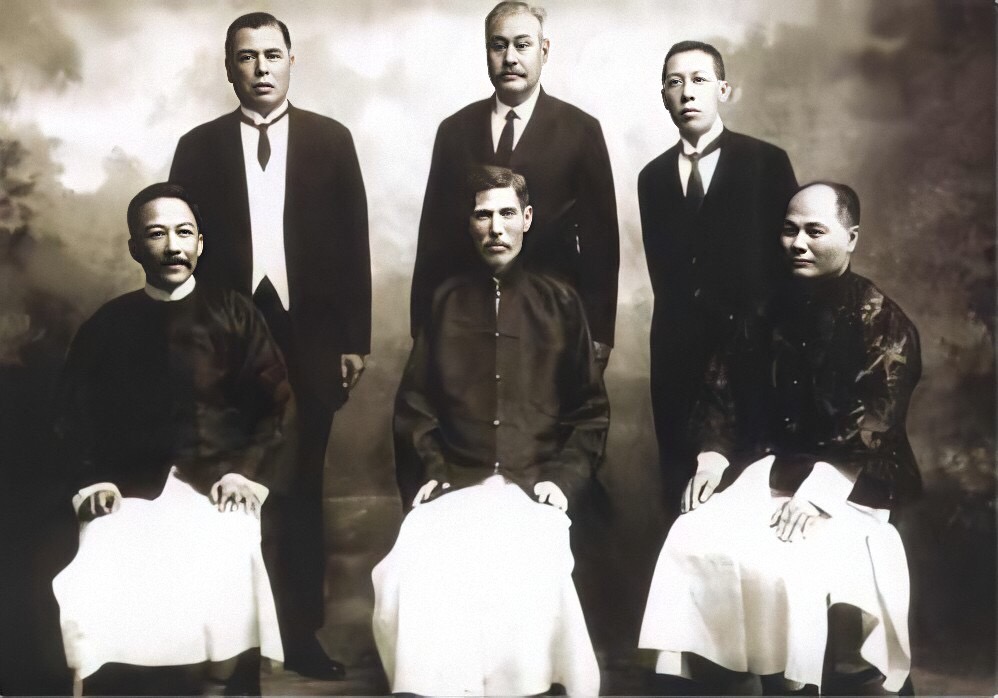 Robert Ho Tung was born at the perfect time in the perfect place, two strokes of luck that set him on the fast track to success throughout his life. Half European, half Chinese he bridged the two sides of society in Hong Kong while it was developing from a fledgeling colony to an international entrepot.

What’s more, Ho Tung was highly intelligent, a hard worker, charismatic and filled with boundless curiosity. Small wonder that he prospered, that his descendants rose to become some of the region’s most influential entrepreneurs, and that his name is commemorated in both Hong Kong and Macao.

There is no more sterling example of Ho Tung’s achievements than the library that bears his name in central Macao. The elegant three-storey building with arched windows and a gentle ochre façade set in a century-old garden in São Lourenço is the largest library in the city.

Containing 100,000 volumes, including a treasure trove of 5,000 ancient Chinese classics, it is but one of many legacies left by the remarkable Sir Robert Ho Tung, who was – needless to say – an avid bibliophile. Born in December 1862, he became the richest man in Hong Kong, was the first Chinese to live in an exclusive area of the colony previously reserved for Europeans, and was decorated for his charitable and educational work.

Ho Tung’s golden gift was his cosmopolitan background, which allowed him to switch back and forth between different ethnic communities and made him an ideal comprador – the middlemen between exporters of Chinese goods and foreign companies who bought them. He became one of the first international Hong Kong businessmen, investing in many cities outside the colony and travelling frequently to Europe and North America.

Since Hong Kong’s colonial government did little for its Chinese population, it was left to Ho Tung and other merchants to pay for schools, hospitals and other welfare facilities.

Nor did he neglect his mother country – he supported Dr Sun Yat-sen in his revolution against the Qing dynasty. One day he would dress in ceremonial uniform to receive a Qing official, and the next he would be giving money to the revolutionary cause. He was also a friend of reformers Kang You-wei and Chiang Kai-shek, two of the most important figures of modern China. The library was his largest gift to Macao. It was built in 1894 for Carolina Antonia da Cunha, the wife of a colonial official, and passed through several owners before Ho Tung purchased it in 1918 for MOP 16,000 intending to use it as a summer retreat. Then, as now, it occupied a prime site, next to the St Joseph Seminary and the Church of Saint Augustine. The area today is part of the World Heritage Site of Macao.

When the Japanese army overran Hong Kong in December 1941, he moved with his family to Macao, which being a city under Portuguese administration was neutral, and remained there for the rest of the war. After his death in April 1956, he bequeathed the house to the government as a Chinese library, with a legacy of HK$25,000 to buy books.

It opened officially as a public library on 1 August 1958, with 3,000 volumes. After the handover of the Portuguese administration to the Chinese in 1999, the government invested MOP 10 million in a new structure at the back of the building, to hold more books and provide all the attributes of a modern library.

Reopened on 13 November 2006, the new temperature-controlled library and its 544 work stations spread over 3,000 square metres, while the garden was half as big again. The new facility held 100,000 books, and was equipped with a multimedia room, exhibition space, broadband computers and music and film rooms. Fifteen years on, it’s incredibly popular, pulling in more than 1,000 readers a day.

“He was a man of culture and bought these books over many years,” says Gary Ngai, founder of the Macao Association for the Promotion of Exchanges between Asia-Pacific and Latin America.

“Other people would buy books and then sell them on after reading them. Ho did not need the money so he kept them. There are few libraries in the mainland with such a collection of ancient books. The Red Guards destroyed many of them during the Cultural Revolution. Scholars from the mainland come to see the library and express their admiration.”

The story began just before Christmas 1862 when Ho Tung was born in Hong Kong to a Dutch Jewish father, Charles Henry Maurice Bosman, who later took British citizenship, and a Chinese mother named Sze Tai (施娣) from Baoan county, now Shenzhen, in Guangdong. They had five sons and three daughters. His father left the colony after his business failed, and the children were raised as Chinese by their mother.

Ho Tung had private tutors and attended Queen’s College in Causeway Bay, where he achieved outstanding results in his exams. After graduating in 1878, Ho Tung took a job in the Guangzhou customs office. In 1880, he moved to Jardine Matheson, the biggest British trading company in Hong Kong, working as an interpreter and assistant. He rose quickly in the firm, and within two years was given responsibility for two of its insurance companies.

He also set up his own firm, Ho Tong & Company, which initially traded in sugar. In 1894, he was appointed manager of Jardine Matheson’s China operations, a post he held until 1900, when he resigned to devote himself to his own business. His brother Ho Fook replaced him. By that time, he had already become one of Hong Kong’s richest men, with a personal fortune of more than HK$2 million, which would be equivalent to about HK$62 million today.

Power behind the throne

When he was 18, Ho Tung married Margaret Mak, the Eurasian daughter of Hector Coll Maclean of Jardines, when she was 16. As she could not bear him children, he took a concubine named Zhou Jiwen 周綺文. After three years, it emerged that she was also unable to conceive.

So, nothing if not pragmatic, Mak introduced her cousin, Clara Cheung Lin-kok, as Ho Tung’s second wife. She bore him three sons and seven daughters. Cheung was a devout Buddhist and encouraged him to engage in charity work which occupied an important part of his later life.

In 1906, he obtained the permission of the governor, Sir Matthew Nathan, to live on Victoria Peak, the first Chinese to inhabit this most expensive and secluded district of Hong Kong, which had been previously reserved for whites. It was a step up the social ladder which in its way exceeded his achievements in business. Ho Tung came to own four houses on the Peak, and to minimise conflict among his women, he put his two wives, his concubine and their families in separate houses.

In 1910, he fell dangerously ill from overwork and his weight fell to less than 60 pounds. He was confined to bed for over a year but Cheung nursed him through this crisis, caring for him night and day and reciting Buddhist scriptures. Thanks to both her care and his doctor’s efforts, he recovered from the illness and lived for another 45 years.

Ho Tung also founded the Chinese Club, which he set up in response to the Hong Kong Club, a colonial institution which did not admit non-white members.

Other members of the family were just as productive. His brother Ho Fook had 13 sons, of whom five worked as compradors for foreign companies. One of his grandsons is Stanley Ho, the Macao casino and shipping magnate. Another brother, Ho Kom-tong, had 12 wives and more than 30 children. One of them was the mother of Kung Fu star Bruce Lee. His former house, Kom Tong Hall, in Mid-Levels, now houses the Dr Sun Yat-sen Museum.

Knight of the realm

After enjoying considerable success in business in Asia and other parts of the world, in his twilight years, Ho Tung devoted much of his time and money to charity and education.

He was one of the founders of Hong Kong University and a director of Tung Wah Hospitals and Po Leung Kuk. The first Tung Wah hospital was established in 1870, providing free Chinese medical services to the sick and the poor. It built two more hospitals in 1911 and 1929, and has become the largest charitable organisation in Hong Kong, with 2,670 beds in five hospitals, 2,000 service centres and an annual turnover of HK$4.7 billion.

In his will, Ho Tung bequeathed HK$500,000 to the Sir Robert Ho Tung Charitable Fund, which continues to donate about HK$10 million a year to such charities as the Hong Kong Red Cross, the Salvation Army, the Hong Kong Society for the Prevention of Cruelty to Animals and the Family Planning Association.

Ho Tung’s philanthropic work did not pass unrecognised. Among a slew of awards, he was knighted by King George V of Britain in 1915 and decorated by the Portuguese government in 1952.

He died on 26 April 1956 in Hong Kong, aged 93, and was greatly mourned. In Hong Kong and Macao, many schools and buildings are named after him, including the Lady Hotung Hall at Hong Kong University, the Hotung Secondary School and the Tung Lin Kok-yuen Buddhist temple.

“He was a diplomat in the civil sector,” said Ngai. “He was a bridge between China and the West. He was equally at home in the strict rituals of both the Qing government and the British aristocracy.”