“Macao Boxing Open Championship” organised by Ng Kuok Kun aka KK, explained why he decided it was time to get local boxers back in the ring. 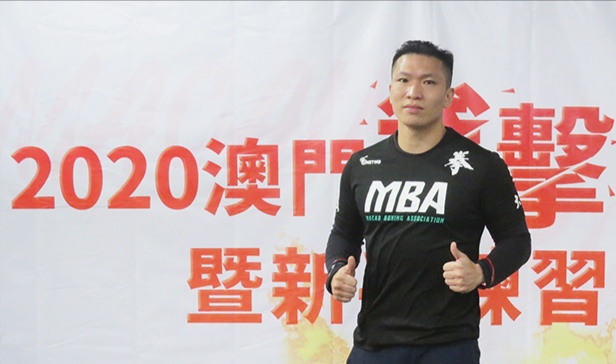 It was all hustle and bustle at the Macao Boxing Association’s (MBA) gym in Areia Preta district Friday afternoon as they prepared for a night of boxing now that all sports can be played as the city is safer than earlier this year as the major threat of the Covid-19 pandemic has been largely controlled.

“Macao Boxing Open Championship” organised by Ng Kuok Kun aka KK, who is also a trainer at the gym, sat down with the Macau Post Daily Friday afternoon and explained why he decided it was time to get local boxers back in the ring.

“Initially we had decided to enter a competition with our boxers every year, but this year is so different because of Covid-19 so we couldn’t [do it]” KK said.

In August, KK organised the “2020 Youth Boxing Training Programme” as he tried to do something different; it was still a competition, and it was to “give the boxers heart to continue.”

KK went on, “Now Macao is safer than before and every sport can now organise competitions.

“We decided to organise this, which is the first competition this year”.

He added that “the fighters need more competition so that they can go outside and fight, so if they want to represent Macao we need to do small competitions.”

Leong Kin Fong, who turned professional in 2014 and then stopped for a while, resumed fighting three years ago and has been attending a vocational training course. KK said, “Fong has fought in [mainland] China twice and won both times, but they were not official fights, but at least he could go and have them. There is an official ‘Asia Competition’ in February, the date is not finalised yet, it was originally to be held in Indonesia but because the Covid-19 situation there is not good they [the organisers] are looking for a new venue.”

KK explained, “We are now targeting the Asian Games in 2022, so we shall put on more competitions so that he [Leung] can get more experience. He can also go to training camps in [mainland] China, like in Guangzhou, next year. Fong finishes [his course] next year so he will have more time to train. We shall set up three local competitions next year so he gets a lot of preparation.”

There were nine fights on the card last night, the first was a ladies fight with KK-trained Cheong Iok Heng – a policewoman by profession – having her second fight after losing to Macao Boxing House’s Cheong Lai Kuan late last month. KK said that Cheong had mentioned she thought the fight was fun and wanted to have another one.

Also on the card were a couple of schoolboys. KK said that he has training classes for schoolchildren and decided that they should have a little fight but he couldn’t find any opponents locally and schools in the mainland “had to give their permission and the kids would have had to do 14 days quarantine when they went back,” so his fledgling pugilists fought each other.

Leung was last on the card and fought Lo Hong.

The results of Friday evening’s bouts will be published by the Macau Post Daily on Wednesday.