The University of Macau held its opening ceremony to celebrate its 40th anniversary, which also coincided with its annual Open Day. 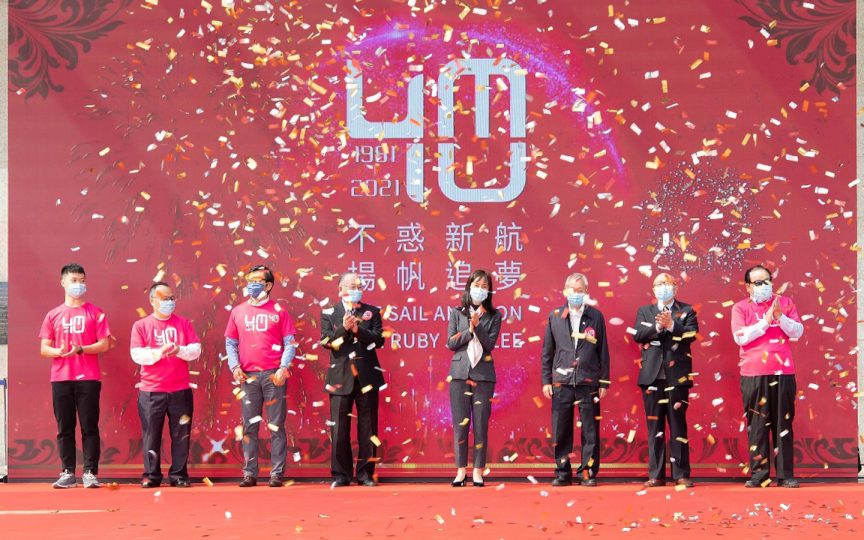 The University of Macau (UM) held an opening ceremony in the plaza in front of the public tertiary education institution’s library to celebrate its 40th anniversary on Sunday, coinciding with the annual Open Day.

The opening ceremony began with a video that reviewed the history and development of the university over the past four decades.

Addressing the ceremony, Secretary for Social Affairs and Culture Elsie Ao Ieong U said in a speech that the University of Macau is not only a microcosm of higher education development in the city, but also an important witness to the development of Macao.

Ao Ieong pointed out that in 2009 the Standing Committee of the National People’s Congress (NPC) approved the construction of the new campus in Hengqin, giving the university the “beautiful” campus it has today.

The campus is located on a one-square-kilometre plot of land leased by the Macao Special Administrative Region (MSAR) from Guangdong province. The campus is under Macao’s jurisdiction.

Ao Ieong also pointed out that the university is ranked among the best in Asia and places equal emphasis on teaching and research, with a number of key laboratories and strong capabilities in areas such as microchip research, quality research in traditional Chinese medicine (TCM), and Internet of Things (IoT) for smart city developments. She also said that none of the accomplishments would have been possible without the nation’s support.

Meanwhile, UM Rector Song Yonghua said in his speech that “looking forward, UM will continue to fulfill its social responsibility and align with the government policy and direction in higher education and technological innovation.”

According to a UM statement, the anniversary slogan is, “Set sail anew on the ruby jubilee”, meaning that the university is stepping into a new era and it is time to take stock of past achievements and look forward to new goals and dreams. The statement underlined that in recent years the university had made new breakthroughs in the development of artificial intelligence (AI) technologies, such as autonomous buses.

The university also held its Open Day for members of the public to experience its development in teaching and research as well as its campus life. The university will hold a number of celebratory activities with different themes throughout the year.

Then named University of East Asia (UEA), the higher education institution was founded by private investors in March 1981. In 1988 Macao’s then Portuguese administration bought the university, which was renamed University of Macau in 1991. At that time its official acronym was UMAC.