The government on Wednesday opened a base with the aim of strengthening young people’s patriotic education, Chief Executive Ho Iat Seng said in a speech. 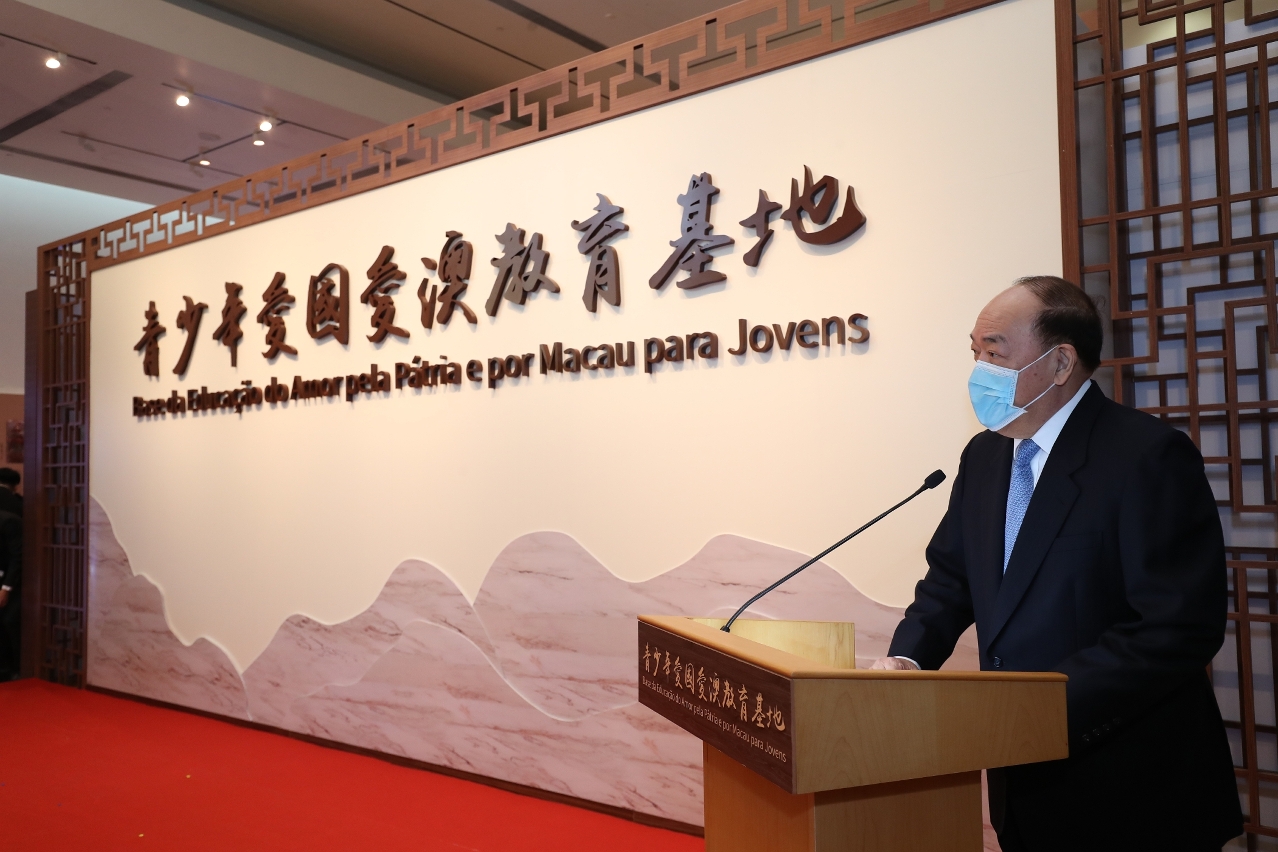 The government on Wednesday opened a base with the aim of strengthening young people’s patriotic education, Chief Executive Ho Iat Seng said in a speech.

Ho made the remarks at the opening ceremony for the “Loving the Country, Loving Macao Education Base for Young People” at the Macao Handover Gifts Museum in Nape.

Ho pointed out that he suggested setting up the base in April during his Policy Address for 2020, as he wished to pass on the love-your-country mentality and create a space for local youths to better understand Chinese history and the growth of the country and Macao.

Ho also noted that last year when President Xi Jinping visited Macao for the 20th anniversary of Macao’s return to the motherland, he purposely visited local schools and after attending a history class, he stressed the importance of history. Ho said Xi had told him that to build patriotism one first needs to understand history.

Ho also said that amid the Covid-19 pandemic and thanks to the guidance and care of the central government and local residents’ cooperation, Macao has been able to achieve a “hard-earned result”. He stressed that through Macao’s response to the novel coronavirus pandemic, the advantages of the “One Country, Two Systems” have been reaffirmed.

The base consists of three sections – “In-Depth Chinese Culture”, “Resistance and Salvation of the Chinese People” and “The Achievement of World-Renowned Modernisation”.

One of the pupil guides at the base, Pun Lai San, told reporters on the sidelines of the opening ceremony that the exhibition covers various topics such as wartime, modern days and Macao history. She also noted that the base includes a history hallway that tells the chronological story of Macao during different historical periods.

Another pupil guide at the base, Ho Pui Ieng, told reporters that she found the base to be very educational, adding her favourite part is the section about Confucianism. She pointed out that the exhibition area uses multimedia to tell history, which makes it easier for pupils to understand the past.

According to a statement handed out during Wednesday’s ceremony, the government’s patriotic education programme will use the base as its primary venue combined with various teaching resources and materials, with the aim of enabling young people to learn more about the history and socio-economic development of the nation and Macao in a “lively” way.

The ceremony and a guided tour of the venue was attended by senior local and mainland government officials, community leaders, lawmakers, pupils, the media and other guests including Macao’s first chief executive Edmund Ho Hau Wah in his capacity as vice-chairman of the National Committee of the Chinese People’s Political Consultative Conference (CPPCC), Central People’s Government Liaison Office in the Macao Special Administrative Region (MSAR) Deputy Director Luo Yonggang, Acting Commissioner of the Office of the Foreign Ministry Commission in the MSAR Wang Dong, Legislative Assembly (AL) President Kou Hoi In, and National Museum of China (NMC) Deputy Director Shan Wei, who is also the secretary of the museum’s Communist Party of China (CPC) Committee.