Health Bureau (SSM) Director Lei Chin Ion said on Tuesday that the Macao government is considering the possible easing of its months-long ban on foreigners entering Macao, provided that they enter Macao from COVID-19 low-risk areas, such as the Chinese mainland. 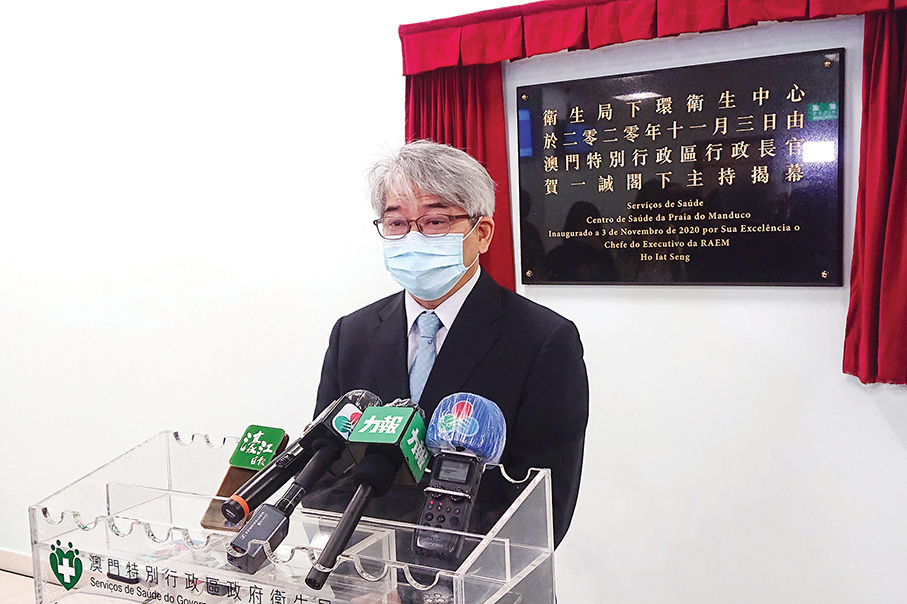 Health Bureau (SSM) Director Lei Chin Ion said on Tuesday that the Macao government is considering the possible easing of its months-long ban on foreigners entering Macao, provided that they enter Macao from COVID-19 low-risk areas, such as the Chinese mainland.

Only those in special circumstances, such as those visiting family members who are Macao residents or those with “important” links to Macao, would be covered by the possible easing, according to Lei.

According to Lei, foreigners allowed to enter Macao would be subject to the government’s 14-day quarantine requirement – even if they enter Macao from the mainland.

Lei made the remarks while speaking to reporters after attending Tuesday’s inauguration ceremony of the new Praia do Manduco Health Centre, known as Ha Van Health Centre in Cantonese.

Based on the “One China” policy, which is strictly adhered to by the Macao government, visitors from mainland China, Hong Kong and Taiwan are considered compatriots by the local authorities so that they are not covered by the entry ban on foreign nationals.

The two executive orders signed by Chief Executive Ho Iat Seng about the entry ban on foreign visitors and foreign non-resident workers state that in the public interest, particularly for the prevention, control and treatment of diseases, aid and emergency measures, and with the aim of ensuring Macao’s normal operation and the provision of daily necessities for residents, Macao’s health authorities can in exceptional cases exempt foreign nationals from the entry ban.

The Health Bureau has said that since March it has exempted certain groups of foreigners from the entry ban in the public interest in line with the two chief executive orders, such as crew members of airlines, diplomats and their family members, senior management staff members of local higher education institutions, those living in the mainland but having to come to Macao for important meetings, and persons who are “very important” to Macao’s economic recovery such as those involved in the upcoming Macao Grand Prix (MGP). All those foreigners who have been exempted from the entry ban have been subject to Macao’s 14-day quarantine requirement, the Health Bureau has said.

Speaking to reporters on Tuesday, Lei said that for the time being it is unsuitable for Macao to ease its COVID-19 prevention and control measures, considering the worsening COVID-19 pandemic, such as the deteriorating COVID-19 situation in Europe. “For example, around 20,000 new cases have recently been confirmed per day in the United Kingdom, whereas the mainland has reported only around 85,000 cases cumulatively [since the beginning of this year],” Lei said.

Lei said on Tuesday that due to the globally serious COVID-19 pandemic, for the time being, the Macao government will not consider relaxing its existing border entry curbs, adding that Macao would in the foreseeable future keep quarantine-free travel with the mainland only, considering that the latter is the only COVID-19 low-risk area for Macao.

“The resumption of [quarantine-free] travel with the mainland is much more important than with anywhere else, as this is much more beneficial for Macao’s economic recovery,” Lei said.

Lei also said that Macao will not ease its entry curbs and quarantine measures vis-à-vis Hong Kong as the COVID-19 epidemic situation there has still not stabilised. Hong Kong is still confirming new local COVID-19 cases from unknown sources almost every day, Lei pointed out.

Lei also said that the Macao government is considering further exemptions from the current entry ban for more foreigners in special circumstances, such as those visiting family members who are Macao residents or are working in Macao, academics in local higher education institutions, or other professionals.