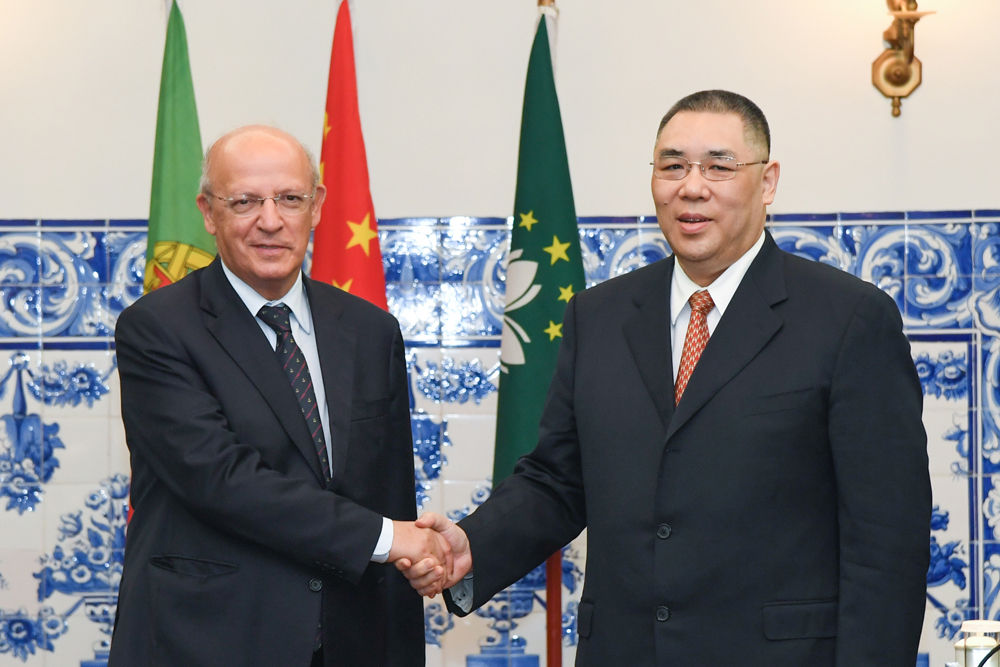 Co-chairing the meeting was the Minister of Foreign Affairs of the Portuguese Republic, Augusto Santos Silva, as part of his three-day visit to Macau.

The Chief Executive also briefed the Portuguese officials on the latest developments in Macau’s advancement, in particular how the government was integrating the city into the overall development of the People´s Republic of China.

During a meeting with the press Chui and Santos Silva talked about the future Macau-Portugal cooperation.

According to a press release from the government “On economic and trade matters, it was stated that Macau would assist Portuguese businesses interested in taking part in the development of the Guangdong-Hong Kong-Macau Greater Bay Area and the “Belt and Road” initiative.”

During the meeting It was also mentioned that Macau had been designated a “China-Portuguese-speaking Countries Young Entrepreneur and Innovation Exchange Centre”. As such, a number of young Portuguese entrepreneurs leading innovative projects would be invited to visit Macau next year, in order to share their insights.

In addition, the Macau government would encourage more young business people from Macau to explore opportunities in Portugal regarding innovation and entrepreneurship.

During Chui’s and Santos Silva’s briefing that Macau’s Talents Development Committee and the Council of Rectors of Portuguese Universities planned to sign an agreement next year, to provide scholarships to Macau students seeking to study at universities in Portugal.

Macau was as always dedicated to furthering ties between China and Portugal, and to making further contributions to the comprehensive strategic partnership of cooperation between the two countries, he added.

In the press briefing, Santos Silva said the two sides had discussed a number of topics during the Joint Committee meeting, including consumer protection and mutual recognition of academic degrees in higher education.

Friendly relations between Macau and Portugal served as an important gateway for the Portuguese business sector to enhance investment on the mainland, he said.

Closer Macau-Portugal ties not only benefited Chinese and Portuguese people, but also benefited – via Portugal as a link – people in other Portuguese-speaking countries such as Brazil, Angola, Cabo Verde, Guinea-Bissau, Mozambique, São Tomé and Príncipe, and Timor-Leste.

Santos Silva also said that China and Portugal both strove for economic development and sustainability.

“Strengthening mutual trust between the two countries would encourage further exchanges in all aspects between their people, businesses and governments.” he said.

The Minister said he looked forward to President Xi Jinping’s visit to Portugal in December.

In his concluding remarks the Chief Executive said the Joint Committee meeting had been fruitful, adding he expected the next meeting to make further advances on the topics discussed today.

Prior to the Macau-Portugal Joint Committee meeting, Chui additionally held a separate meeting with Santos Silva to exchange views on how to strengthen reciprocal relations between Macau and Portugal.

The Macau-Portugal Joint Committee was established under the Framework Agreement of Cooperation between the Macau Special Administrative Region of the People’s Republic of China and the Portuguese Republic, with the aim of strengthening cooperation between the two sides in a number of areas.

The fourth meeting of the Macau-Portugal Joint Committee was held in Portugal in September 2016.