Equatorial Guinea joins Forum Macao, whose members look to China for help in recovering from the effects of the Covid-19 pandemic. 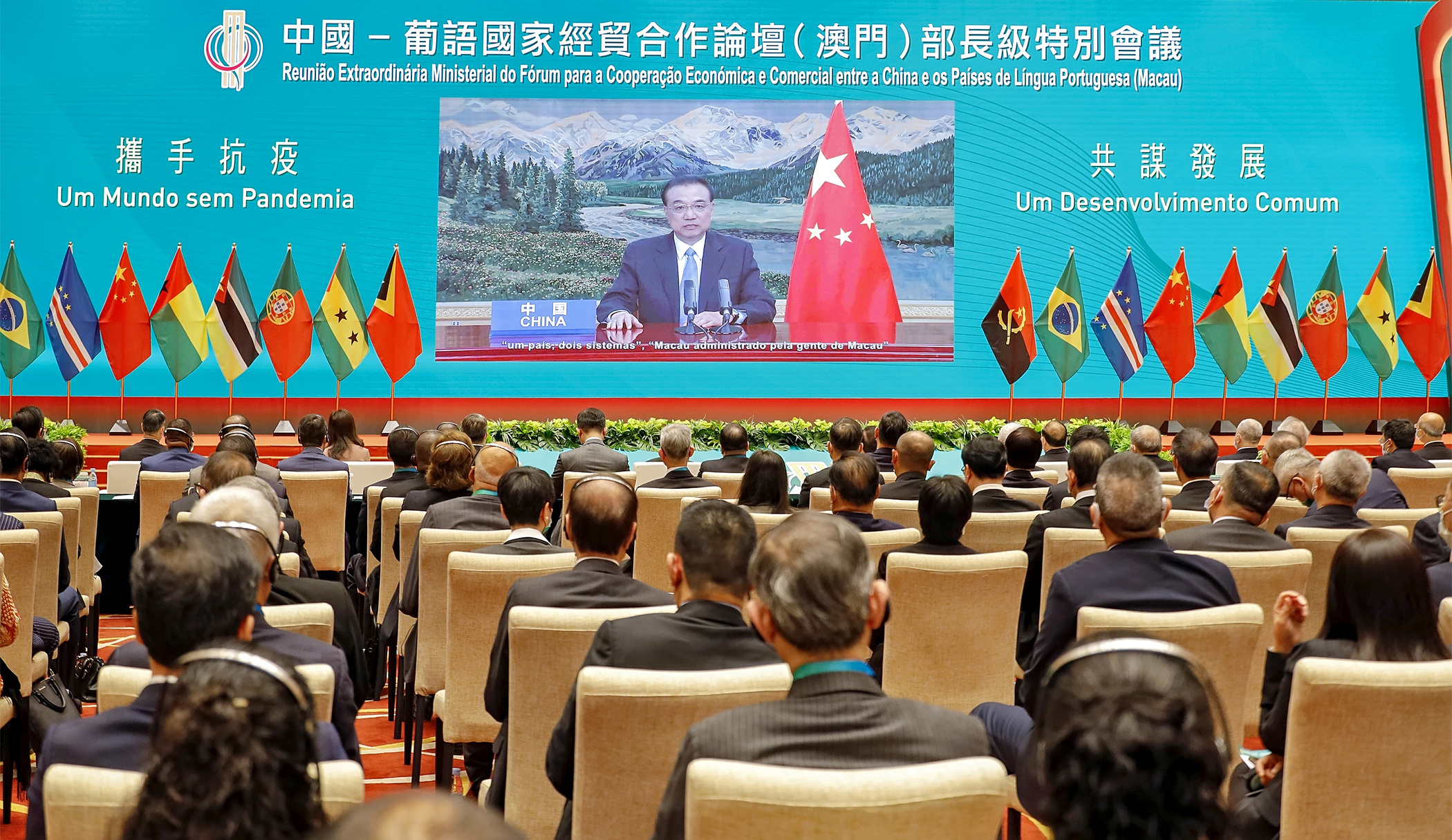 Li Keqiang was speaking via video message yesterday at the opening ceremony of a special ministerial conference of the Forum for Economic and Trade Cooperation between China and the PSCs, also known as Forum Macao.

Trade between China and the PSCs has exceeded US$100 billion for five consecutive years and reached US$200 billion in 2021, which fully demonstrated the resilience and potential of cooperation, Li noted.

Li Keqiang said that China would make more contributions to safeguarding world peace and promoting mutual development and prosperity of all countries together with the PSCs and the international society.

China is also willing to increase cooperation with PSCs in vaccines, medication and health and has set up a communication centre on epidemic prevention in Macao, said the premier.

The Centre comes under China’s Ministry of Commerce and Macao’s secretariats for Economy and Finance and Social Affairs and Culture, and will be led by the Forum Macao and Macao’s Health Bureau.

The centre, inaugurated on Sunday, is set to provide technical support for pandemic prevention and control as well as developing training programmes.

Portuguese Prime Minister, António Costa, speaking via a video message during the conference, defended the strengthening of cooperation with China and recalled that Portugal opens the door to large markets such as the European Union, Latin America and Africa, mainly due to the relationship with PSCs.

Costa remembered the diplomatic and “friendly” relations between Lisbon and Beijing, especially within the framework of Forum Macao and PSCs and said that to overcome the current socio-economic situation, due to the pandemic and the war in Ukraine, it is necessary to provide an economic stimulus and new opportunities.

The Prime Minister of Cabo Verde, Ulisses Correia da Silva, said during the conference that, “at a time of global economic contraction”, the “biggest challenge” is “overcoming the pandemic” and that joint efforts, within the framework of Forum Macao, they can be “an opportunity to attract private investment”, namely in civil construction.

Nuno Gomes Nabiam, Prime Minister of Guinea Bissau, asked China for support in the “development of productive technologies”, words echoed by the prime minister of Mozambique, Adriano Maleiane, who expressed his desire to strengthen the union and the cooperation mechanisms of the countries represented at Forum Macao.

In his speech, the Prime Minister of São Tomé and Príncipe, Jorge Bom Jesus, underlined the importance of financial support, and the need to define the priorities of Forum Macao’s future action.

The Prime Minister of Timor-Leste, Taur Matan Ruak, marked the “devastating effects of the pandemic”, but expressed the conviction that “Chinese aid” and the country’s commitment “to explore opportunities” in Beijing’s project to develop the Greater Bay Area may be a response to the international economic difficulties.

The Greater Bay Area includes Hong Kong, Macao and nine cities in Guangdong province (Dongguan, Foshan, Guangzhou, Huizhou, Jiangmen, Shenzhen, Zhaoqing, Zhongshan and Zhuhai), and has an area of 56,000 square kilometres with approximately 86 million inhabitants and a GDP of around US$1.7 billion in 2020.

Brazil vice-president, Hamilton Mourão, highlighted “the economic potential” of the PSCs, “included in different trade blocs”, with millions of consumers, coastal countries with maritime and mineral resources”  and said that it is necessary to continue to promote trade exchange and the flow of investments between Forum members.

The Minister of State for Economic Coordination of Angola, Manuel Nunes Júnior, recalled the importance of Chinese investment in his country which is developing economic measures in order “to reduce dependence on oil”.

At the end of the speeches by representatives of the PSCs, China’s Minister of Commerce, Wang Wentao, expressed the conviction that Forum Macao’s member countries “will write a new page in history”.

Macao’s Chief Executive, Ho Iat Seng, said that the Sunday meeting had created the conditions to strengthen “the promotion of cooperation between China and PSCs in the area of ​​health, economic recovery and enhancing the cohesion and influence of Forum Macao”.

At the end of the conference, representatives of the nine countries at Forum Macao approved two joint resolutions: one pointing to strengthening cooperation, and the other approving the membership of Equatorial Guinea, which has been part of the Community of Portuguese-speaking countries since 2014.

Portuguese is one of Equatorial Guinea’s three official languages, alongside Spanish and French. However, Fang, a Bantu language, is the former Spanish colony’s main language, spoken by some 85 per cent of its 1.5 million inhabitants.

Equatorial Guinea gained independence from Spain in 1968, and as a major oil exporter is one of Africa’s richest countries.

The Forum Macao dates back to 2003, when China determined that Macao would become a platform for economic and trade cooperation with PSCs.