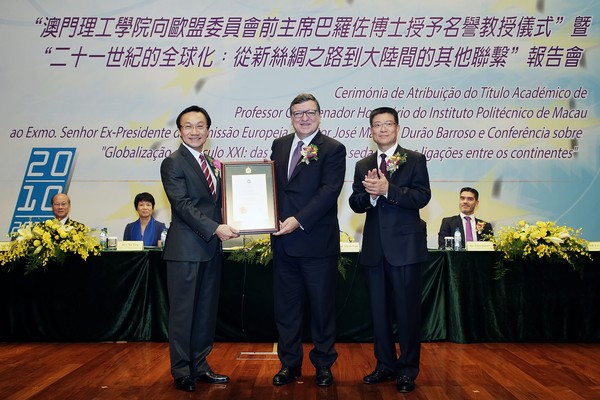 The New Silk Road will increase the commercial ties between China and other parts of the world bringing many opportunities to Macau said former President of the European Commission José Manuel Barroso, who received Tuesday an honorary professorship from Macau Polytech Institute (IPM).

The former Portuguese Prime Minister also commented on the economy of Macau and the role the territory play as platform for the relations with the portuguese speaking countries and China.

“The strategic choice of making Macau a centre of excellence for tourism and leisure activities, and the opportunity from a cultural point of view of creating a platform with
countries that speak Portuguese, it’s a good choice. It seems to me that it’s already bearing some concrete fruits”, he said.

“Today, Macau is much more developed on the economic side. The region is very stable and is keeping with pride its Portuguese heritage. I met the Chief Executive and he told me about the work developed and how the Portuguese heritage is seen as a way of promoting the unique characteristics of the territory. Macau is on the right path’, he said.