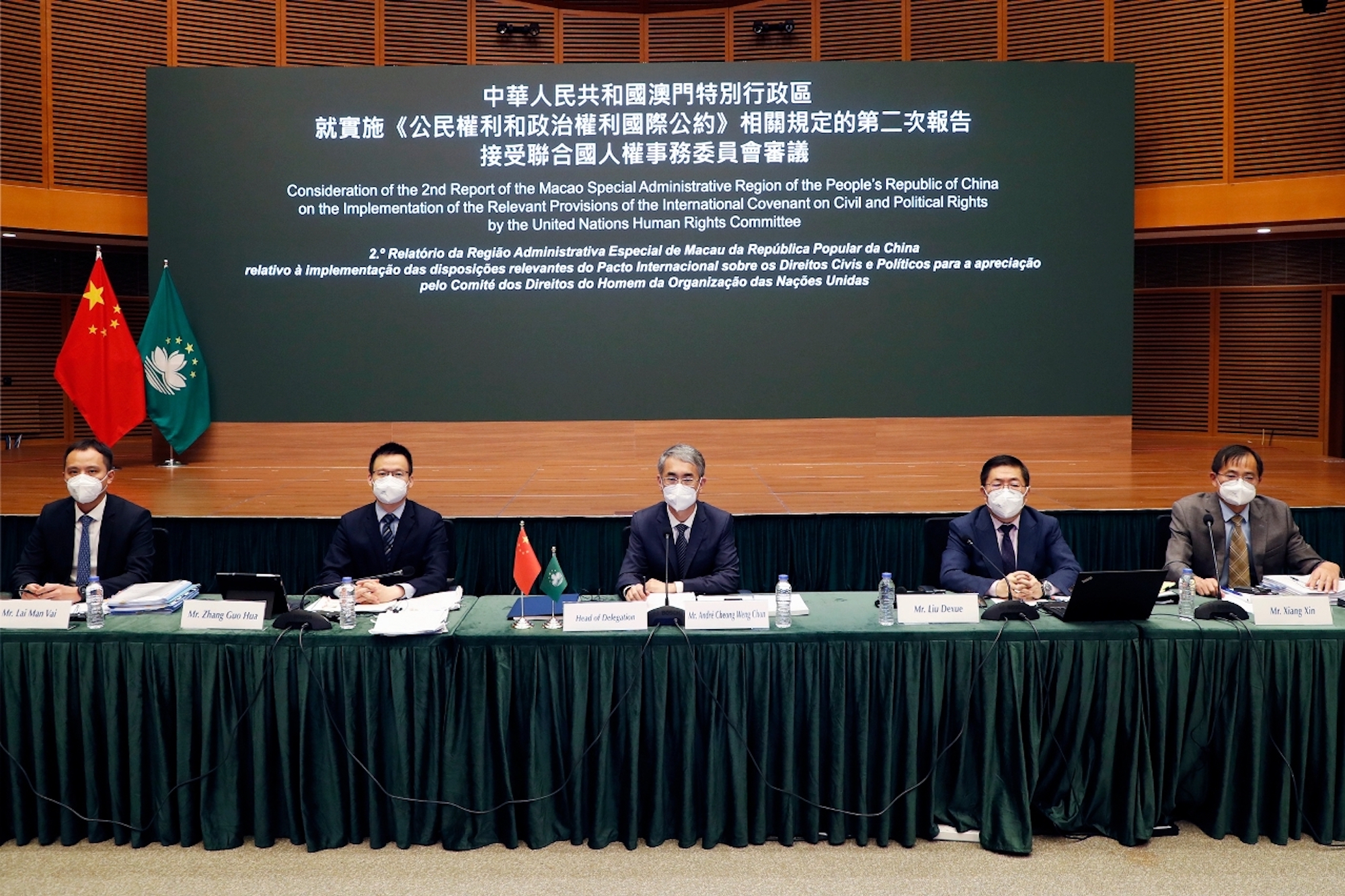 The government of the Macao Special Administrative Region (MSAR) is committed to implementing the “relevant provisions” of the International Covenant on Civil and Political Rights, the Office of Secretary for Administration and Justice André Cheong Weng Chon has announced.

Between 13-15 July, the second report of the MSAR government on the implementation of the relevant provisions of the covenant was considered by the United Nations Human Rights Committee in Geneva. Macao’s delegation briefed the committee on the implementation and responded to its questions.

The committee issued its Concluding Observations on the report on the MSAR’s implementation of the relevant provisions of the covenant yesterday, expressing its appreciation for the constructive dialogue with Macao’s delegation, thanking the local government for its written and oral replies, as well as the supplementary information provided to the committee.

The committee welcomed the legislative and policy measures adopted by the local government in relevant areas, including the formulation of the Law on Preventing and Combating Domestic Violence and the Law on Employees’ Minimum Wage, as well as the amendments to the Penal Code and the Labour Relations Law to make child pornography an offence and expand the scope of crimes related to child prostitution, and increase the number of days for maternity leave and establish paternity leave.

At the same time, the committee expressed its views and recommendations in its Concluding Observations on issues such as the interpretation of the Macao Basic Law, the crime of insulting national symbols and representations, universal suffrage, judicial independence, combating trafficking in persons, protection of privacy, freedom of speech, peaceful assembly and freedom of association.

Cheong commented that the MSAR government could not agree with some of the contents and expressed its opposition. The local government, believes that, as a human rights treaty body, it would be appropriate for the committee to uphold the objective of having a constructive dialogue with the party under consideration, avoid “politicising” its considerations and refrain from making biased and inaccurate conclusions on the basis of unsubstantiated reports or information sources.

Pursuant to Article 143 of the Macao Basic Law, the power of interpretation of the Basic Law shall be vested in the Standing Committee of the National People’s Congress (NPC) in Beijing.

The Office of André Cheong said that “the exercise of the power of interpretation by the NPC Standing Committee does not impair the MSAR’s judicial independence.”

In 2011, the NPC Standing Committee interpreted Annex I and Annex II of the Macao Basic Law, expressly clarifying the necessary procedures for the revision of the methods for electing the chief executive and for forming the Legislative Assembly (AL). The so-called “concerns” raised by the committee were due to the lack of understanding of the interpretation system of the Macao Basic Law, the Office continued.

As a local administrative region directly under the Central People’s Government of the People’s Republic of China (PRC), the MSAR “strictly protects national symbols and representations in accordance with the provisions of the Macao Basic Law”, adding that this “is an obligation that should and must be complied with and should not be reproached”.

It “is obviously unreasonable for the committee to ask the MSAR to consider “decriminalising” acts of insulting the national flag, emblem and anthem, stressed the Office of André Cheong.

Since the establishment of the MSAR on 20 December 1999, the development of democracy has been promoted in accordance with the law. “The democratic factors of the methods for electing the chief executive and for forming the Legislative Assembly have been continuously enriched and the electoral system has been increasingly improved,”, adding that the future political development of the MSAR will be steadily promoted in accordance with the Macao Basic Law and the relevant interpretations and decisions of the NPC Standing Committee, “proceeding from the actual situation of the MSAR itself, on the basis of obtaining a broad social consensus.”

When the Central People’s Government presented a note to the depositary of the covenant concerning the continuous application of the covenant to the MSAR in December 1999, it had made a reservation to its Article 25(b), relating to the issue of universal suffrage.

Therefore, the committee’s request for the MSAR to comply with the relevant legal obligations, “which it is not legally bound by and does not have to assume, is not in line with the relevant principles of international law.”

Cheong emphasised that the MSAR government attaches great importance to the committee’s Concluding Observations. “Concerning some of the constructive recommendations put forward, the MSAR government will duly consider them and follow up appropriately in the future”.

The MSAR government “will, as always, continue to take various measures to protect human rights, strive to implement the relevant provisions of the covenant in accordance with the Macao Basic Law and carry out the spirit advocated by the covenant,” The Macau Post Daily reported.