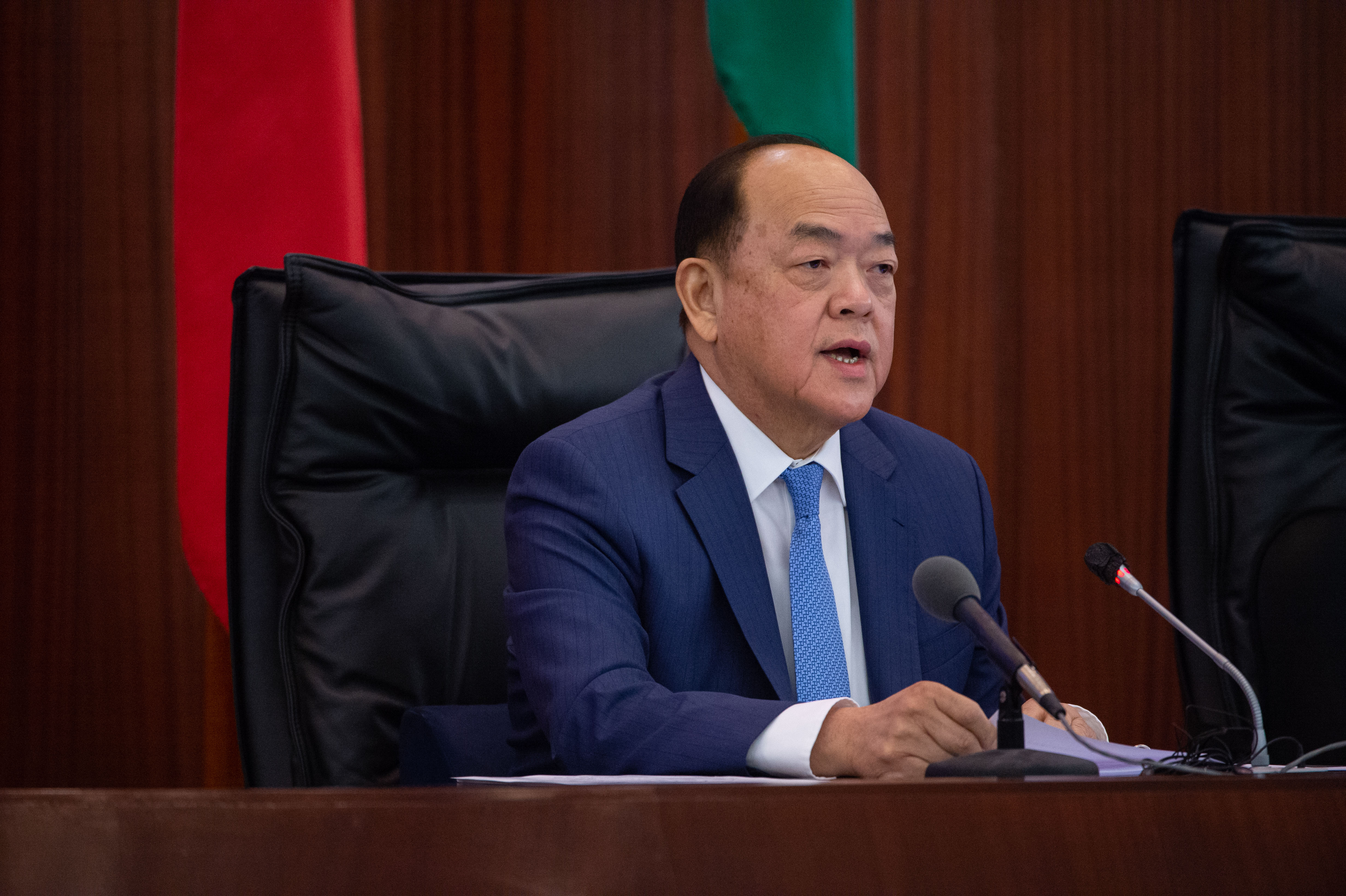 Chief Executive Ho Iat Seng pledged on Monday to set up a mechanism to normalise the government’s Covid-19 prevention and control measures and to speed up the city’s economic recovery at the same time.

Ho made the pledge in his 2021 Policy Address that he delivered in the hemicycle of the Legislative Assembly (AL) Monday afternoon. The chief executive, who has been at the helm of the local government since 20 December last year, stressed at the start of his 90-minute address that the “protection of residents’ lives and health” continues to be his government’s top priority. He also underlined the “strong support” that the central government has been providing Macao. Ho said that Macao has “profoundly learnt from and followed the spirit of the important speeches delivered by President Xi Jinping during his visit to Macao in December last year.”

In one of his speeches, Xi urged the Macao Special Administrative Region (MSAR) to always “put the people first and better safeguard and improve their well-being.”

Ho, a former president of the local legislature and ex-member of the Standing Committee of the National People’s Congress (NPC), acknowledged that due to the Covid-19 pandemic 2020 “is an extremely difficult and unusual year” that has turned out to be an “unprecedented and severe test for everyone.”

Ho, a former business community leader, also admitted that due to the novel coronavirus crisis Macao is going through “grave recession” and the receipts of the tourism and gaming sectors have “fallen steeply”, while other sectors have also been deeply impacted.

“Small, medium-sized and big enterprises have all been confronted with different kinds of difficulties and challenges,” Ho said, adding that the government’s receipts have “drastically fallen” and residents have been facing immense pressure as far as their jobs and lives are concerned.

Ho also said that Macao’s accomplishments in the fight against Covid-19 “have not come easily”.

On the anti-Covid-19 front, Ho said that prevention of imported cases and of a rebound of the epidemic in Macao continued to be his government’s priority in tackling the highly infectious disease. Ho also said that the government would further strengthen regional joint prevention and control efforts, expedite vaccine supplies and prepare for the setting-up of a mobile hospital.

On the economic front, Ho said the government would actively participate in the central government’s dual circulation strategy that stresses both domestic and external factors in fostering the nation’s economic growth. He also said that the government would further increase the number of public infrastructure investment projects, such as the construction of a fourth link between Taipa and the peninsula.

Ho also underlined the importance of ensuring the local economy’s “adequate economic diversification” such as by speeding up the development of a modern financial services industry, the establishment of a bond market, further growth in the traditional Chinese medicine (TCM) industry, and promotion of Macao as a safe tourist destination, based on the concept of “smart tourism” and tourism service excellence.

The 63-year-old chief executive also promised that the government’s austerity measures won’t impact its expenditure on social welfare measures, such as the continuation of its annual “wealth-sharing” handout of MOP 10,000 for permanent and MOP 6,000 for non-permanent residents.

Ho expressed some frustration at the sluggish pace of public administration reform and stressed the urgent need to deepen the reform effort. He noted that his government would accelerate the development of digital governance.

The chief executive said that patriotic education and national security education needed to be further strengthened. He also announced steps to improve Macao’s national security laws and regulations and the enactment of specific legislation to protect the MSAR’s official secrets.

“We must take efficient measures to prevent the infiltration and intervention by external forces,” said Ho, who also underlined his government’s determination to fight corruption.