Macau’s incoming chief executive has pledged to unite Macau society and lead Macau to participate in the nation’s development. 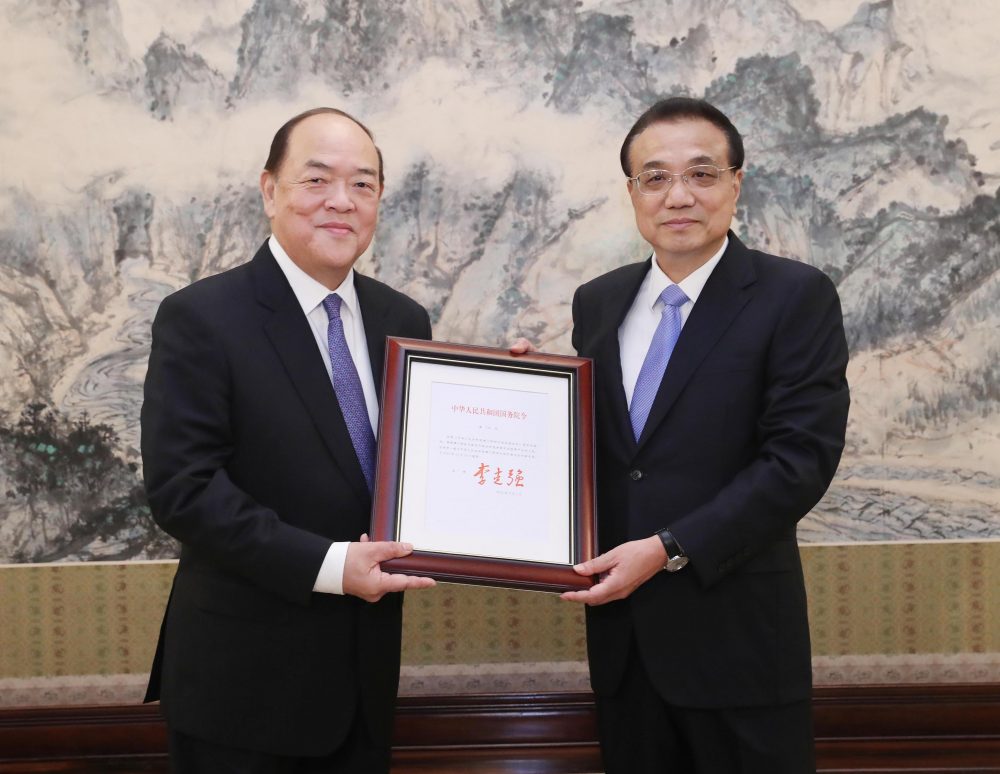 Ho made the remarks in an interview with Xinhua after he was appointed as the fifth- term chief executive of the Macau Special Administrative Region (MSAR) by the State Council on September 4.

Ho won the chief executive election with 392 of 400 valid votes on August 25 and will assume office on December 20.

In the interview, Ho stressed that he will strictly implement the Basic Law of MSAR and ensure that the “One Country, Two Systems” principle does not become distorted in Macau.

Being elected chief executive is a great responsibility for him, he said, and he is determined and confident about implementing the principles of “One Country, Two Systems,” “Macau people governing Macau” and a high degree of autonomy, he said.

He will unite all sectors of Macau society, lead the new MSAR government in governing the region in accordance with the law, carry out various tasks, and actively integrate Macau into the national development, he added.

Ho noted that over the past 20 years since Macau’s return to the motherland, the principle of “One Country, Two Systems” has been firmly implemented, and the legislature has successively enacted Article 23 of the Basic Law, and amended the laws on the national flag, the national emblem and the national anthem.

He mentioned that in January 2019 when he was the president of Macau’s legislature, the legislature passed the Bill on the Use and Protection of the National Flag, National Emblem and National Anthem.

“I’m very honoured that when I resigned from my post as chairman of MSAR legislature, I took a deep bow to the national flag, the national emblem, and the flag and emblem of the MSAR which were hung on the hall of legislature’s chamber,” Ho said.

“The law is very clear, we can’t go beyond the framework stipulated by the law. The local laws of Macau must abide by the framework of the Basic Law,” said Ho, who was also a member of the Standing Committee of the National People’s Congress (NPC).

“Although I am not a law student, the idea of law has been inscribed on my mind through 20 years of working experience in Macau’s legislature and the Standing Committee of the NPC. You have to understand the law before everything, that is my way of doing work,” Ho said.

Macau’s economy relies mainly on the gaming industry, and the central government and MSAR government have actively promoted a moderately diversified economy in recent years.

To achieve the goal, Ho said, the technological industrial development targeting the Chinese mainland market is a key task for the new MSAR government.

Ho said Macau should make full use of its university resources and transform them into industries with high-tech products, such as 5G telecommunication and other emerging industries.

Ho had a long experience in Macau’s manufacturing industry and once served as vice president of the Macau Chamber of Commerce (ACM). He has a deep understanding of Macau’s economy.

It won’t be easy to cultivate industries in Macau where the median monthly salary ranges from 18,000 patacas to 22,000 patacas. Ho told Xinhua.

Ho pointed out that Macau also faces competition from Southeast Asia, and lacks the competitiveness to develop labor-intensive industries. Since the central government asked Macau to pursue the moderate diversification of its economy, the MSAR government needs to think carefully about what industries Macau should develop in future.

Ho took generic drug production as an example, pointing out that if the central government offers Macau supportive policies, Macau could use its connections with the European Union to attract advanced equipment and talents from abroad, manufacture generic drugs in Macau and then sell them to the huge mainland market.

Ho said Macau should get prepared before cooperating with other cities in the Guangdong-Hong Kong-Macau Greater Bay Area (GBA).

The Outline Development Plan for the GBA which was issued this year has defined Macau as one of the four central cities in the GBA. Ho said he believed that Macau’s position is very clear, which is “one center, one platform, one base.”

“Macau’s over 400-year history of cultural exchanges between China and the West has left behind many kinds of precious heritage, such as the first [Western-style] lighthouse and the first university in the Far East, which have not been well-developed for now. That is Macau’s unique position in the GBA,” Ho said.

He also reiterated the importance of cultural heritage in Macau, such as historical than the original one, but that is not the history,” Ho said.

The development of the traditional Chinese medicine (TCM) industry and cultural exchange base in Macau can also gradually help the tourism industry development in the neighbouring cities of Zhongshan and Zhuhai, Ho added.

After each city in the GBA finds its role and position in the area’s overall development plan, cities can cooperate with each other. For example, Macau and Hengqin island of Zhuhai can work together to take advantage of their advantageous conditions, Ho said.

In his political platform issued during his election campaign, Ho had put forward his plan for five sectors, namely public governance, diversified economy, people’s livelihoods, youth development and cultural cooperation. People’s livelihoods is a part which Ho is most concerned about.

Ho said, at present, the MSAR government has invested quite a lot of resources and the issue is not whether the input is enough, but whether those resources are put into the right place efficiently.

He mentioned that Macau’s land resources are limited, and housing is a difficult issue for young people and “sandwich class,” who are neither eligible to apply for public rental housing nor able to afford private housing. Most of them can only ask their parents for help.

“If this issue can be solved, young people can afford their homes and old people can enjoy their retired life. This is not only about housing, but also about whether the people are satisfied and happy, about how well they are living,” Ho said.

Talking about urban renewal, one of the most concerned issues in Macau, Ho said it was his “biggest challenge.”

“But if we take the first step in the right direction, I believe we can do the job,” Ho said, adding that if the government set good examples in urban renewal, the community will understand and cooperate.

Talking about education and the future development of young people in Macau, Ho said that most schools in Macau have implemented the education policy of loving the country and loving Macau, including the schools run by the local Catholic diocese.

Macau’s young people have a wide range of options after graduating from secondary school, either they enrol in universities on the mainland or they stay in Macau, he added.

However, many young people can only choose to work in the gaming industry after graduation due to limited range of industries in Macau so the SAR government should give more guidance on youth employment, and different industries should coordinate with universities to provide more suitable courses for young people and more employment opportunities after graduation, he said.

Loving the country and loving Macau has always been the core value of Macau’s society, which has also been deeply rooted in education at all stages in Macau. Ho said that some education representatives have suggested that there should be a patriotic education base in Macau such as a permanent exhibition venue to show the nation’s historical development since the modern era.

“I think it is a good idea, just as Macau holds a national security education exhibition every year, there should be a regular exhibition about our history,” he said.

Ho said that only using textbooks to teach young people about what the country has gone through is not enough. He suggested that young people should watch more relevant historical films from the mainland to know more about the country’s history.

He also said that a visit to such an exhibition venue could be a compulsory class for Macau’s students, allowing them to know more about the national conditions and understand the hard-won achievements of the country’s development.

From Legislator to Chief Executive

Ho’s long experience as a deputy of the NPC and a member of the NPC Standing Committee, as well as his two terms as president of the MSAR Legislative Assembly, has given him a deep understanding both about the country and Macau.

Ho said he has been deeply inspired by the views of his colleagues on the NPC Standing Committee from many different perspectives on the country’s reform and opening-up, the legal system and national policies.

Ho, who was a member of the NPC Standing Committee for nearly 20 years, has witnessed the enactment, revision and drafting of many laws. The 20 years have been a period of high-level building-up of the legal system, and great importance has been attached to the work of ruling the country according to the law, he said.

Referring to his ongoing transition from legislature to chief executive, he underlined he is no stranger to government work, as he served as a member of the Executive Council of Macau and was involved in government- related work.

Through his 10 years’ experience in the Legislative Assembly, he has been able to think closely about people’s needs. In future, when he will work as head of the MSAR government, he will remind himself whether the policies are close to people’s needs or not, Ho said.

“For example, in the long run, the policy is good, but the public does not understand it for the time being. If you can explain and make it clear, the public may not worry about it very much,” he said.

“According to my 10 years of experience in the Legislative Assembly, close communication is what our executive authorities need to do,” he said.