60 years in journalism have taught José Rocha Diniz a thing or two about the business. The publisher of Jornal Tribuna de Macau wouldn’t swap it for the world. 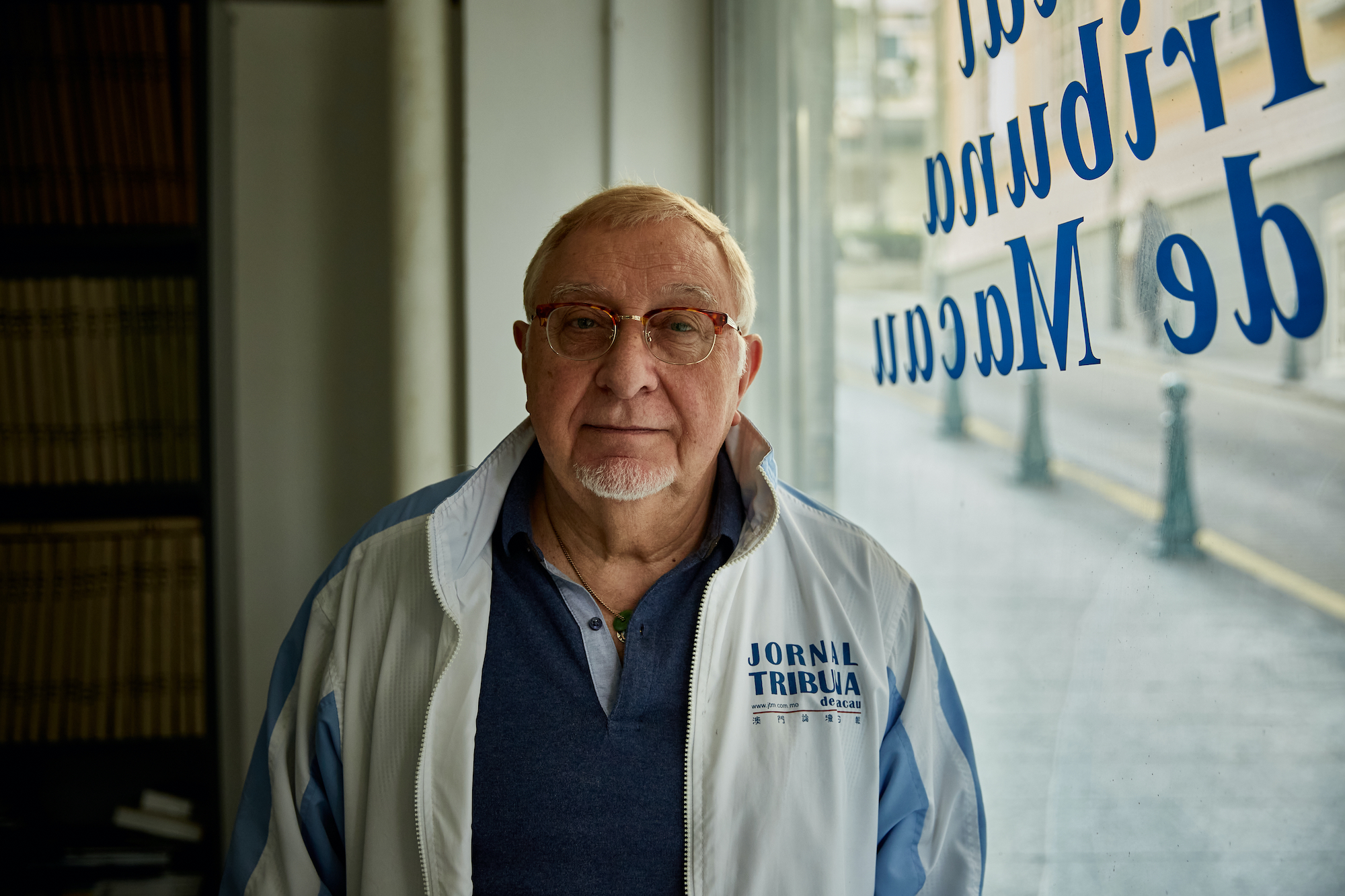 The first time José Firmino da Rocha Diniz stepped foot into a newsroom, he knew he had found his calling. Just 17 years old, the Portuguese native was hired as a sportswriter by Centro Desportivo in Coimbra, central Portugal’s medieval capital.

“I had four different editors. One day, they had a disagreement and just left me to work on the newspaper by myself,” recalls Rocha Diniz, who is now the publisher of the Journal Tribuna de Macau. “I was only 17 or 18 then, but it was a great time. Being fully responsible for the paper taught me a lot.”

Not only did he learn how to write, but he also began to tackle the process of making a print newspaper. “Back then, we didn’t have computers. We had the printing press, and the linotypists had to put the newspaper together, line by line,” he recalls. “The headlines were done letter by letter, so it required a great mental gymnast. Understanding how everything worked helped for the rest of my life.”

In February 1946, Rocha Diniz was born in the town of São Pedro do Sul, in central Portugal, but he never lived there. His father moved the family back to his hometown, in the coastal area of Mira, where Rocha Diniz spent his childhood studying and playing beach sports. For his university years, Rocha Diniz moved to Coimbra to study law and history at the University of Coimbra while dipping a toe in the news world.

The young reporter worked at a few small, local newspapers, covering anything from politics to sports. Then, in the 1960s, Portugal began to question the country’s authoritarian Estado Novo regime. The students began protests in 1962, and by 1969, a major movement shook the University of Coimbra.

“At the time, the government would force students who protested to go into military service [during the Portuguese Colonial War], first to Mafra [on the west coast of Portugal] and then Guinea-Bissau [in West Africa],” Rocha Diniz explains. “Because of my deep involvement in the ‘69 movement, where the students boycotted examinations, I tried to bypass the government draft by moving to Angola [a Portuguese colony at the time] in 1970 to teach history and Portuguese at the Lyceum and Preparatory School of Carmona [in northwestern Angola].” 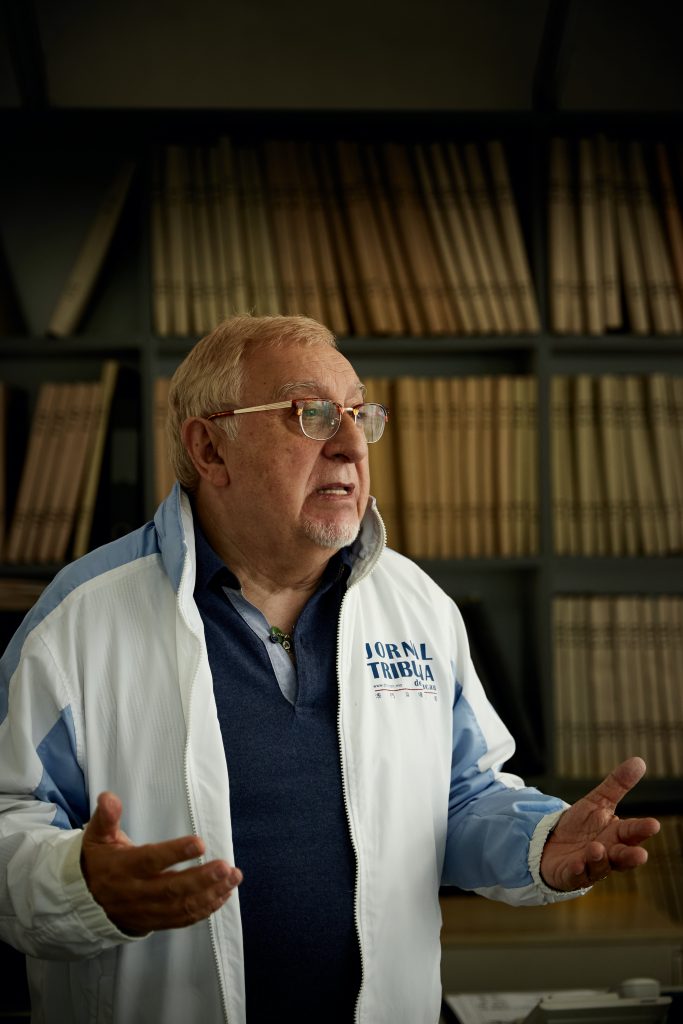 He taught in Angola for three years and stayed busy with side projects: Rocha Diniz founded a weekly publication, Ecos do Norte, to cover general news; got involved with news radio programmes; and coached two soccer teams. Then, in 1973, the government called on him to join the army, sending the 27-year-old to Huambo (then Nova Lisboa), Angola.

“Six months later, I became an officer, and then the Carnation Revolution [a military coup which overthrew the Estado Novo regime] happened on 25 April [1974 in Lisbon],” he recalls. “I was very happy with the fall of the regime. But in strict professional terms, it was more complicated. Month by month, the cities started fighting politically, which in those circumstances, meant a lot of violence.”

Though challenging, military service did not sideline his journalism career. While serving, he collaborated with Radio Clube do Huambo and the Official Broadcaster of Angola for roughly two years. In 1975, his service ended and he was able to return to Coimbra to finish his Economic and Social Modern History degree and work as a reporter at the local branch of Diário de Notícias (The Daily News), one of the country’s largest newspapers at the time.

After finishing his degree, the ambitious journalist requested a transfer to Lisbon where he began working as a reporter. Eventually, he was promoted to general editor, then became one of Diário de Notícias’ National Politics editors.

“I was able to cover different roles because of my earlier experience,” he says. “I understood how newspapers worked and I had a good sense of the space, the length, how things would fit. I knew what could go where, what would fit in which column.”

After about two years with Diário de Notícias, in 1980, he sought out new challenges. He took the role of deputy editor at a weekly newspaper called Tempo, where he had the opportunity to work in radio and television. “I wanted to see different styles, different types of work,” he says. “The appetite to learn more is the way I live my life. It is not only journalism. It is everything in life – I try to keep my mind open, my eyes wide, and stay curious.”

“My philosophy is that, if I don’t know, then I need to know.”

In July 1982, a former colleague invited him to visit Macao to cover a story about the tourism industry for a weekly television programme aired on RTP (Rádio e Televisão de Portugal) – a public broadcasting service in Portugal. “On that first trip, I visited for one week. Apart from filming, I tried to talk with major players about their visions for Macao,” he recalls. “When I got back to Lisbon, I was really happy with the recordings, as Macao is a very photogenic place. But I felt that Macao was also quite hard to understand. I soon forgot about Macao in my daily life, never thinking I would return.”

Little did he know, he’d be relocating permanently just two months later in October of 1982. In the leadup, Jorge Neto Valente, the co-founder of Macao’s Democratic Centre (Centro Democrático de Macau) who is now the president of the Macau Law Society, asked Rocha Diniz to move to Macao and start a weekly newspaper in the city: Tribuna de Macau. “I actually hadn’t met Neto Valente on my initial visit, despite my attempts [to interview him],” recalls Rocha Diniz. “But he asked me out for lunch, and, after some convincing, I asked myself: ‘Macao? Why not?’”

Almost in his 40s, Rocha Diniz was hungry for new challenges. In the early 1990s, he started teaching journalism classes at the University of Macau; took on a role as the deputy director of the Faculty of Social and Human Sciences; later launched an educational Portuguese-language TV programme for Macau Educational Television – all while running the weekly paper.

In July 1998, Rocha Diniz seized the chance to merge with the evening Jornal de Macau and relaunched the publication as the Jornal Tribuna de Macau. “By the time of the 1999 handover [from Portuguese to Chinese administration], Macao had become so lively and busy – there was too much news to report, so we became a daily publication,” he recalls.

One day, Neto Valente told him: “By the way, I put all the Tribuna shares in your name”. To which Rocha Diniz replied: “That is OK; it only increases my responsibility.”

Throughout the years, Rocha Diniz has covered everything from sports to tourism, and major historic moments in Asia.  “As a journalist, I have done so many things – it is not fair to choose just one thing. I have covered all the major events in Asia, the elections and other political and social events in Japan, in the Philippines, in South Korea, Indonesia, Malaysia, the coups in Thailand… the list goes on.”

His contribution to Macao’s media, culture and education has been recognised at the highest levels. In 1997, the Macao government awarded Rocha Diniz the Medal of Merit and, two years later in 1999, the President of the Portuguese Republic Jorge Sampaio awarded him the Order of Grand Officer of Merit for his contributions to society.

Although it wasn’t always smooth sailing. When late Admiral Vasco Fernando Leote de Almeida e Costa was the governor of Macao in the early 1980s, Rocha Diniz remembers the Tribuna receiving 18 legal complaints. “This period of political life in the territory reinforced my friendship with lawyer Neto Valente, because we both had to fight Costa’s government,” Rocha Diniz says of those “funny times”.

After Mário Soares’s presidency in Portugal, from 1986 to 1996, the governors in Macao became more democratic, he recalls. It was during this time that he was invited to become the deputy director of Macau Television (TDM).

“It was interesting to work for TDM, but Tribuna was never out of my sight,” says Rocha Diniz. He later left TDM but continued to be in charge of a weekly debate programme for many years. In the 90s, Rocha Diniz was also a member of the Education Council and the commission that was in charge of implementing Macao’s official languages.

Since Rocha Diniz moved to Macao decades ago, he says many things have changed. “The physical nature of Macao has changed. The mentality of Macao has also changed. In general, people are very interested in heritage, social welfare, meaning the public environment,” he says.

But some things remain the same. “People coexist, from all different places and backgrounds. I am really proud of this aspect of Macao,” he reflects. “Of course, the city has problems, just like anywhere, but I feel great love from everybody, even the critics.”

It’s been 38 years since Rocha Diniz launched the Tribuna de Macau (now the Jornal Tribuna de Macau) in Macao. The seasoned journalist continues to report, edit and manage his team nearly every day while setting the stage for the publication’s future.

“I am 74 now,” he says. “So I am preparing [for the years ahead]. I have asked one of my colleagues, some of whom I have worked with for 17 years, to take over as a director. Now I’m the publisher, but when I stop working, Sérgio Terra will be the owner of the newspaper.”

In his free time, you can most likely find Rocha Diniz enjoying family time with his wife and nine-month-old daughter or getting lost in the pages of a book. His home and office are packed with stacks and stacks of books – particularly on history and politics and law – which he consumes at a rapid pace. “Knowledge is never enough,” he says, of his insatiable appetite for learning.