Janet McNab learned the value of grit and a solid work ethic at an early age. As multi-property Vice President of the Sheraton Grand Macao Hotel and The St. Regis Macao, she’s now blazing a path for women in her industry. 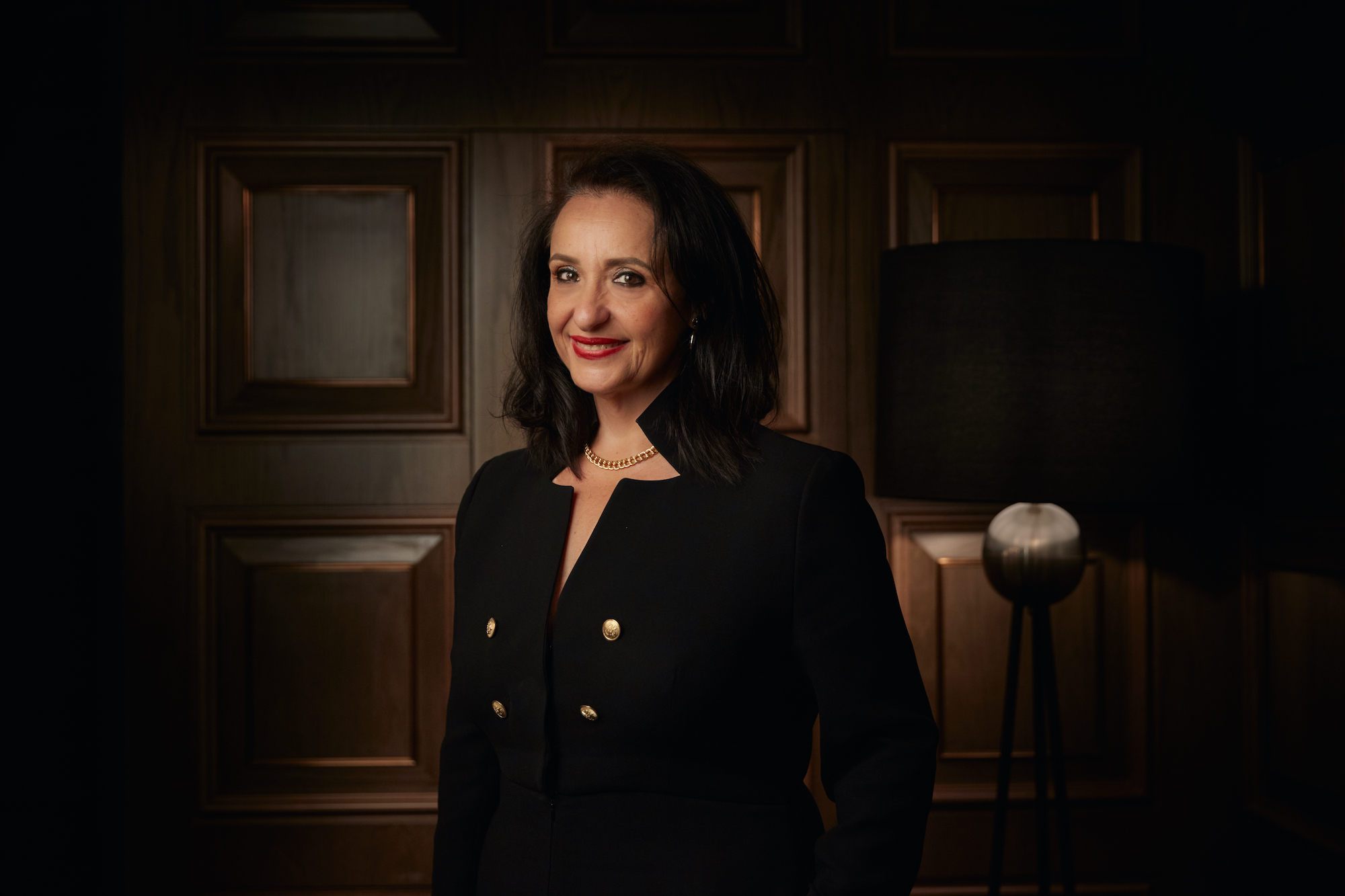 As multi-property vice president of the Sheraton Grand Macao Hotel and The St. Regis Macao, Janet McNab is responsible for more than 4,000 rooms and 1,500 employees. She has advanced her career in an industry that, until recently, women were overwhelmingly outnumbered in management ranks.

And now, as hotels everywhere face unprecedented challenges under the pall of Covid-19, McNab, 56, draws from decades of experience and grit to weather the storm.

She owes her experience to Starwood, where she has worked in more than eight postings in as many cities over the past two decades. But she owes that grit to her parents.

“My parents grew up in a small village in southern Italy, and emigrated to Australia in the 1950s,” McNab says.

In their early twenties, they were part of a wave of migration of Southern Europeans fleeing the devastation of World War II for the promise of a better life in Australia.

“They arrived with almost nothing in a faraway land where they didn’t speak the language and knew little of the culture, but they worked extremely hard to give us better opportunities,” says McNab with evident pride.

Her father took the only work he could find, cutting sugarcane: “And,” says McNab, “that hard work ethic and determination to succeed has been passed on to me.”

McNab not only inherited her parents’ grit, but their pragmatism, too. Describing somebody as practical may not sound like praise. Practical people play it safe. They stay, as stereotypes go, within bounds, enjoy well-worn routines and leave the risk-taking to the foolhardy and frivolous.

So, what then to make of Janet McNab? A woman who has parlayed fierce dedication to practicality and strategic thinking into a life of globetrotting, professional success and personal fulfillment.

Ask her what she wanted to be growing up, and McNab won’t say astronaut or ballerina, but a courtroom reporter, because: “You could build quite a career on it.”

Instead, in 1980 she forwent university to work in a local law office as a paralegal – even that was a challenge for her parents, who would have preferred she get married and get a reliable job in government.

She soon found her office job too boring to bear. “I needed to keep pushing that envelope,” she says.

Finding a home in hospitality

Though McNab had ruled out mundane office life, she still wasn’t sure what she wanted to do. She made an asset of her indecision and cast a wide net, ready to go wherever the future took her.

“I thought of everything I would like to do, and just applied to about 40 different organisations.”

This led to an interview with the Sheraton Brisbane Hotel and Towers where she was hired for a job in administration as the hotel’s convention and service assistant in 1988. Sheraton was quick to realise McNab’s potential and, within six months of starting, the company moved her to sales where she worked in a number of roles in sales and catering operations ultimately ending up as the director of sales and marketing – a role she relishes to this day.

The hotel industry was different then, no one discussed the budgets and a hard-sell might mean taking someone out to tea. Looking back, she remembers her first months on the job as mostly a procession of parties.

While more fun than being a paralegal, her role as director started giving her the same restless feeling. Except this time, it was Australia itself that felt too confining.

“It just wasn’t big enough for me,” McNab remembers. “Australia is a totally domestic market, whereas here,” she says of her new home in Macao, “it’s totally international.”

McNab has never been the type to shy away from hard work. While climbing the corporate ladder in Brisbane, she decided it was time to also go back to school. In 2001, she earned an MBA from the Queensland University of Technology with degrees in strategic management and new venture marketing, all while working full-time at the Sheraton Brisbane.

Her academic experience, McNab remembers, instilled a new sense of confidence and a clear professional framework. Going forward, she set her sights on two things: getting out of Australia and becoming a hotel general manager.

Setting off and seeing the world

Even then her desire to travel wasn’t driven by a youthful longing for adventure. Instead, she says all along she was “seeking career growth and opportunity.”

When a position opened up in 2002 at the Sheraton Nanjing Kingsley Hotel & Towers, she jumped at it, despite having no experience in China.

She found herself in a foreign city with a massive job to do. “The role was very broad: I was responsible for developing the strategic direction for the property, building the local profile of the property, lifting the expertise of the sales team’s skills, and directing and managing the hotel advertising strategy.”

On top of professional challenges, were the equally daunting personal adjustments.

“It was a big culture shock,” says McNab. “I don’t speak Mandarin so communicating was hard, and I lived at the hotel.”

Still she thinks mostly of that time as an adventure, and as an important launchpad for her career. “I did learn a lot,” she says, “and these experiences help you grow professionally and personally.”

Her ambition made an impression, and her boss in Nanjing enrolled her in an in-house programme called the “General Manager High Potential Track.”

She was in the programme’s first class intake, and its only female participant: “First female, first batch,” she likes to say.

Whether she knew it at the time, McNab was about to start a long career of globetrotting. Today, she refers to herself as “a nomad,” but unlike many people who join up with the hotel industry, her goal was never just to see the world.

“It’s about the job, not the place,” says McNab, with a single-mindedness and commitment to her career that have defined her professional life. “I’ve always taken on jobs for the role itself and the opportunity for growth.”

At times, she would even take positions that would seem like a step down, as long as they furthered her longer-term goals and improved her CV. For instance, when she took the job as the pre-opening general manager of Four Points by Sheraton in Bangkok, many of her peers called her in confusion, seeing the Four Points as a step down from the Le Méridien Bali Jimbaran and a 5-star brand where she had worked prior.

That’s not how she viewed it. All McNab saw was the chance to put the experience of opening a hotel in a new region on her resume. “Sometimes you move down, sometimes you move sideways. You just need to move.”

But her time in Nanjing was certainly a move upwards. Nanjing not only represented the first big step in her career, but also a watershed moment for her personal life. After all, it was in Nanjing that she met her husband.

The fast-track general manager programme turned out to be just that, and in less than three years, McNab became the marketing director for Starwood across Indonesia. And in less than a year, she moved to Malaysia, directing sales and marketing for Southeast Asia. The role covered Indonesia, Malaysia, the Philippines and Brunei – and she oversaw 22 separate properties.

After two stints in Thailand – including the Four Points job – she accepted her current job in Macao in 2015.

Macao is smaller geographically than McNab’s previous domains, but the job is enormous. As the multi-property vice president, a role she started in 2019, she oversees two distinct properties – Sheraton Grand Macao Hotel and The St. Regis Macao, and in 2018, McNab was on hand to greet the Sheraton Grand Macao’s 10 millionth guest. “No two days are the same,” says McNab. “What I love both about this role is just how dynamic it is.”

Still, she knows that many people probably hear stereotypes about what it means to work in hotels. “People are beguiled by the luxury,” she says gesturing around her, “by the fact they see so much marble.”

“But what I do is much more financially focused. From where I sit, I have a responsibility for good governance, for compliance, for financial performance. People probably don’t see that so much.”

Perhaps, but she has faced challenges in her career that your average compliance officer couldn’t imagine: riots, coups and terrorist attacks.

“I was in a regional role in Bali during a series of terrorist bomb blasts in 2005, which was certainly frightening and challenging,” she remembers. “I was scheduled to have dinner with visitors at a restaurant where one of the explosions took place. While I was grateful to be safe, it broke my heart to see the destruction and the impact on those who were affected.”

This year has brought the biggest challenge yet, as Covid-19 continues to rock the hospitality industry. Just a year ago, Macao hotels were thriving. But with the outbreak, McNab has watched the impact of the pandemic dramatically reduce visitors to Macao, and ultimately, guests at her hotels.

“Last year, we were positioned to blitz out our numbers! But now,” she says shaking her head, “I’ve been sent back to school.”

“I’m very grateful I’ve had the level of experience I had before Covid. I think when you don’t have the confidence that experience gives you, it would have been very intimidating to make some of these decisions.”

While her years in Macao have posed new professional challenges, they have also been richly fulfilling on a personal level. She has dedicated herself to mentoring women in the field and, in doing so, has earned a reputation as a trailblazer for women in her industry.

A dog lover since childhood, McNab also has a pet, a toy poodle named Bella — “the joy of my life,” she says. And she has also discovered long-distance running. Her first marathon run in Cambodia in 2011 at the age of 46, was like “first love”. She is training hard for her second, alternating high-intensity workouts with long distance morning runs.

Even on her few days off – as in her professional life – she is a woman who must keep moving.