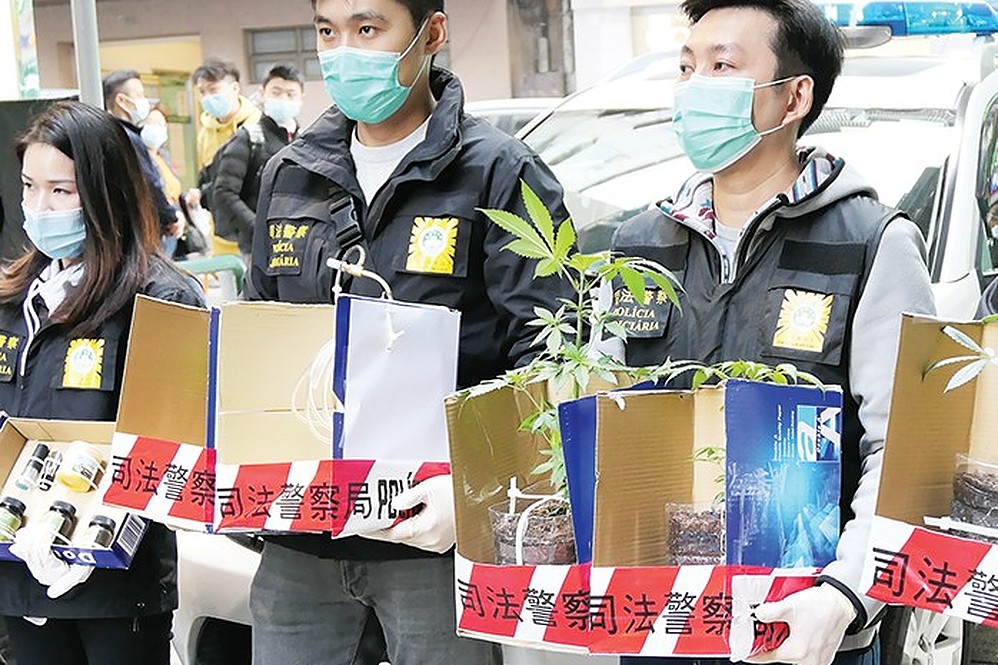 A Taiwanese man and a local male were arrested on Monday for growing cannabis at their flat in Rua de Sacadura Cabral near Tap Seac, Judiciary Police (PJ) spokeswoman Lei Hon Nei said during an outdoor press conference near the building where the men live.

The 28-year-old suspect from Taiwan surnamed Cheng told the police that he is a PR staff member. The other suspect is a 22-year-old local salesman surnamed Chan.

According to Lei, the Judiciary Police discovered while investigating another drug case that Cheng and Chan were growing cannabis at their home. PJ officers located the men and put them under surveillance. The officers took action on Monday at noon and arrested Cheng near their home, while Chan was later arrested while working at a shop in a hotel mall in Cotai.

According to Lei, PJ officers conducted a search of the flat and seized four cannabis plants, a modified portable greenhouse, a heating lamp, several bottles of liquid plant food, cannabis seeds and other growing equipment, as well as a small number of packaging bags, a digital scale and some drug-taking paraphernalia.

According to Lei, the duo met a year ago and became friends. Cheng rented the flat and Chan lived with him. PJ officers believe they had been growing the cannabis plants for two months but no finished cannabis products were found in the flat. The men claimed that the cannabis seeds were mailed to Macao by a friend from overseas, and the two admitted that they are addicted to cannabis.

According to the PJ investigation, the officers believe that the cannabis plants were grown for sale. The Judiciary Police are continuing their investigation, Lei said, investigating other locations where the plants are being grown, as well as other suspects and the men’s possible involvement in drug deals.

The men were transferred to the Public Prosecutions Office (MP) on Monday, facing charges of illegal production of, and trafficking in narcotics and psychotropic substances as well as illegal possession of drug-taking paraphernalia, according to Lei.