Two men were arrested after being found with 7,400 ml of liquid cocaine hidden in eight red wine bottles. 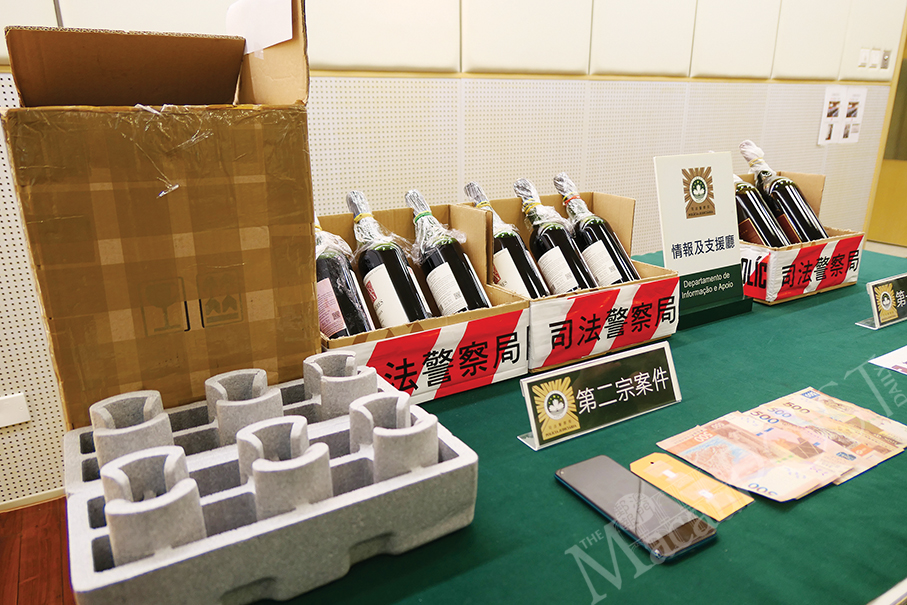 Two men were arrested separately last week after being found with 7,400 ml of liquid cocaine hidden in eight red wine bottles with an estimated street value of more than MOP 24.6 million.

The two suspects are a 39-year-old local cabbie surnamed Cheang and Lau, a 19-year-old Hongkonger, who works as a deliveryman for a logistics company.

According to Sou, since many jurisdictions have adjusted their immigration control measures due to the Covid-19 pandemic, gangs are now trafficking drugs in ever sneaky ways.

Sou said that the PJ  were tipped off by the police in Hong Kong that a gang was smuggling liquid cocaine hidden in red wine bottles and arranging their express delivery from South America or Europe via Hong Kong to Macao.

PJ officers discovered that the recipients’ addresses, contact phone numbers and other information were fictitious. Sou said the liquid cocaine was mixed with some “red stuff” to enhance the impression that the bottles contained red wine.

PJ officers arrested Cheang when he picked up a parcel at an express delivery company in the city centre. Two bottles of “red wine” containing about 2,980 ml of liquid cocaine were found in the parcel, with an estimated street value of MOP 9.8 million.

Lau was arrested after he collected a parcel at an express delivery company in the northern district. Police seized six bottles of “red wine” containing 4,495 ml of liquid cocaine with an estimated street value of MOP 14.83 million.

Under questioning, Cheang told the police that a gangster had promised him between MOP 2,000 and 3,000 for collecting the goods. Lau claimed that he had been hired to come to Macao to collect the parcel. After completing the mandatory 21-day quarantine at a hotel in Cotai, he immediately went to the northern district to pick up the parcel. Lau told the police that he had been promised HK$40,000 by the gang for going through the quarantine period and collecting the parcel.

The duo were taken to hospital for drug tests where both tested negative. The suspects refused to reveal further information to the police. However, according to Sou, the PJ believe that they were hired by the same gang. Sou said that investigations were continuing, adding that the police were looking for other possible suspects as well as the kingpin.

Cheang and Lau were transferred to the Public Prosecutions Office, and face charges of trafficking in narcotic and psychotropic substances.