Suspect, believed to be former pupil with past history of mental problems, suffered minor burns at the scene. 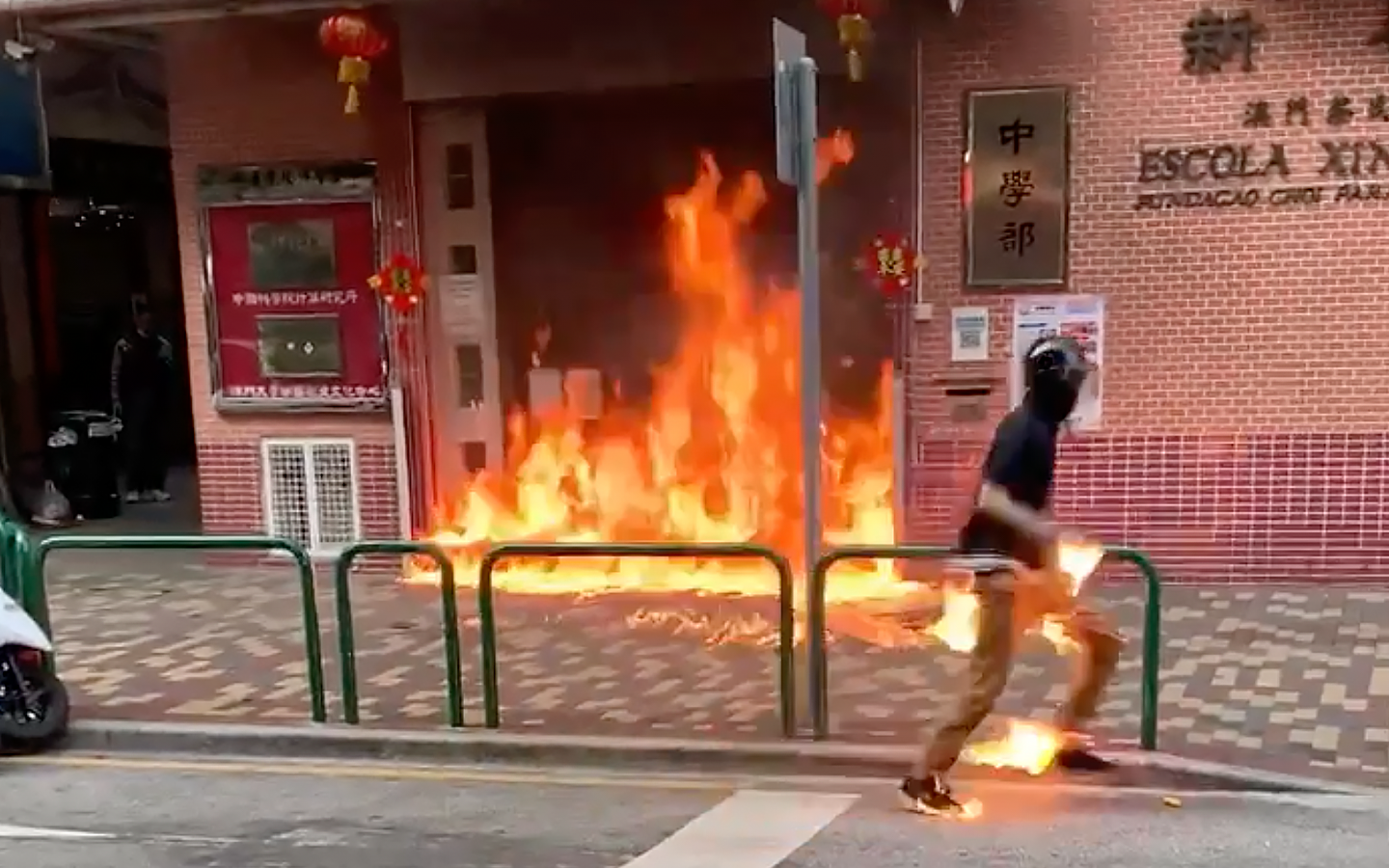 The Judiciary Police are investigating an arson attack on New Year’s Eve outside the front gate of a middle school in the northern district by a young man who reportedly had previously suffered from a mental disorder.

According to police and local Chinese-language media reports as well as video footage by passers-by, at about 4 pm on Friday the 21-year-old suspect wearing a crash helmet and holding a container suddenly splashed flammable liquid on the front gate of Xinhua School, and set fire to it.

According to video footage circulating on social media, a huge blaze engulfed the gate and set the suspect’s clothes alight, apparently injuring his hands and legs, after which he took off all his clothes except his red underpants.

The attack triggered the school’s fire alarm and a staff member who had witnessed the incident from inside the building immediately called the authorities.

Firemen quickly extinguished the fire, while the police arrested the man at the scene. He did not try to flee or resist arrest.

Witnesses said that the flames were 10 metres high.

The principal of the middle school said that about 630 teachers and students were on the campus at the time of the incident, adding that none of them were injured.

The school is located on Rua Oito do Bairro Iao Hon in a densely populated neighbourhood in the peninsula’s northern district near the Barrier Gate land border checkpoint.

A spokesperson for the Fire Services Bureau said six fire engines and 29 firefighters were dispatched to the scene. The bureau received a call about the fire at 4:02 pm on Friday and managed to put out the fire shortly after with a fire extinguisher.

The suspect reportedly sustained second-degree burns on his left forearm, left calf and both hands. He was rushed to the Conde de São Januário Hospital Centre for emergency treatment.

Police found traces of a thinner and some clothes at the scene. The Public Security Police have passed the case to the Judiciary Police for follow-up investigation.

According to police and media reports, the area affected by the blaze covered about 32 square metres. The blaze damaged the school gate, lighting equipment and decorations.

A total of 20 police officers were reportedly dispatched to the scene.

The suspect, who acted alone, is a local resident, police said.

According to media reports, the principal checked the school’s student records and suspects that he is a former student who had been disenrolled a few years ago because of his mental condition.

The Education and Youth Development Bureau said that it was very concerned about the suspected arson attack outside the school and that supervisors had been dispatched to the scene to follow-up on the case, The Macau Post Daily reported.