The Judiciary Police (PJ) have arrested a former vice-principal for allegedly cheating the government out of MOP 20 million in subsidies several years ago when she was at the helm of a local school, in suspected collusion with an engineering company, for the installation of new facilities and the launch of new courses at the school, most of which never got off the ground. 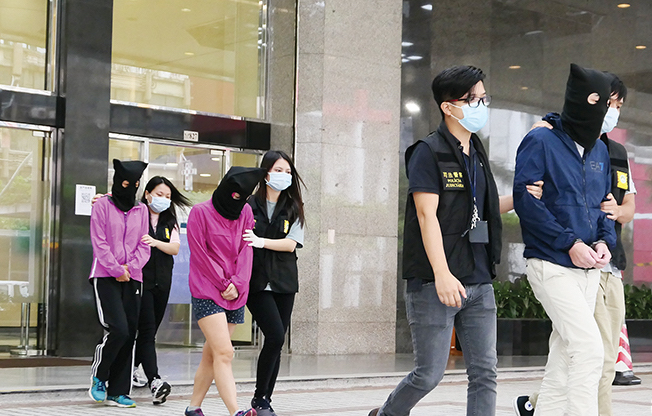 The Judiciary Police (PJ) have arrested a former vice-principal for allegedly cheating the government out of MOP 20 million (US$2.51 million) in subsidies several years ago when she was at the helm of a local school, in suspected collusion with an engineering company, for the installation of new facilities and the launch of new courses at the school, most of which never got off the ground, PJ spokesman Mark Sou Sio Keong said during a special press conference on Tuesday.

The police have also arrested the engineering company’s owner and his younger sister.

At the time of Tuesday’s press conference, the police were still looking for the then principal of the school, who was also involved in the case, said Sou.

The case was discovered when the new principal took office in 2017 after the then principal and then vice stopped working for the school. The Education and Youth Affairs Bureau (DSEJ) transferred the case to the Judiciary Police in 2018 for investigation.

Sou did not identify the school but said that it is located on the peninsula.

In a follow-up statement on Tuesday, the Education and Youth Affairs Bureau said that it discovered the case after its regular scrutiny of information concerning its subsidies granted to local schools.

According to Sou, the Judiciary Police received the case in March 2018 from the Education and Youth Affairs Bureau, which told the police that the school had applied for, and received subsidies of MOP 28 million from the bureau for a string of projects in the 2014, 2015 and 2016 school years, based on fake documents and that it confirmed that the school had created the bureau out of MOP 20.38 million out of the MOP 28 million.

According to Sou in their investigation, PJ officers discovered that the school applied for subsidies from the bureau for the installation of new facilities and the launch of new courses for the three school years. Sou pointed out that local schools have to submit a report to the bureau every year providing details about how they have used the subsidies for their projects.

521 projects never got off ground

Based on the information provided by the bureau and the school, the Judiciary Police discovered that the subsidies involved 582 projects. The PJ officers questioned relevant staff members of the school and the bureau, and found that only 61 projects were completed, while the remaining 521 projects – nearly 90 per cent – were never carried out or never existed, Sou said.

According to Sou, PJ officers also discovered that the school transferred the bureau’s subsidies to the bank account of the engineering company, after which some of the money was transferred to the owner’s bank account.

Concerning the other 521 projects, the Judiciary Police confirmed that the school used photos of existing classes and facilities pretending to be related to the projects in its reports submitted to the bureau for the 2014 and 2015 school years, with the aim of falsely telling the bureau that the 521 projects had been completed, according to Sou.

PJ officers arrested the three suspects in two flats on the peninsula. Under questioning, all of them denied having cheated the government. Sio told the police that she merely submitted the reports to the bureau and received the subsidies from it, following instructions from her superior. However, according to Sou, Sio admitted that she allowed school staff members to submit documents to the bureau and receive subsidies from it when the projects had still not been completed. The sister of the engineering company’s owner told the police that she had no clear knowledge of the company’s operation, and she was merely told by her brother to sign documents and transfer money from the company’s bank account to his bank account, according to Sou.

In its statement on Tuesday, the Education and Youth Affairs Bureau said that the school had fully cooperated with the bureau and the Judiciary Police in their investigation and evidence gathering. The statement also said that the operator of the school had returned to the bureau the subsidies for projects and courses that were never carried out, totalling about MOP 20 million.