An off-duty radio communications officer of the Macao Public Security Forces (FSM) was arrested for driving under the influence (DUI) on Sunday, while a passer-by involved in the case was arrested for a range of alleged crimes such as insulting the police. 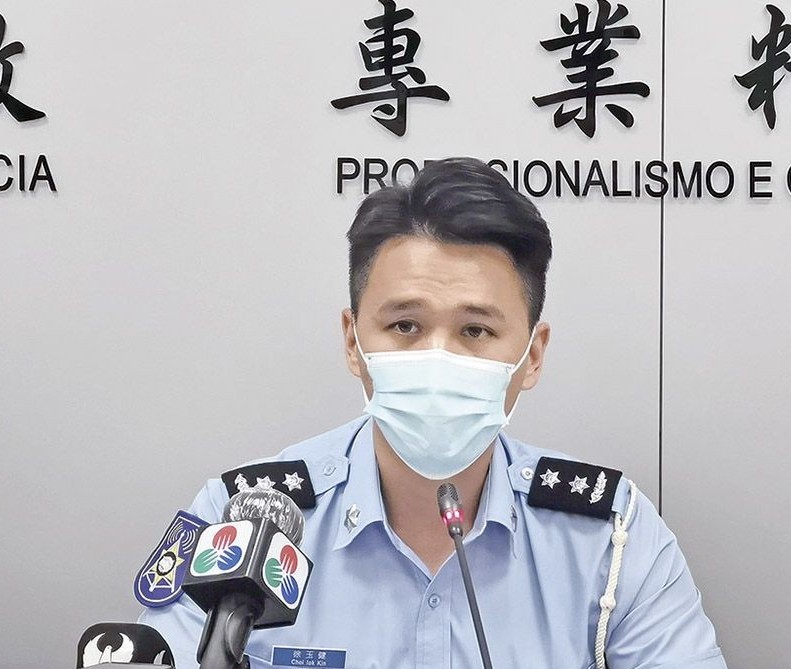 An off-duty radio communications officer of the Macao Public Security Forces (FSM) was arrested for driving under the influence (DUI) on Sunday, while a passer-by involved in the case was arrested for a range of alleged crimes such as insulting the police, Public Security Police (PSP) spokesman Choi Iok Kin said at a regular press conference on Wednesday.

The FSM staff member is surnamed Chan, while the passer-by is surnamed Ng. Both are in their twenties.

According to Choi, PSP officers received a report about a traffic accident in Avenida da Harmonia in Coloane at about 2 am on Sunday. Two officers arrived at the scene where four people – Chan, Ng, a man and a woman – were quarrelling. Choi did not name the man and woman.

After questioning, the man and the woman told the police that they had parked their car at the scene and remained in the vehicle for a chat. The front of their car was suddenly hit by Chan’s car.

According to Choi, PSP officers discovered Chan reeked of alcohol and asked him to take a breathalyser test but Chan refused and even denied that he was the driver. Officers gave Chan a warning. At the same time, Ng arrived at the scene. He told Chan to ignore the officers and not to take the breathalyser. Ng allegedly insulted the officers, resorting to foul language. Officers warned Ng twice but to no avail.

Choi said officers then saw Ng making a call. At the same time, the police received a call on their hotline from a man who claimed to be a lawyer held against his will in a hotel room in Taipa by two police officers.

PSP officers later confirmed that the smartphone number was the same as Ng’s and suspected that he reported a false case and arrested him at the scene of the accident.

According to Choi, when Ng was taken to a police station for questioning, he refused to provide his personal information and refused to have his fingerprints taken. After repeated warnings by the police, he still refused to cooperate. When PSP officers asked whether he was the “lawyer” who had called the police, Ng said he couldn’t remember.

Choi said after repeated warnings by the police, Chan finally admitted that he was the driver who caused the accident. He told the police that he had been drinking in a flat in Avenida de Vale das Borboletas in Coloane at about 9:30 pm on Saturday. He said that he then drove his car to the scene to wait for a driver to arrive to drive him home. However, before the driver arrived, Chan said that he crashed his car into the car parked there.

A breathalyser test showed that the officer’s alcohol concentration was 1.59 grammes of alcohol per litre of blood.

The duo was transferred to the Public Prosecutions Office (MP) on Monday.

Chan was sentenced to five months in prison, suspended for two years, and prohibited from driving for one and a half years, while Ng is awaiting trial for a range of alleged crimes such as filing a false police report, failing to obey a police order and insulting the police.

Meanwhile, the Public Security Forces said in a statement last night that they attach great importance to their staff ethics, and all violations of laws and regulations by its staff members will be dealt with seriously and will not be tolerated, adding that the investigation in the case will be completed as soon as possible.

The statement underlined that the bureau opened a disciplinary investigation on Monday.