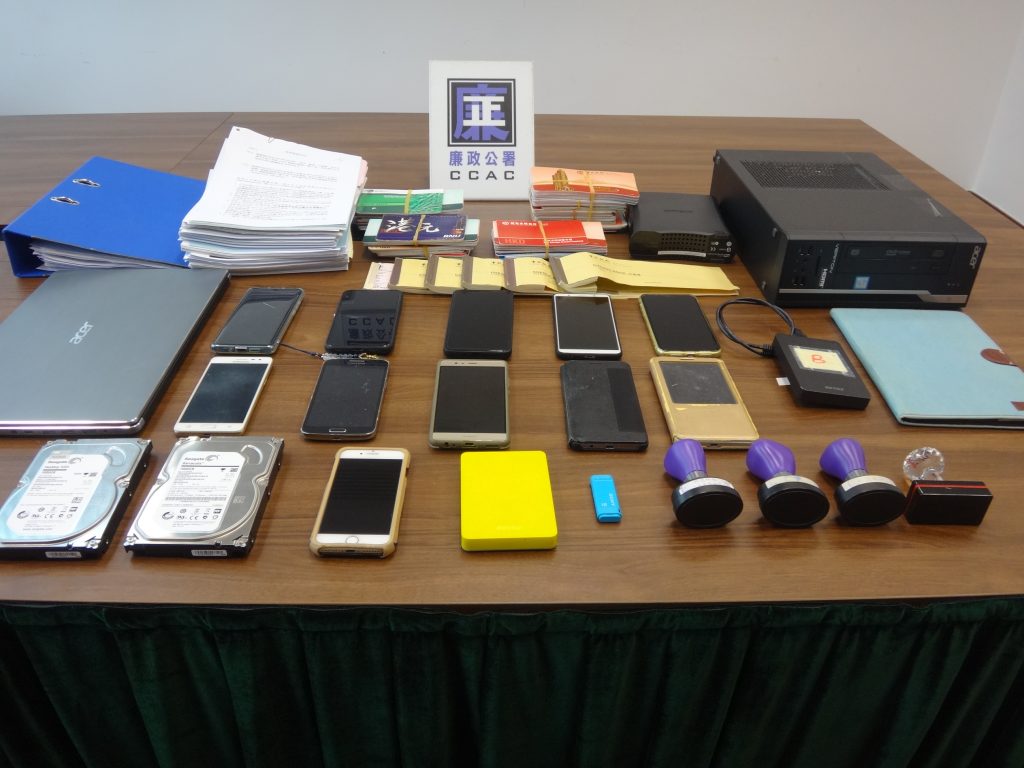 The Commission Against Corruption (CCAC) said in a statement on Monday that it has uncovered a private sector corruption case involving nine suspects including a bank manager, 11 banks, fraudulent mortgage loans worth MOP 770 million, 362 loans granted by the banks, and MOP 219 million in illegal gains.

According to the statement the nine key members, involving the mastermind, core members and bank staff, colluded with over 370 borrowers to use fake documents to obtain 362 mortgage loans fraudulently, illegally earning MOP 220 million in the process. The statement said that the CCAC believes it has been able to shut down the syndicate that had been operating for over 10 years.

The statement said that the office took action after receiving a tip-off that a man surnamed Chan was heading a fraudulent home loan syndicate. According to the information Chan was colluding with bank staff members to arrange fraudulent mortgage loans.

The statement did not say when the authorities were tipped off about the syndicate.

The statement said that after further investigation, the CCAC discovered that the organisation disguised itself as a real estate brokerage but in reality, it provided private loans and made huge profits through its extortionate interest rates.

The statement also said that when a borrower could not pay off their loan, the organisation would demand they participate in document forgery and apply for mortgage loans from the banks to pay off debts. The agency requested a large amount for handling fees from the borrowers in the process.

According to the statement, Chan’s syndicate even went to casinos to target potential borrowers who desperately needed cash. The syndicate also published “instant loan approval” ads in newspapers to attract clients. The syndicate forged proof of income and copies of bank passbooks, adding that a senior bank employee even falsified documents himself and used them to apply for loans from banks for the syndicate.

The syndicate spent the loans on its operations, investments and purchasing borrowers’ properties at below-market prices. The statement said that the CCAC discovered that between 2010 and 2020, the syndicate defrauded banks out of at least MOP 770 million in total and earnt over MOP 219 million in illegal gains from the loans.

The statement noted that the bank employees involved in the case violated financial institutions’ duty of confidentiality by illegally revealing customers’ information to members of the syndicate. The key members also taught the borrowers how to answer CCAC officers’ questioning in an attempt to interfere with the investigation process.

According to the statement, the case has been transferred to the Public Prosecutions Office (MP). The suspects face a host of charges such as membership of a criminal organisation, document forgery, fraud involving a considerably large amount and violation of the duty of secrecy provided by the Personal Data Protection Act charges. The Criminal Investigation Court has released the suspects on their own recognisance and barred some of them from leaving Macao.

According to a photo released by the CCAC on Monday, the banks affected by the scam include Banco Comercial de Macau (BCM), the local branch of Bank of China (BOC) and Banco Nacional Ultramarino (BNU).