Macao residents started queuing before 3 pm today at the 52 testing stations set up by the Novel Coronavirus Response and Coordination Centre for the mandatory citywide nucleic acid testing (NAT) that will be conducted until next Tuesday afternoon. All local residents and people staying in Macao are required to get the test, which is free of charge. Anyone who took a NAT after 3 pm on Friday is exempt. Prior booking is required at general testing stations. Members of the public are urged to arrive at their respective station on time. Late arrivals will need to book again.

The emergency measures were announced after the number of confirmed Covid-19 cases in Macao suddenly rose by three within the space of two days to 66.

The website for booking citywide NAT sampling launched at 10 am today. The test results will not be uploaded to the Macao Health Code, and they cannot be used for immigration purposes.

Fourteen self-paid stations have been set up to provide paper NAT reports.

Their results will be uploaded to the Macao Health Code for immigration purposes, and they will be included in the citywide NAT programme.

Prior booking is also required for self-paid NAT testing, using this link.

To optimise crowd management, the booking system for citywide testing operates on the basis of sampling stations, aiming to ensure accurate control of users. Real-time waiting information at different stations will be publicised every four hours. 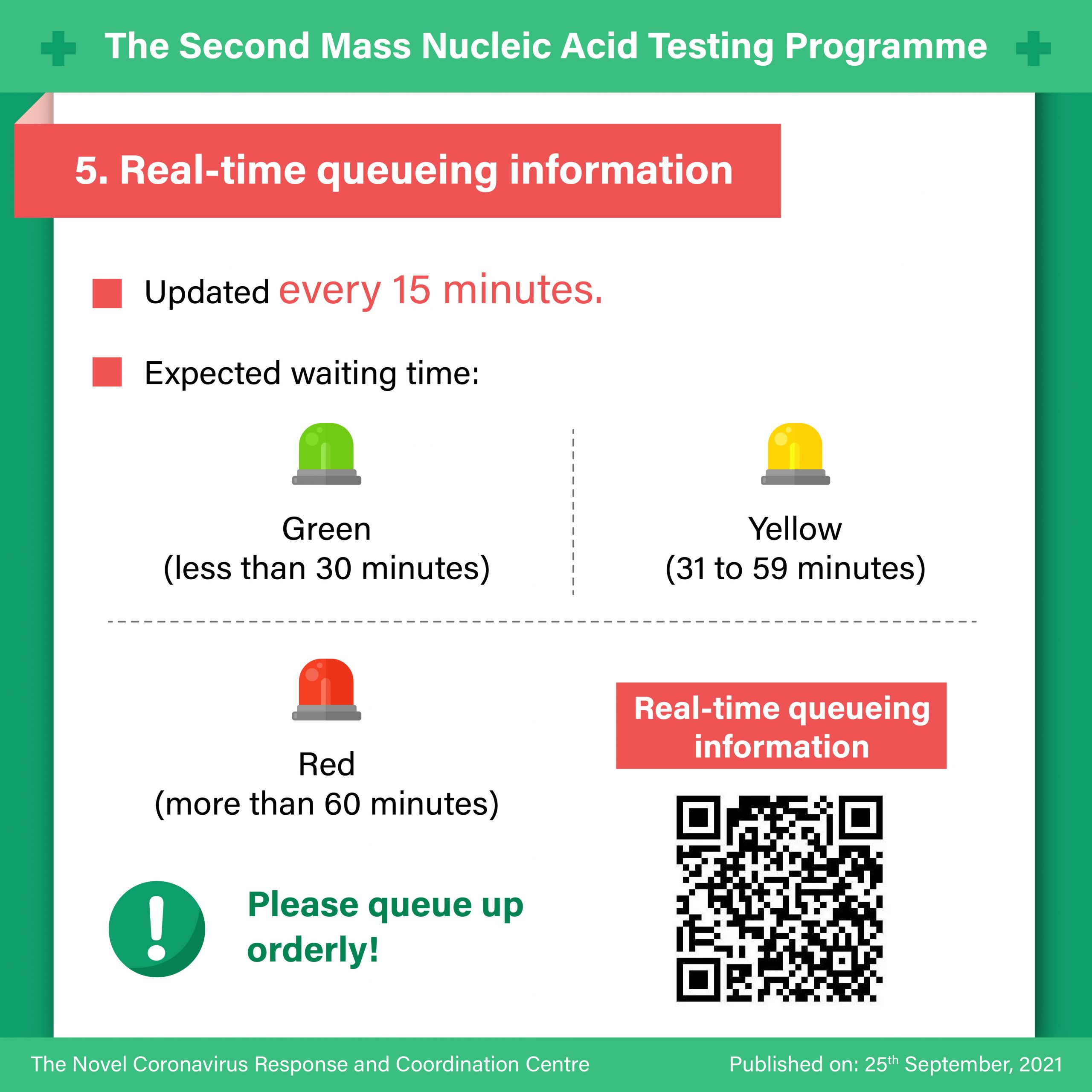 The expected waiting time will be shown in three colours: green indicates waiting time of less than 30 minutes, yellow indicates between 31 to 59 minutes, and red indicates one hour  or more.

Members of the public are advised to check the latest waiting time before they go to get a test.

The centre stressed that people in need of special care should not hurry to get tested on the first day, and urged the public to heed social distancing rules while lining up.

Yellow code holders may get tested at testing stations, where red code holders are required to take the test at the sampling station of the Conde de Sao Januario Hospital Centre. If developing a fever or other symptoms, medical attention should be sought by using an ambulance. Bedridden or immobile persons are urged to request assistance from families and friends, those with difficulties may call the Social Welfare Bureau’s (IAS) 24-hour hotline at 28261126 for assistance.

The city’s second mass testing drive was launched this morning after three new Covid-19 cases were confirmed on Friday and today. They are a local resident of Turkish nationality and two Nepali security guards working at a local quarantine hotel where the Turkish resident stayed for medical observation after his arrival here from Turkey via Singapore). So far the Health Bureau has not disclosed the virus variant of the three new cases.

Areas in Patane (Sa Lei Tau) district in the Inner Harbour and also in Avenida Horta e Costa were sealed off as part of the government’s civil protection officials in order to stem the possible threat of the novel coronavirus.

The first citywide testing was conducted in early August after the confirmation of a four-member Delta Variant family cluster. There were no positive results among the 716,251 people tested.

Meanwhile, due to the latest Covid-19 developments, all ferry services between Macao and Shenzhen and Zhuhai were suspended today.

The Education and Youth Development Bureau announced this morning the immediate suspension of all teaching at all school levels (higher, secondary, primary, pre-primary), until 3 October.

Museums and other public areas have also closed and several local restaurants have announced that they will close too.

Many mainland Chinese guests in Macao hotels checked-out and returned to their homes today, afraid that the situation might become more dangerous.