Having studied clinical trial data from around the world, Health Bureau launches drive for over-18s who have had both jabs at least six months ago. 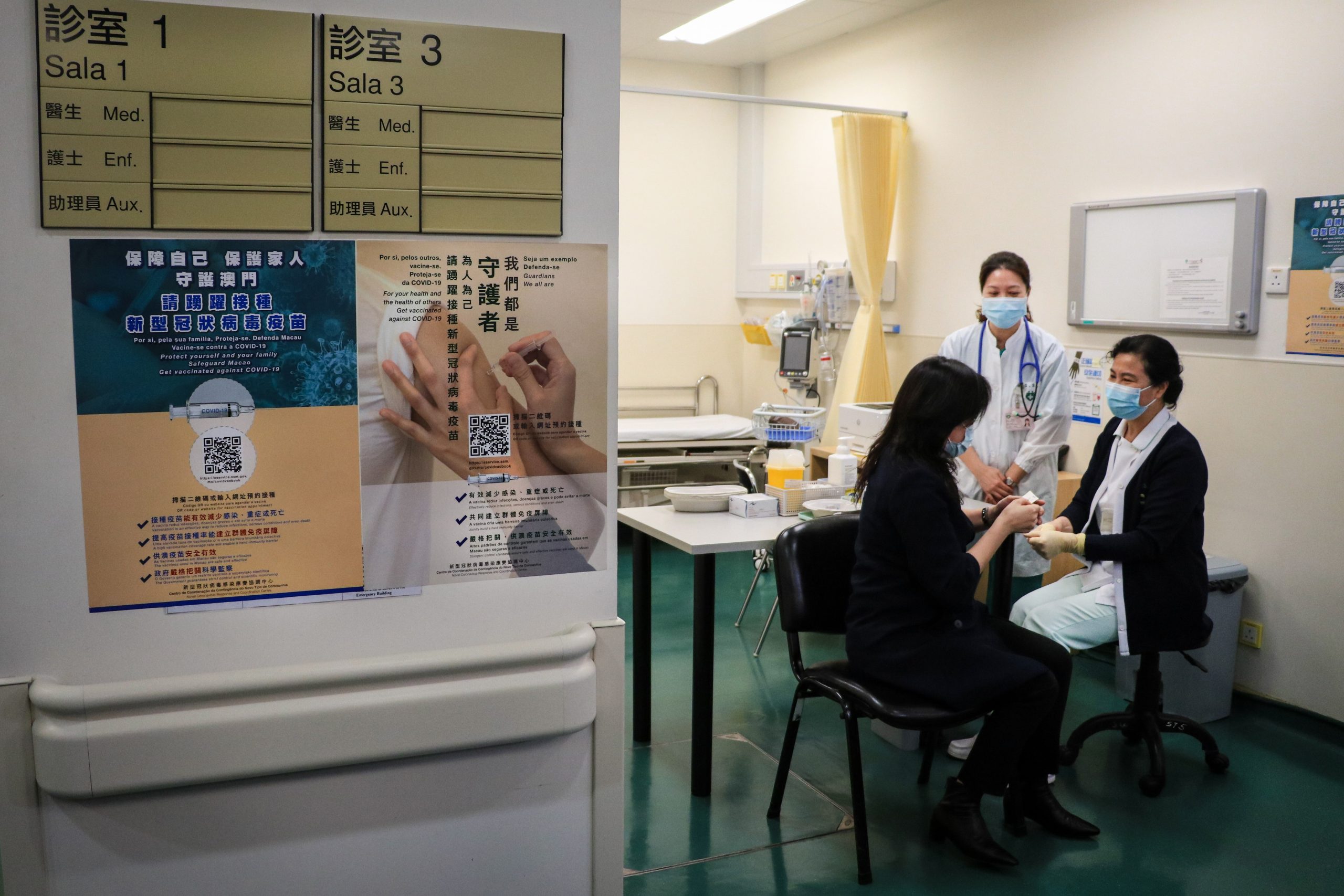 Macao will start administering Covid-19 vaccine booster jabs next Tuesday to those who were fully inoculated against the novel coronavirus at least six months ago.

In general, the programme will cover over-18s who have received two shots of China’s Sinopharm inactivated vaccine or Germany’s BioNTech mRNA vaccine.

The booster vaccination drive will be carried out in two phases. During the first phase the booster shots will only be given to:

– those working in occupations that are potentially subject to a higher Covid-19 risk;
– those with a weaker immune system, such as heart disease and diabetes patients;
– immuno-compromised individuals, such as cancer patients who are receiving radiotherapy, those who have had an organ transplant, and those with HIV/AIDS.

During the second phase, whose starting date has not yet been confirmed, the booster jabs will be extended to all other eligible potential vaccinees.

People who are moderately or severely immuno-compromised will be given a third primary dose at least 28 days after having their second Covid-19 jab, before receiving a fourth dose as their booster shot at least six months afterwards.

Tai Wa Hou, a clinical director of the Conde de São Januário Hospital Centre, said that the Health Bureau (SSM) decided to roll out Covid-19 vaccine boosters after studying clinical trial data and the administration of booster jabs around the world.

The booster shots will be available at all of the city’s 18 regular Covid-19 inoculation facilities. Potential vaccinees can start to make an appointment at 9 am next Monday for a booster jab.

Tai identified specific groups that are included in each of the three major groups of people covered by the booster jab programme’s first phase. He said that those working in occupations or positions that are potentially subject to a higher Covid-19 risk comprise eight groups: those working at border checkpoints; airline crew; those working at Covid-19 medical observation quarantine hotels and other quarantine facilities; those working at medical institutions; firefighters and paramedics tasked with transporting those required to undergo Covid-19 quarantine or those with a positive Covid-19 nucleic acid test (NAT) result; those in contact with a large number of members of the public; those working in various other sectors such as the frozen food sector; those who have an urgent need to visit Covid-19 high-risk areas.

According to Tai, moderately or severely immunocompromised individuals who are covered by the booster jab programme’s first phase comprise six groups:

Tai said that the findings of research studies worldwide suggest that moderately or severely immuno-compromised individuals can only be regarded as having been fully vaccinated against Covid-19 after receiving a third primary dose – which needs to be administered at least 28 days after the second Covid-19 jab. As a result, Tai said, they will have to receive a fourth dose as their booster shot, which is given at least six months after the third primary dose.

Tai added that moderately or severely immuno-compromised individuals are covered by the booster jab programme as long as they are aged 12 or over, which is different to all other eligible vaccinees whose minimum age is 18 for the administration of a booster shot.

Tai said that while those receiving a booster dose can “mix and match” their shots by opting for a vaccine with a technological approach different to their first two jabs, the SSM recommends that they should adhere to the same technology as their first two inoculations.

Tai announced that four groups of people are not covered by Macao’s Covid-19 booster jab programme for the time being: