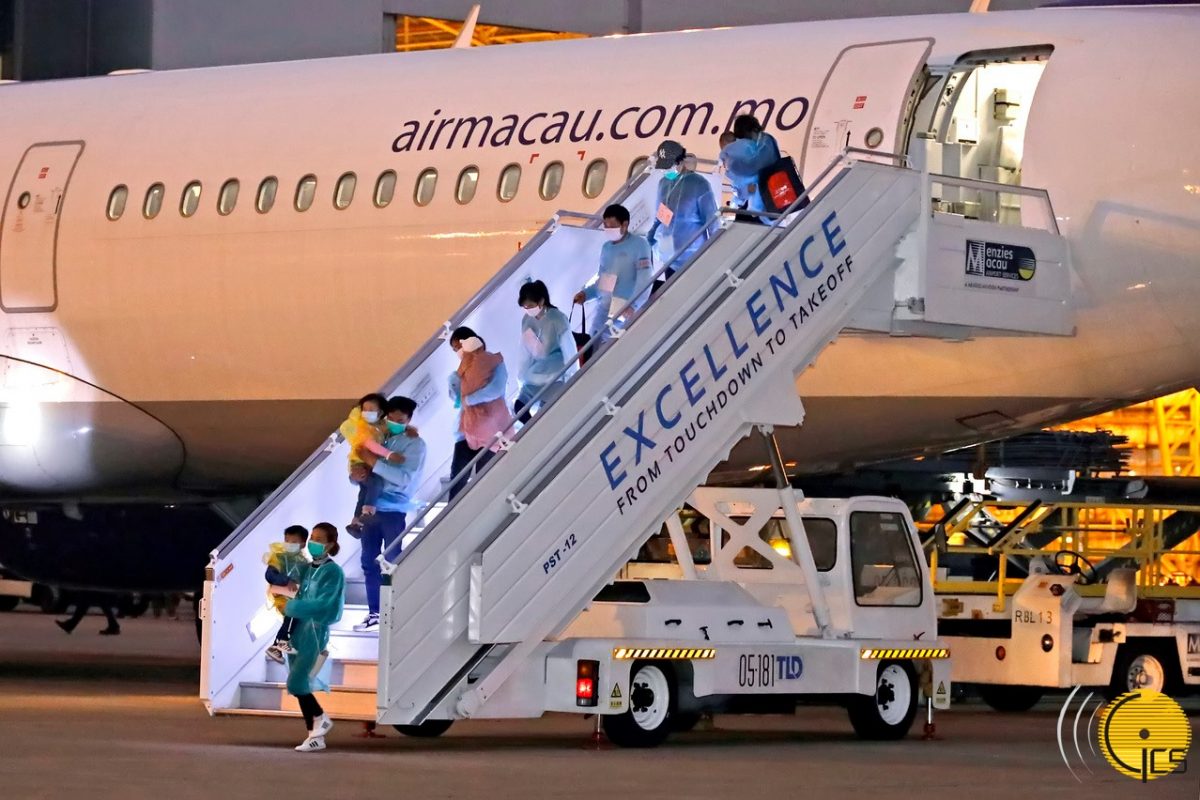 A total of 57 Macau residents were evacuated today by the local government from novel coronavirus-stricken Hubei province on an Air Macau charter flight.

Macau government officials described the airlift as a “success.”

Originally, 59 Macau ID card holders were planned to be on the flight. However, according to a press conference at the local airport shortly after the flight had touched down, one Macau resident failed to arrive at the airport in Wuhan, while a 17-year-old boy was barred from the flight because his body temperature exceeded the officially allowed maximum of 37.2 degrees Celsius.

The officials were quick to add that the Hubei authorities would look after the youth in close liaison with the local government.

The flight had departed from Macau in the morning and arrived back in the late afternoon. The provincial capital Wuhan, the epicentre of the COVID-19 outbreak, lies some 940 kilometres north of Macau. Officials said the flight took about 1 1/2 hours.

Apart from the 57 returnees, 15 crew members and Macau government officials from various bureaus were on the flight such as doctors and nurses. The crew members will be subject to medical surveillance for a fortnight, officials said.

The evacuees, aged between three months and 77 years, were immediately taken from the local airport in Taipa on several minibuses to a quarantine facility in Coloane where they will have to remain for 14 days and undergo at least three COVID-19 tests.

Secretary for Administration and Justice Andre Cheong Weng Chon told the press conference that the government was still assessing the situation before deciding if and when to organise a second evacuation flight from Hubei.

According to local government officials, about 110 Macau residents are still in Hubei. Cheong said the cost of today’s evacuation flight was of no particular importance, considering that it was the government’s responsibility to look after local residents’ interests.

According to the press conference, Chief Executive Ho Iat Seng has expressed his gratitude to the Air Macau crew and government officials who turned the evacuation flight in a success.

The 10 patients comprise seven tourists from Wuhan and three locals. All of them were discharged after having been cured of the disease, Health Bureau (SSM) officials have said.

The Macau government has imposed a string of measures to stem the spread of the virus since early last month such as the sale of facemasks to residents and non-resident workers at the fixed price of 8 patacas for 10 facemasks every 10 days and the mandatory presentation of digital health declarations to enter government premises.