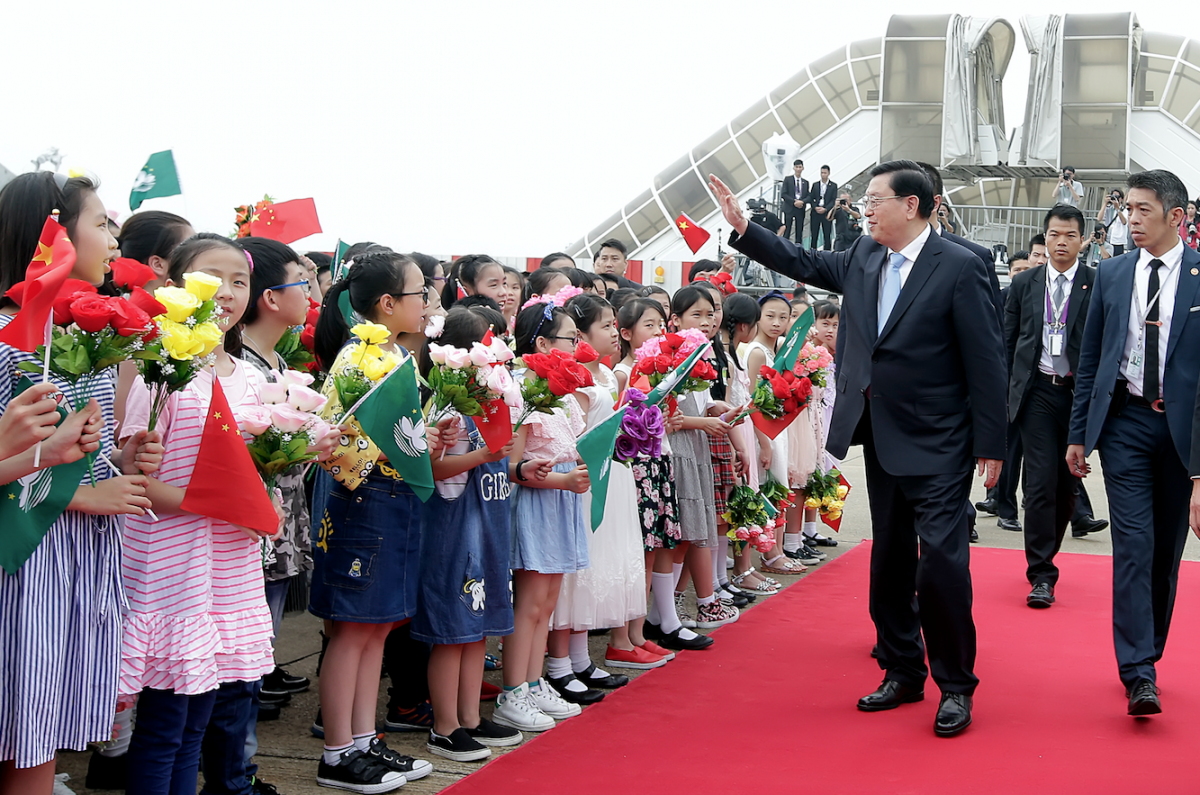 Foreign Ministry will do everything to ‘safeguard Macau’s stability & prosperity’

Zhang Dejiang, the nation’s top lawmaker, yesterday wrapped up his three-day inspection of the Macau Special Administrative Region (MSAR), calling on the city to make greater efforts to keep being a “good role model” of successfully practicing the “one country, two systems” principle

Since Macau’s return to the motherland more than 17 years ago, the MSAR has witnessed overall progress in its socio-economic life, with remarkable achievements made in practicing the “one country, two systems” principle, Zhang said.

According to Xinhua News Agency, he noted the effective implementation of the central government’s overall jurisdiction, the full guarantee of the MSAR’s right to a high degree of autonomy and the sound function of the executive-led system.

Zhang called on Macau to earnestly implement the important instructions by President Xi Jinping on the MSAR’s work and make concerted and redoubled efforts to work for the development of the region and the motherland.

In a speech delivered at the airport upon arrival, Zhang conveyed the sincere greetings and wishes from President Xi and the central government to Macau compatriots.

During his inspection visit, Zhang met with Chinese People’s Political Consultative Conference (CPPCC) National Committee Vice Chairman Ho Hau Wah and Chief Executive Fernando Chui Sai On separately and spoke highly of their contributions to the motherland as well as the MSAR.

After listening to a report on the work of the local government, Zhang noted that the current administration has seized the strategic opportunities brought about by the country’s 13th Five-Year Plan (2016-2020) and the Belt & Road Initiative and pushed ahead with Macau’s role as “one center, one platform.”

Macau is striving to become a world tourism and leisure center and a platform for business and trade cooperation between China and Portuguese-speaking countries.

Zhang noted that the current administration has made positive progress in promoting the appropriate diversification of the city’s economic development and improving people’s livelihood.

At a symposium attended by more than 150 representatives from all walks of life, Zhang called for cherishing the successful experience of the city’s development, and accurately following through the principle of “one country, two systems” and the Basic Law.

He also called for further implementing the central government’s overall jurisdiction over the MSAR and its right to a high degree of autonomy in accordance with the law, so as to push for its economic development and further improvements in people’s well-being.

When inspecting the Legislative Assembly, Zhang noted that the legislature has earnestly performed its duties to support, coordinate and supervise the local government according to the law, and also has contributed significantly to Macau’s prosperity and stability, rule of law and social advancement.

Zhang also met with the city’s judges and prosecutors when inspecting its judicial organs, and encouraged them to strongly foster awareness of the importance of the nation’s Constitution and Macau Basic Law.

In meeting with representatives from the education sector, Zhang said educators should always stick to the right direction and lead students to build character, improve their knowledge, gain innovative thinking and serve the country.

During his visit, Zhang was also briefed on the construction of the Hong Kong-Zhuhai-Macau Bridge and visited Joyful Family Service Center of the Women’s General Association of Macau.

He also met with the heads of central government entities based in Macau.

Macau’s 1st satellite to be launched in 2020: MUST