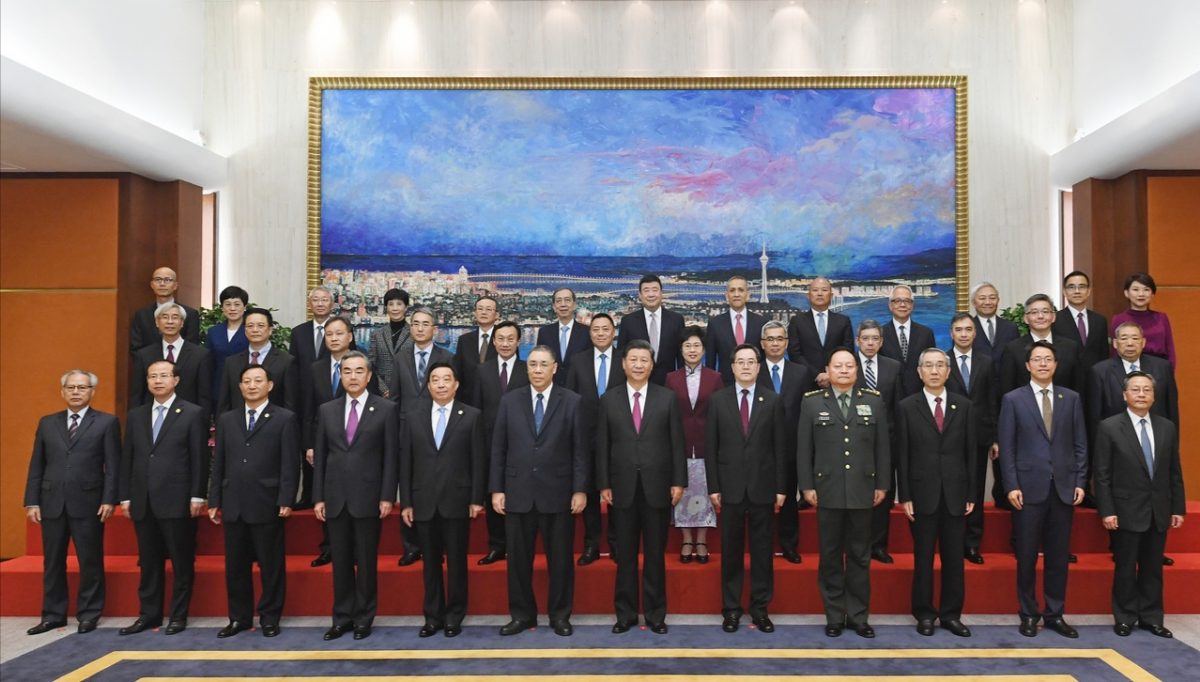 President Xi asks Shenzhen to promote the construction of the GBA

President Xi Jinping said on Thursday that Macau has made “proud achievements” since its return to the motherland 20 years ago, and he referred to what he had said last time when visiting Macau five years ago that as long as a place has the “right path, good policy, flexible posture and consolidated public sentiment”, a “big show can be played on a small table”.

Xi added that in the case of the Macau Special Administrative Region (MSAR) it can clearly be seen that “a small table is putting on a big show”.

Xi made the remarks on Thursday afternoon in a speech during a meeting with senior officials and civic leaders at the Macau East Asian Games Dome in Cotai.

A Government Information Bureau (GCS) official told reporters that about 150 people attended the meeting including outgoing Chief Executive Fernando Chui Sai On who will be replaced by Ho Iat Seng on Friday.

Xi used the following terms in his speech to describe Macau:

Xi pointed out that Macau is “small but rich”. Its gross domestic product (GDP) has reached US$83,000, ranking second in the world, and the local government’s financial reserves exceed five hundred billion patacas, Xi underlined.

Xi noted that Macau is “small but robust”. Macau has a “robust” development momentum, and its GDP annual average growth rate has reached 7.6 percent after its return to the motherland, so that Macau has become one of the fastest-growing economies in the world, Xi pointed out.

Xi said that Macau is “small but healthy”. Xi pointed out that Macau boasts wide primary health care coverage, which has been listed as a model for the Pacific region by the World Health Organisation (WHO). Xi also pointed out that the average life span of Macau residents is ranked number two in the world.

Xi noted that Macau is “small but pretty”. The Historic Centre of Macau has been listed as a World Heritage Site by the United Nations Educational, Scientific and Cultural Organisation (UNESCO) in 2005, and UNESCO has also listed Macau as a Creative City of Gastronomy in 2017. The number of visitors to Macau last year came close to 36 million people, Xi noted.

Xi thanked all social MSAR sectors and citizens for their accomplishments.

Xi stressed that promoting the “One Country, Two Systems” principle in the new era and protecting Macau’s “good situation” still needs more efforts by all social sectors. Xi said he hoped all those who attended yesterday’s meeting will ensure “exemplary functions” in the following three elements:

Secondly, Xi urged the attendees to continue to be “important promoters” of Macau’s “prosperity, stability and harmony”. Xi urged them to actively participate in the MSAR’s development in all sectors and promote Macau’s moderate economic diversification. The president also called for solving problems through “rational negotiations”, in order to make Macau more “stable and harmonious”.

Thirdly, he urged the attendees to be the “active participants” in the Chinese nation’s rejuvenation. Xi urged them to actively encourage local society to integrate with the nation’s development strategy.

Xi advised the attendees to utilise Macau’s internationalisation as a matter of strength, in order to assist in the nation’s further reform and opening-up, as well as to encourage Macau people to jointly share the historical responsibility with their compatriots for the nation’s rejuvenation, so as to share the “great glory of a prosperous society” together.

According to the Macau Post Daily, Xi concluded his six-minute speech by expressing his confidence in all the attendees and Macau.