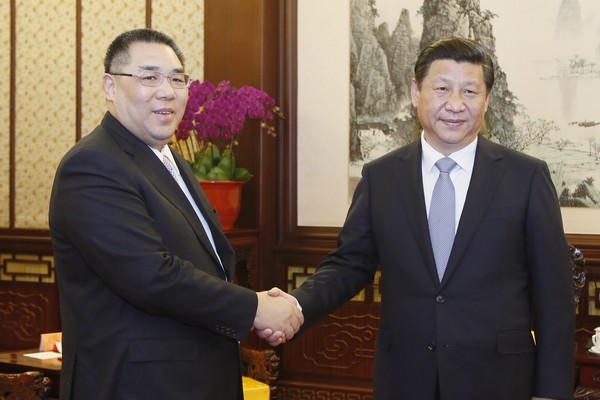 Xi made the remarks during a meeting with Macau Chief Executive Fernando Chui Sai On in Beijing where he presented his 2013 work report and 2014 policy guidelines to the central government.

The destinies of Macau and the mainland have always been tightly tied together, and the two sides will achieve common progress and development with efforts made by all the Chinese people, the president was quoted by Xinhua as telling Chui.

Xi said that the central government was fully supportive of the work of Chui and the Macau government in maintaining stable economic growth and a harmonious society.

Macau should also be prepared for adversity while enjoying prosperity and work on long-term plans, Xi said.

The president urged the Macau government to take practical and innovative measures on the basis of the city’s fast development over the past years and “probe multiple appropriate ways to develop” the local economy.

Meanwhile, a statement released by the Macau Government Information Bureau (GCS) quoted Chui as saying that the central government “supports the “diversification of Macau’s economy”.

The statement also quoted Chui as telling reporters in the capital that the central government was paying close attention to next year’s activities in Macau, such as the  2014 Tourism Ministerial Meeting of the Asia-Pacific Co-operation (APEC) forum, the chief executive election and the 15th anniversary of the establishment of the Macau Special Administrative Region (MSAR).

Chui said he had told the national leadership that Macau’s small size and dearth of land and human resources were limiting the city’s development potential.

According to the GCS statement cited by The Macau Post Daily, Xi called for the diversified and sustainable development of Macau’s economy so that its citizens can live in peace, harmony and security.

The statement also pointed out that Chui met with Foreign Ministry and National Tourism Administration officials in Beijing Wednesday.

Chui and his entourage are slated to return to Macau today.(macaunews)

Macau’s gambling revenue plunges by a third in November