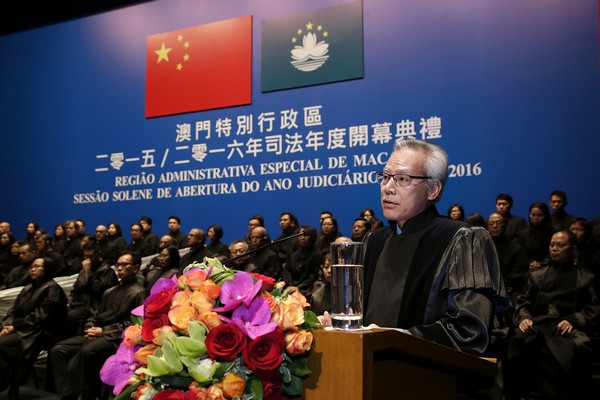 Court of Final Appeal (TUI) President Sam Hou Fai said on Wednesday the Judiciary can only be judged by facts and the law, not “baseless” criticism.

Sam made the remarks in a speech during Wednesday’s opening session of the 2015/2016 Judicial Year at the Macau Cultural Centre in Nape.

Several associations representing local doctors’ interests published a string of joint statements in the local Chinese-language newspaper Macao Daily News earlier this year, condemning the court’s ruling on two pediatricians who work at Kiang Wu Hospital, in which the duo were found guilty of negligence.

The groups claimed that many local judges lacked the expertise and experience to make a fair judgment in the case. They also claimed that such a ruling could affect the morale and performance of local doctors.

Without directly referring to the controversy, Sam said judicial independence was enshrined in the Macau Basic Law, apart from being a core value of every modern civilised society.

Sam said while he respected every citizen’s right to voice their concerns, people needed to strike a balance between freedom of expression and judicial independence.

“However, in recent years, there have been certain groups or people who use local news media to criticise the judicial system or legal proceedings,” Sam said. He added that this “put unprecedented pressure on the system and the judges.”

He urged judges not to bow to pressure, continue to be impartial and only rely on facts and the law when they make their judgments.

Sam urged judges to maintain a certain distance from civil society, as if there were a “wall of glass” between the two. “[Judges] should be able to see society and understand people’s needs, but not get tangled up in the complicated web of connections,” he said.

“I hope everyone will worship the Goddess of Justice, to rule according to the law, without fear or personal feelings.”

Sam said he agreed that criticism is necessary for improvements in the judicial system, but stressed that there is a difference between constructive criticism and baseless criticism. “The only standards which could determine whether a Judiciary is fair in its judgment or not are facts and the law,” he added.

Meanwhile, delivering a speech at the same event, Public Prosecutor-General Ip Son Sang appealed for the understanding of the public that harsher punishment does not automatically equate to a reduction in the number of crimes.

“In fact, punishment isn’t the solution to all our problems.  Based on criminological studies, harsh punishment isn’t the best tool in crime prevention, punishment should be the last resort,” Ip said, “As such, we must study deeply, placing people’s interest at the forefront, and strike a balance between combating crime and protecting human’s rights.”

Meanwhile, Macau Lawyers Association (AAM) President Jorge Neto Valente complained in his speech that the local Judiciary continued to be sluggish while its quality was worsening. Valente also called for a reform of the judicial system.

Chief Executive Fernando Chui Sai On pledged that the government will construct purpose-built facilities for the Judiciary to create “better conditions for the efficient functioning” of the courts and Public Prosecution. (macaunews/macaupost)

Macau residents most dissatisfied with transport