Tam vows to co-ordinate bureaus on smoking ban in casinos 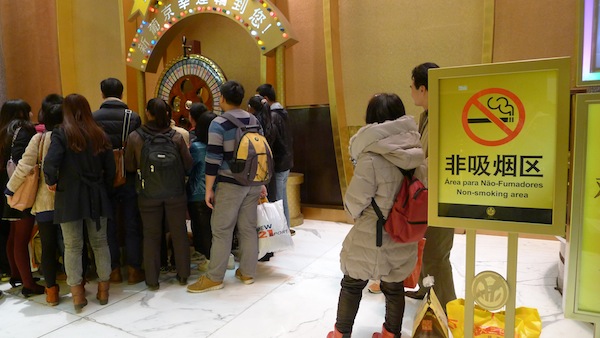 Tam vows to co-ordinate bureaus on smoking ban in casinos

Tam made the comments after attending the opening ceremony of a photo exhibition marking the 10th anniversary of the establishment of the China and Portuguese-speaking Countries Economic Co-operation Forum Macau in Praça do Tap Seac.

Tam said that while tobacco control was one of the key policies that the government is pushing forward this year, the DICJ would follow the suggestions made by the Health Bureau (SSM) to ensure that casinos comply with the anti-smoking policy.

Tam also said that it was too early to doubt the effectiveness of the Tobacco Control Law that bans smoking in casinos with the exception of designated smoking areas which gaming operators can set up in no more than 50 percent of the respective gaming venue’s public space.

The finding of an SSM report, announced on Wednesday, showed that 28 of the city’s 44 gaming venues that have set aside smoking areas have failed in the government’s air quality assessment.

“It’s hard to say if it’s not effective because it’s only the first report and [the measure] has only just launched,” Tam was quoted by The Macau Post Daily as saying, adding, “28 failed, but you can also say that about 20 passed, so it depends on how you look at it. It needs time for [a] gradual [improvement].”

The report said that gaming operators of the 28 gaming venues in question had four months to improve air quality in their smoking areas and if by then they still fail the test, the Health Bureau might reduce the size of the smoking areas in the respective gaming venue.(macaunews)