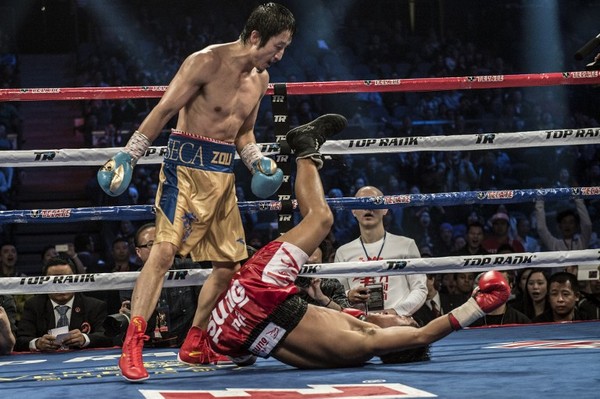 Chinese flyweight Zou Shiming took the next step towards a world title shot when he registered the first stoppage win of his professional career against Thailand’s Yokthong Kokietgym on Saturday.

The two-time Olympic champion controlled the bout at Macau’s Venetian casino resort from early on and he dropped Yokthong three times before the referee halted it in the penultimate round, the seventh.

The 32-year-old meted out heavy punishment in the fifth and sixth rounds and he knocked down Yokthong, 19, with a powerful shot in the seventh and then twice more following an unanswered flurry.

The victory for Zou against the Thai boxer improved his professional record to 4-0 and will allay his critics following some unconvincing performances after making the leap from amateurism.

Zou is being lined up to challenge International Boxing Federation (IBF) world champion Amnat Ruenroeng of Thailand in Macau in November.(macaunews)