Visitors of Zhuhai’s Doumen district between 16 January and Saturday to seek treatment at the public Conde de São Januário Hospital Centre if they experience Covid-19 symptoms. 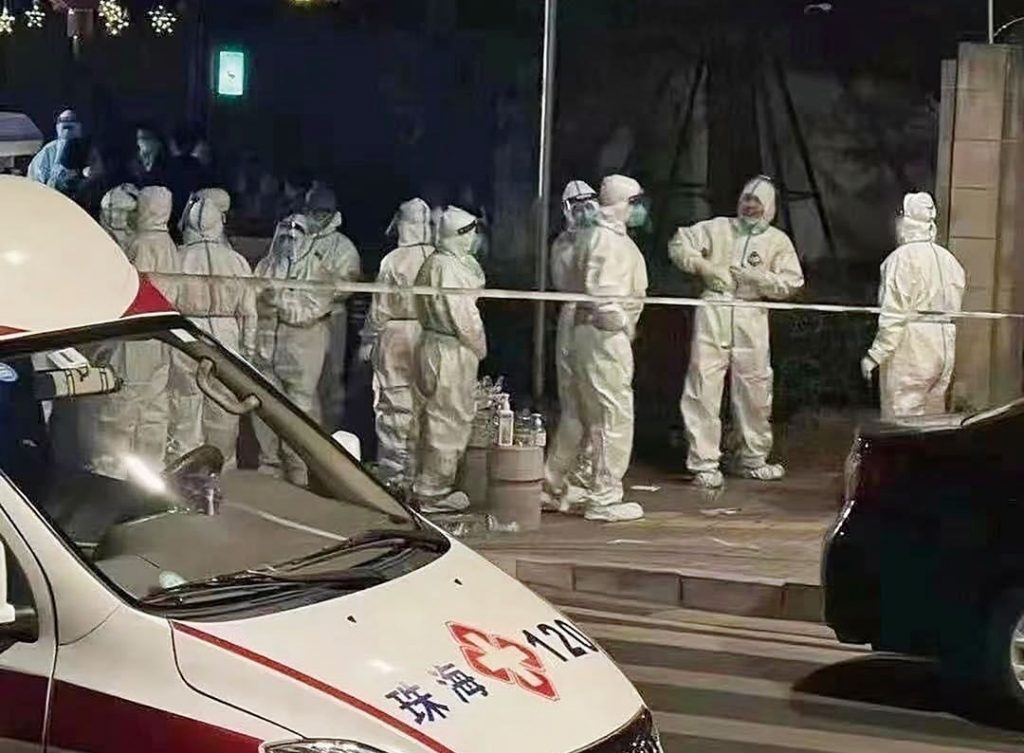 The Macao government’s Novel Coronavirus Response and Coordination Centre said in a statement on Sunday that it is “paying close attention” to a case in which a person – whose gender was not revealed – who returned to the mainland from Ukraine early this month tested positive for Covid-19 at the end of their “home health management” in Zhuhai’s Doumen district, urging those in Macao who visited the district between 16 January and Saturday to seek treatment at the public Conde de São Januário Hospital Centre if they experience Covid-19 symptoms.

According to the statement, Zhuhai notified Macao about the case on Sunday.

The centre’s statement quoted the Zhuhai Health Bureau’s announcement about the case, which was classified as an imported and asymptomatic case. The Zhuhai Health Bureau said in its announcement Sunday morning that the person surnamed Liu underwent 14 days of “concentrated” quarantine in Guangzhou after returning from Ukraine on 2 January, after which he or she returned home in Zhuhai for seven days of “home health management”.

The Zhuhai announcement said that Liu tested positive for the novel coronavirus in a nucleic acid test (NAT), and also positive for IgG antibodies, on Saturday – shortly before the end of the “home health management”, adding that medical experts from the province and the city have concluded that it was an imported and asymptomatic case.

Asymptomatic cases refer to people who have tested positive for the novel coronavirus but develop no symptoms such as fever, cough and sore throat, yet they are infectious and pose a risk of spreading to others.

Unlike Macao where all those who have tested positive for Covid-19 are classified as confirmed Covid-19 patients – regardless of whether they experience Covid-19 symptoms or not, the mainland health authorities separately classify “asymptomatic” Covid-19 cases and “confirmed” Covid-19 cases.

Sunday’s Zhuhai announcement also described the case as one in which the person – Liu – “later tested positive for the novel coronavirus again”.

The Macao Health Bureau (SSM) has said earlier the fact that some Covid-19 patients discharged from hospital or asymptomatic carriers of the novel coronavirus have later tested positive for the virus again is “merely a phenomenon”, which means that they do not have a relapse, i.e. suffering Covid-19 symptoms again.

Zhuhai health authorities have underlined that asymptomatic carriers of the novel coronavirus who have again tested positive for the virus are less infectious than those who have been infected with the novel coronavirus. The Zhuhai health authorities have so far not detected anyone who has visited Macao after having been in close contact with Liu, the statement said.

The statement urged those in Macao who visited Doumen between 16 January and Saturday to immediately seek treatment at the public hospital’s emergency department if they have symptoms such as fever, cough, dyspnoea (shortness of breath) or loss of taste and smell.

According to the Zhuhai Health Bureau’s website, the city has confirmed 112 Covid-19 cases since early last year, 14 of which have been classified as imported. The website does not say if anyone has died of the novel coronavirus disease.

Macao has recorded 47 Covid-19 cases since 22 January last year, 45 of which have been classified as imported, while two cases have been classified as “connected to imported cases”. The 47th case was confirmed on Friday. The patient is a 43-year-old local woman who took an Air Macau flight to Macao from Tokyo on Thursday night. She had departed from Dubai to Tokyo via Singapore on Tuesday. The latest case came after Macao had confirmed its 46th Covid-19 case in late June last year.

The first 46 patients have all been cured and discharged from hospital, and no fatalities have been reported in Macao, which has been spared a community transmission of the novel coronavirus disease.

The 47th Covid-19 patient, who is asymptomatic, is undergoing treatment in the isolation ward of the public hospital. Health Bureau officials described her condition at the weekend as “normal”.