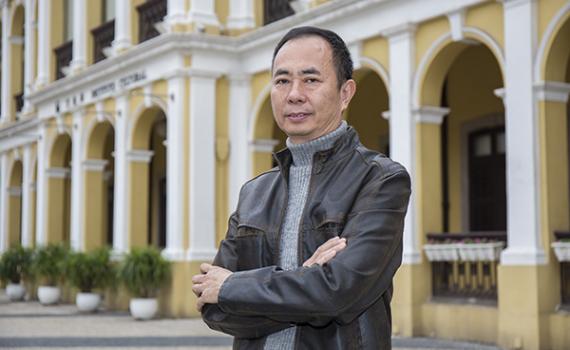 Ung Vai Meng has announced today that he is resigning as President of the Macau Cultural Affairs Bureau (ICM).

Ung has been ICM’s president since March 2010. He said he will resign from his post next month.

The Secretary for Social Affairs and Culture, Alexis Tam told journalists today that Ung Vai Meng asked to be relieved from his position to return to his artistic life and a successor will be appointed soon from the ICM internal structure.

Uni Vai Meng denied his departure is due to conflicts with the government. He said he wants to go back to his previous life as an artist.

Ung Vai Meng was born in Macao in 1958 where he studied drawing and watercolors with Master Kam Cheong Leng.

In 1995, he won the first prize for installation art at the 2nd Macau Biennial Art Exhibition and a total of fifty prizes in local and foreign graphic art competitions including Distinction, Gold and Silver Prizes in the Publishing section and the Gold and Bronze Prizes in the Poster section of the 1st Macao Design Biennial Exhibition, the Asian Jury’s Prize at the HKDA Design 96′ show, and Distinction, Gold Prize in the Poster section of the 2nd Macao Design Biennial Exhibition. He is a member of the Macao Fine Arts Association and a founding member of the Macao Friends of Culture Association. He has held various solo exhibitions in the past.

In 1999, he obtained a Badge from the Macau Government for his contribution in the cultural sector and was also designated as the first Director of the Macao Museum of Art in the same year.

In 2002, he was awarded the Special Award of “Honour Distinction for effort” from the Government of the Macau Special Administrative Region. In 2008, he was designated as the head of Cultural Activities and Recreation Department of Civic and Municipal Affairs Bureau. On March 1st 2010, he was appointed as the President of Cultural Affair Bureau of the Macau SAR Government.

Ung is an avid painter with an exclusive penchant for sketching and watercolors.

Ung Vai Meng will retire as a civil servant after 40 years of serving the Macau government.