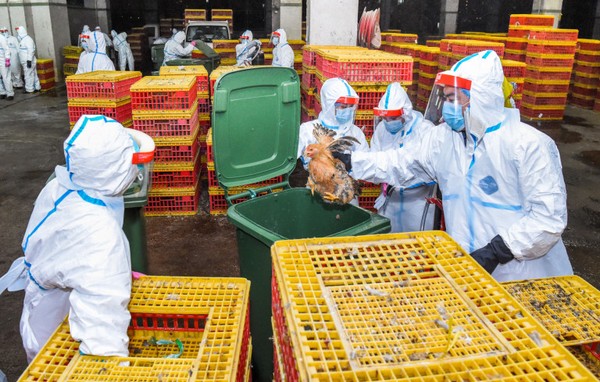 The government has decided to stop the sale of live poultry in the city for three days starting from Wednesday after discovering the H7-type avian influenza in an environmental sample at the Temporary Patane Market yesterday, Civic and Municipal Affairs Bureau (IACM) Management Committee President Alex Vong Iao Lek announced last night.

The IACM and the Health Bureau (SSM) jointly hosted a press conference to make the announcement at the ICAM Headquarters.

IACM Management Committee member Ung Sau Hong said during the press conference that the environmental sample was from the ‘Fat Kee’ stall on the first floor of the market.

She said that all the chickens of the stall, imported from Gaoming district of Guangdong’s Foshan city, had been sold on Wednesday before the release of the test results on Wednesday night.

The IACM has informed its mainland counterpart about the incident, Ung said.

She said the import of live poultry from the mainland to Macau was expected to resume on Saturday. After the press conference, an ICAM spokesperson told reporters that any live birds imported into the city must be quarantined for a night, pointing out that therefore it would only be possible for residents to purchase live chickens from Sunday, Chinese New Year’s Eve.

During the press conference, Vong said the government had been culling all the 15,000 chickens at the city’s only poultry wholesales market near the Barrier Gate checkpoint late last night.

Addressing the press conference, SSM Director Lei Chin Ion said the bureau was still trying to contact the male owner and a male and a female worker of the stall. The bureau will take the three people to isolation rooms at the public Conde de Sao Januario Hospital Centre (CHCSJ) for a 10-day medical observation.

Lei said that all residents who visited the market yesterday could call the Health Bureau on 2870 0800 for medical assessment if they have a fever or symptoms of respiratory illness. They should wear a mask and avoid using public transport, the SSM director said.