Court of Final Appeal (TUI) President Sam Hou Fai called for a careful reflection on Macao’s Portuguese-style legal system that has been inspired by the one in Portugal. 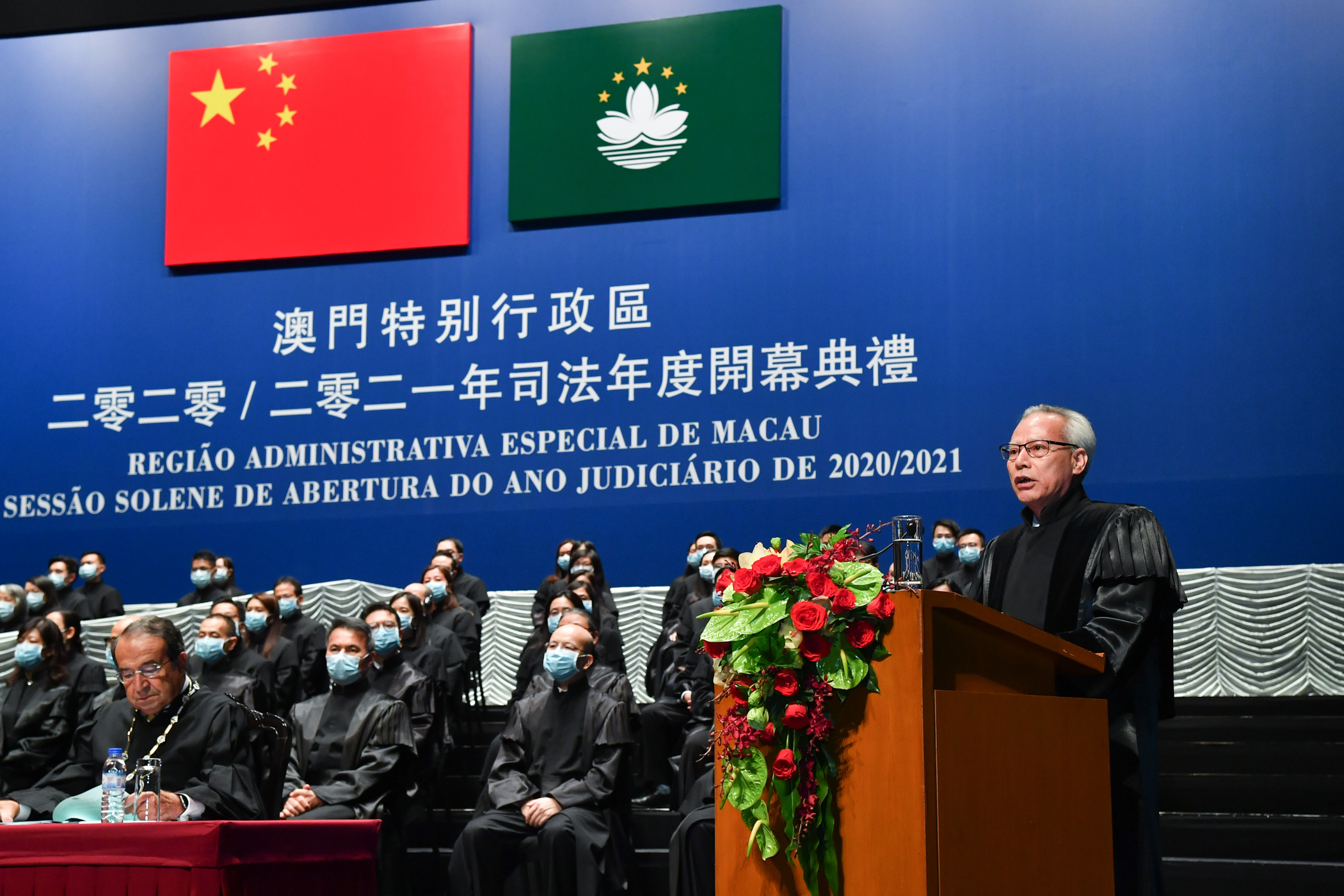 Court of Final Appeal (TUI) President Sam Hou Fai called on Wednesday for a careful reflection on Macao’s Portuguese-style legal system and heedful analysis of the challenges and problems coming along with implementing a legal system that, for historical reasons, has been inspired by the one in Portugal.

Sam made the remarks in his speech during a solemn ceremony marking the opening of the Judicial Year.

Macao’s top judge pointed out that Portugal’s ethics, value system, customs, cultural heritage and many other aspects “diverge considerably” from those in Macao. He underlined that while Portugal is a European country, Macao is part of the Far East that has its own culture and a multimillennial history. He said that it was difficult to transfer a legal system from a country with 10 million inhabitants and an area of nearly 100,000 square kilometres to a small jurisdiction like Macao’s that has a population of just about 600,000 with an area of only about 32 square kilometres.

“These disparities deserve our attention when drafting and implementing the law, and we must face them with immense foresight,” Sam said.

Sam mentioned as an example of the stark socio-cultural differences between Macao and Portugal the issue of recusal, i.e. the withdrawal of a judge or prosecutor from a case on the grounds that they are unqualified to perform certain legal duties usually required from them because of a possible conflict of interest or lack of impartiality.

Sam said that the issue of recusal was problematic in a small society like Macao’s where the great majority of the population are ethnic Chinese who hold close interpersonal relations in high esteem.

Macao’s top judge said that in the past, on average, every year about 20 cases were affected by a judge’s recusal in the Court of First Instance (TJB). However, in the first half of this year alone, the number of such cases rose to 70 in connection with property buyers of the ill-fated Pearl Horizon development project, Sam pointed out, adding that local judges needed to carefully approach the relationship between interpersonal relations and the Judiciary, requiring them to maintain an “adequate distance” towards civil society, in order to avoid being implicated or being taking advantage of.

Sam also revealed that Macao’s courts handled 20,000 cases in the previous Judicial Year, a decrease of 7.63 per cent.

Meanwhile, Public Prosecutor-General Ip Son Sang underlined the Public Prosecution Office’s commitment to tackling child sex abuse and domestic violence as well as money laundering and terrorist financing cases. Ip also underlined that the number of cases investigated by prosecutors in the previous Judicial Year fell by 18 per cent from the preceding one to 12,109.

Chief Executive Ho Iat Seng, who rushed back from attending a ceremony presided over by President Xi Jinping in Shenzhen on Wednesday morning to attend the Judicial Year opening ceremony at the Macao Cultural Centre in the afternoon, reaffirmed in his speech that the rule of law continues to be one of the fundamental principles of the Macao Special Administrative Region (MSAR). Ho also said that the MSAR would persist in defending the judicial system’s independence and impartiality.

Macau Lawyers Association (AAM) President Jorge Neto Valente said in his speech that the COVID-19 pandemic has resulted in a strong decrease in the income of the city’s 446 lawyers and 133 trainee lawyers employed by 100 law firms.

Neto Valente also pointed out that Macao could be negatively impacted by foreign countries’ attempts to restrict China’s economic influence in other countries and impair its development.

Neto Valente also said that what mattered was not the quantity of cases handled by the Judiciary but the quality of how the courts handle their caseload.